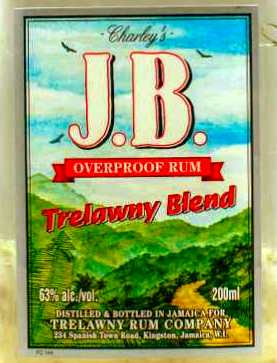 Just about every rum junkie has heard of the J. Wray & Nephew 63% Overproof, Appleton’s flagship white lightning and that’s likely the variation that most people know about and have tried. But since the 1990s, there’s been a local hooch, the Charley’s J.B. White Overproof (made by the Trelawny Rum Company which Appleton controls), primarily marketed in the backcountry…at that time it was aimed at rural farmers and considered a sort of 2nd tier tipple. In 2015 the company decided to issue it to the urban market perhaps because people in the cities were getting annoyed at those wussy little forty percenters they had to suffer though, wondering why “dem lucky bredren in de backdam gettin’ all dat good bashwar”, and wanted to get something from near by Cockpit Country that would pack more animal in its jock. And aside from actually stating that the Charley’s JB is a “Trelawny blend,” I’m not sure there’s much difference between it and the JW&N 63%. Most people who’ve tried it just love the thing for its fiery, fruity and powerful taste. 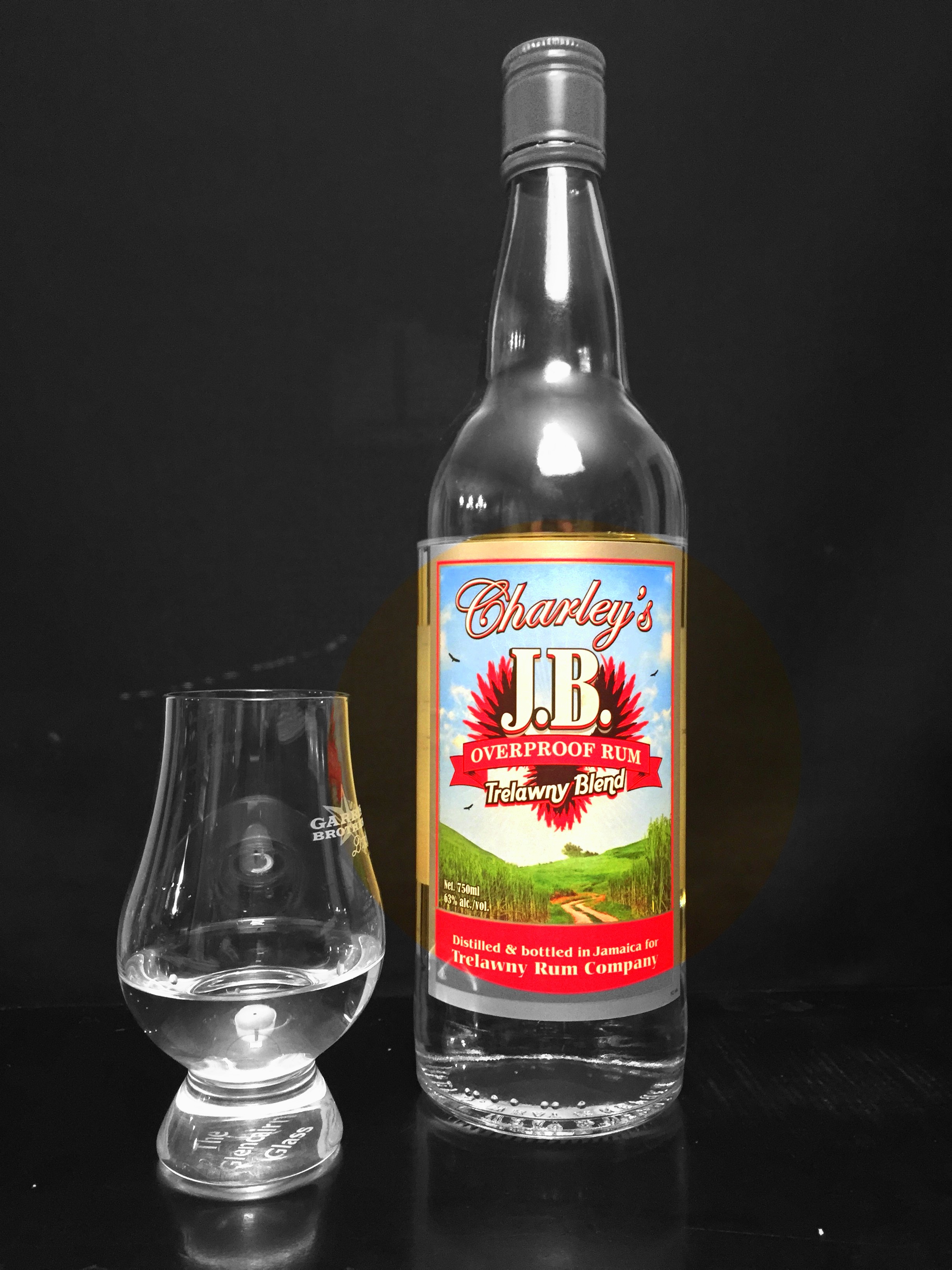 Like DDL’s Superior High Wine, or the Rum Nation Pot still white 57% — and of course the Haitian clairins — it channels a sort of barely contained ferocity. No easy lead up here: the rum puts you in the middle of the action immediately, with the very first sniff of the cap when cracked, so it’s probably a good idea to go easy for the first few minutes and let the alcohol burn off a mite. Do that and you sense salty, fusel oil fumes, with sharp rubber, acetone, musty cardboard and leather vying to see which can skewer your schnozz the fastest. It stays sharp, and is like breathing the inside of a vulcanizing shop in hot weather, but it does develop well (if grudgingly), and aside from a weird glue aroma, a watery fruity punch of bananas, citrus, unripe green apples is also there, tied up neatly with the rich scent of new leather shoes still in the wrapping paper.

Tasting it more or less continues the experience and I am here to assure you that yes, to some extent, it really does smoothen out…just a little (well, it is 63% ABV, so you can’t expect too much). Sweet watery pears, white guavas, watermelon, cucumbers, some dill and rosemary, squash segue their way across the tongue. The crisp tartness of the nose mellows into something more akin to plums and blackcurrants with a flirt of gooseberries thrown in, if you can believe it, but just add a little water (coconut water might be better), and the feral beast goes quiescent in labba time. The finish? Nothing shabby – nice, long, fruity, estery, sugar water and soursop ice cream, plus the faintest bit of rubber and smoke. Overall, it’s a crude iron axe, not a sword made from Damascus steel, and that’s apparent all the way through….but “little axe does chop down big tree” as my great aunty Sheila always used to tell me so sanctimoniously.

Frankly, I’m amazed that Quazi4Moto, my correspondent on reddit, agreed to spot me a sample (many, many thanks to the man for sending it along). This isn’t the best white ever made by a long shot, and it shows its cheerful working class origins clearly…but it sure is a unique one, a taste bomb of savage, raw quality, and if it belonged to me and I knew I wasn’t going back for rice and peas any time soon, I’m not entirely convinced if I’d have shared it myself.

See, I’m aware it’s powerful and uncouth and needs some dialling down, and them crazies who quaff it neat are clearly purveyors of over-the-cliff machismo who are afraid of absolutely nothing; and to be sure, it proudly struts a massive codpiece of taste that falls this side short of a mess, and which will curl your toes without busting a sweat. But you know, in its own way it’s a really freakin’ cool white rum. So what if it’s untamed and maybe too sharp? So what if it growls down our throats as if mixed with undiluted tiger blood? It’s in no way a bad hooch, and those who make it past their initial despite might find themselves – like me — breathing hard, grinning stupidly, and nodding that yeah, they’ll take another shot. Maybe two.

According to the Cocktail Wonk’s informative post, in the good old days, such rural backwoods rums were undesirably-congener-rich heads and tails cuts pilfered from the distillery process, which gave rise to the humorous grumble that it tasted “like a John Crow batty” (in Jamaican creole it refers to a vulture’s ass…quite poetic, yes?). I wonder if it’s a coincidence that the initials CJB of the rum are the same, if out of order. I can’t find much data on who Charley was, or what J.B actually stands for. Maybe I’ll have to go to Jamaica to find out. 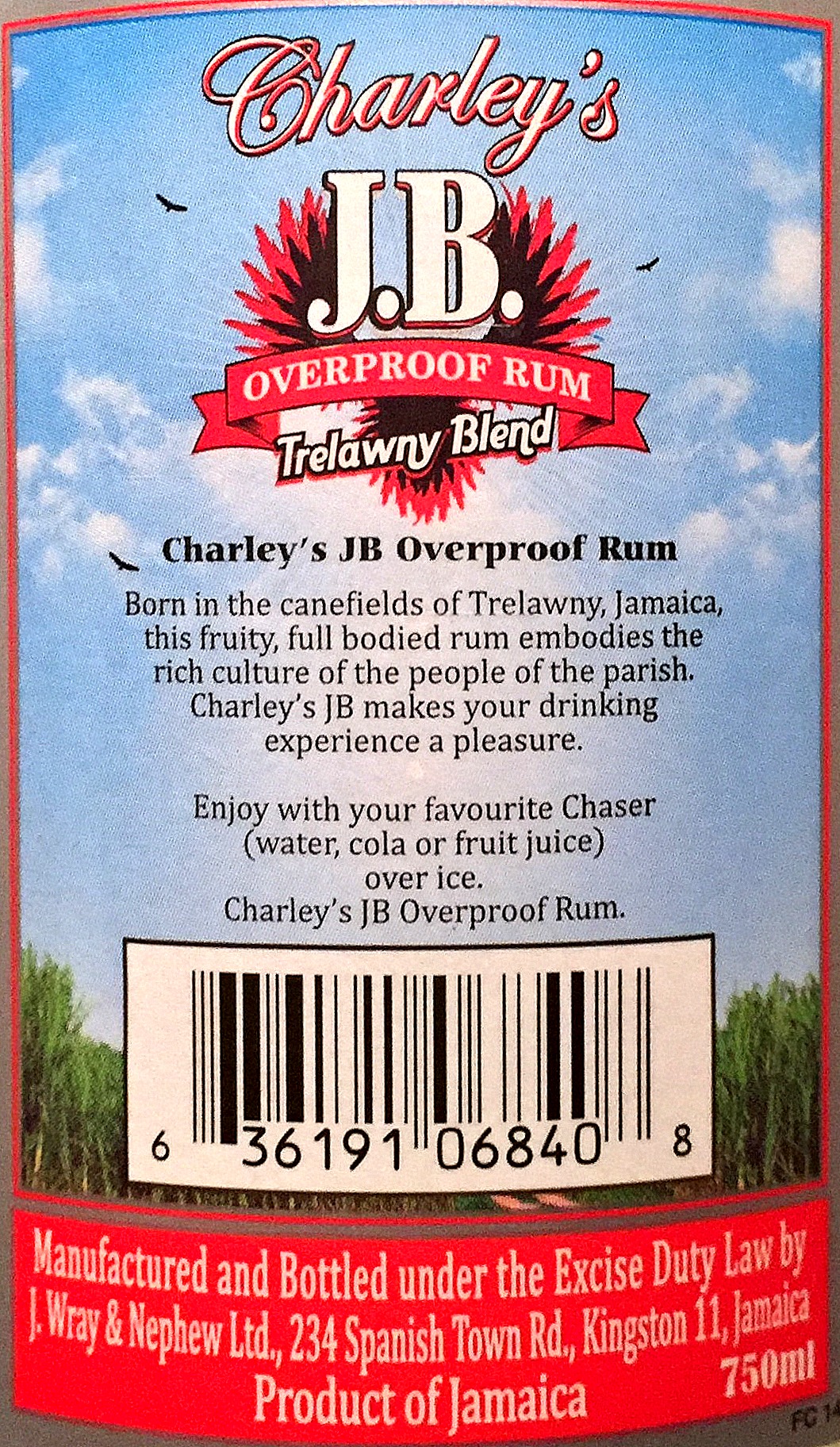