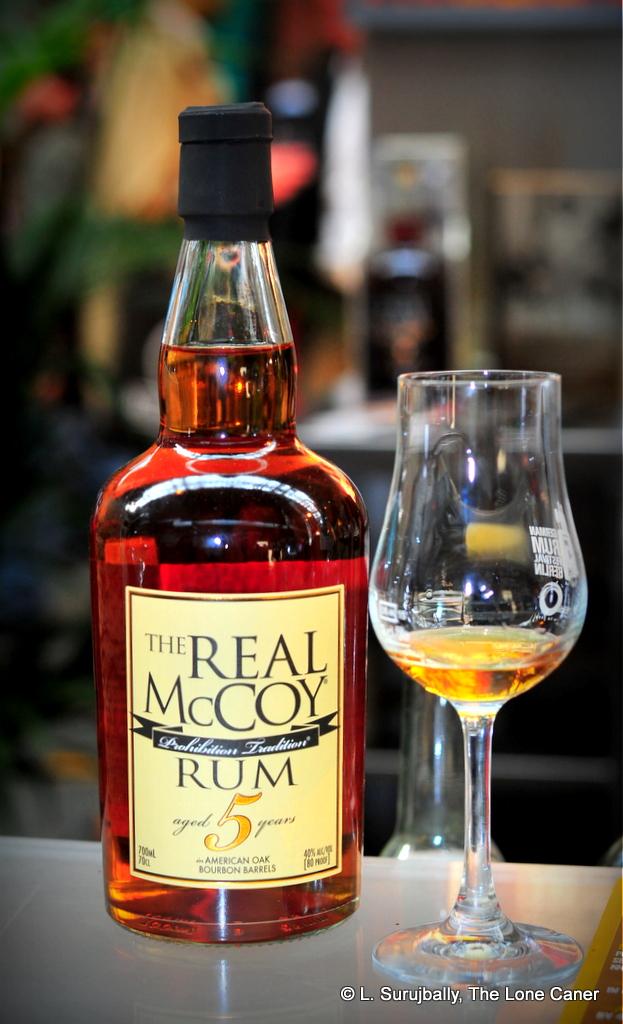 Last time around I looked with admiration at the St. Nicholas Abbey 5 Year old, suggesting that in its unadorned simplicity and firmness lay its strength…it didn’t try to do too much all at the same time and was perfectly content to stay simple. It focused on its core competencies, in management-speak. Yet that same day, just minutes apart, I also tried the Real McCoy, another Bajan five year old, and liked it less. Since both rums are from Barbados, both are unadulterated, and both five years old, it must be the barrels and original distillate. As far as I know the St Nick’s is from their own pot still, and the McCoy from a blend of pot-column distillate out of Foursquare, and they both got aged in bourbon barrels, so there you have the same facts I do and can make up your own mind.

Just some brief biographical facts before I delve in: yes, there was a “real” McCoy, and as the marketing for this series of rums never tires of telling you, he was a Prohibition-era rumrunner who would have made Sir Scrotimus weep with happiness: a man who never dealt with adulterated rum (hence the “real”) didn’t blend his stuff with bathtub-brewed popskull and never added any sugar, and bought occasionally from Foursquare, back in the day. Mr. Bailey Prior, who was making a documentary about the chap, was so taken with the story that he decided to make some rums of his own, using Mr. Seale’s stocks, and has put out a 3 year old white, a 5 year old and a 12 year old. 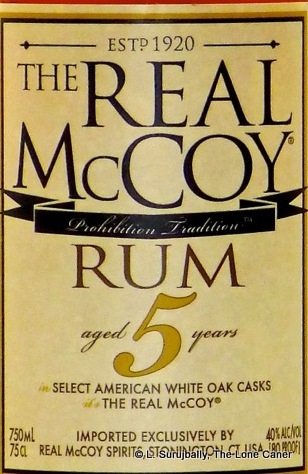 So here what we had was a copper-amber coloured 40% rum aged for five years in used Jack Daniels barrels, which presented a nose that was a little sharp, and initially redolent of green apples and apricots. It was slightly more aromatically intense than the 3 year old (which I also tried alongside it), and opened up into additional notes of honey, dates, nuts, caramel and waffles. The issue for me was primarily their lack of intensity. “Delicate,” some might say, but I felt that on balance, they were just weak.

Similar issues were there on the palate. It was easy, no real power, and reminded me why stronger rums have become my preference. However, good flavours were there: cider, apples, citrus, sharpness, balancing out vanilla and vague caramels. There were almost none of the softer fruits like bananas or fleshier fruits to balance out the sharper bite, and this was reinforced by the oak which came over in the beginning (and took on more dominance at the back end)….so overall, the thing is just too light and unbalanced. This is what proponents of the style call genuine, what lovers of 40% Bajans will name “excellent”, and what I call uninteresting. Overall, and including the short, light, here-now-gone-in-a-flash finish, it displayed some of the same shortcomings I’ve associated with many younger and cheaper rums from Little England – there just wasn’t enough in there for me to care about.

Leaving aside the stills, I’m at a loss to quantify the reason why the St Nick’s presented so much more forcefully than the McCoy given their (relative) commonality of origin and age and lack of additives. The McCoy five gave every impression of being dialled-down, and has too little character or force of its own, no indelible something that would single it out from its peers: the El Dorados for all their sugar at least have some wooden still action going on in there, the St. Nick’s is firm and unambiguous, and even the Angostura five has some aggro underneath its traditional profile But all we get from the McCoy is a sort of wishy washy weakness of profile and a failure to engage. Torque it up a little and we might really have something here…until then, into the mix it goes.