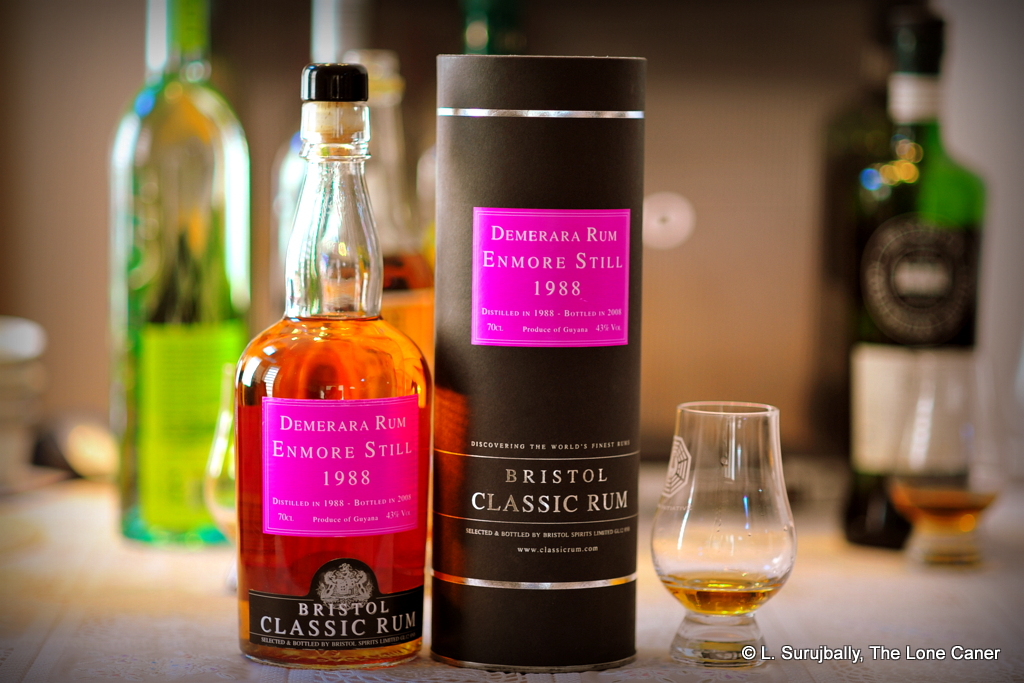 A slightly discombobulated Enmore from the year Feynman died and Rihanna was born. I wonder if that says anything about it?

Bristol Spirits is a UK independent bottler formed in 1995, and so can no longer be considered a new kid on the block. Its label design has gone through several iterations before settling on the current wildly coloured labels that so kidnap your eyes when you spot them on the shelf, and unlike some other indie bottlers, they pretty much issue all their rums at what they consider the appropriate strength, usually between 43%-55% with outliers at 40% in existence. Like, say, Compagnie des Indes, they mostly bottle rums from all the usual and comforting locations – Barbados, Jamaica, Guyana, Cuba, Trinidad — while occasionally indulging themselves with diversions to less common places like Mauritius, Nicaragua, Peru, Haiti, Grenada and Guadeloupe.

Some basic details on provenance: the Enmore continuous wooden coffey still is the only one of its kind extant, and while it is not a hundred-plus years old (the greenheart wood has been gradually replaced over the decades) it is well-used and still in operation to this day. The company notes on the rum speaks about being made from the pot still made by John Dore in 1880, but I suspect this may be in error, since these are actually two separate stills, the John Dore pot still is not made of wood (or from Enmore as far as I know), and the Enmore still is not a pot still. So let’s just assume this came from the wooden Enmore coffey still and move on before everyone falls asleep or breaks out the Rambo knife to settle the issue.

Right, with all that out of the way, what have we got here? A dark hay blonde 43% spirit bottled by an always-interesting company, from a country and a still for which I have a fond regard. And, I must admit, some very strange tastes, that seriously made me check my glencairns to see if they had been washed right: because I was asking myself, did it get stored in the pantry to near the spices? The initial nose was light and warm and provided comforting smells of vanilla, raisins, licorice (the red kind) and a trace of sealing wax and turpentine…but there was also an undercurrent of garam masala, tumeric and drier indian spices coiling around in there that was as bizarre as Jessica Rabbit’s decolletage. I wasn’t complaining, mind…it just seemed out of place, and at least it didn’t derail the entire experience, being too vague to dominate the profile. Anyway once the rum settled into its paces, more familiar notes of caramel, toffee, nougat and crushed walnuts emerged, with a dry kind of sawdust mustiness pervading the thing. I can’t say it overwhelmed me, though it was pleasant enough.

Palate was better, much better: more light bodied than the initial impressions above would suggest, as awkward as Tom Hanks in his new “Big” grown up body. Initially presenting an almost-hot, briny foretaste, it developed really well with muted individual detonations of raisins, vanilla, dried fruit, apples just starting to go, some more licorice, some molasses, a flirt of citrus peel and again, those odd spices creeping around like John McClane serving up a little chaos in the mix – and these aren’t complementary sweet breakfast spices but sere, aromatic, powdery, crisp-smelling piles of spices on an open table (saffron, paprika, masala, more tumeric, cardamon, cumin)…it felt like walking through an open-air spice souk in the Middle East (oh wait…). The finish was actually quite good: I hadn’t expected something so assertive from a 43% rum, but it delivered – a little sharp, more of that driness, caramel cream, brine, vanilla ice cream, cherries, licorice and some last hints, very faint, of nutmeg.

Okay, so in the sense that the rum was an oddball, it diverged from a more standard and familiar profiles, and showed more potential than delivery (much like Windows 2.1 did), while retaining the power to interest and enthuse. It was not a depressing experience, nor a dour one (I was watching “Grave of the Fireflies” off and on as I made my notes, hence the comment). It was more a reminder of how a single still can produce several different variations on a theme, the way it was suggested that Old Enzo kept making the same car, just sleeker and better and faster each time. Consider: the Velier Enmore 1988 (issued at 51.9% and one year younger) was more brutal, more intense, but better behaved, with flashes of brilliance; the Renegade Enmore 1990 hewed more to a standard profile (and wasn’t an Enmore anyway, but a Versailles), Secret Treasures Enmore 1989 was firmer and darker, while the El Dorado EHP wasn’t as complex. Nobody who’s had that many varieties of a single still’s rum can ever say they were running on empty…there’s something for everyone here and you won’t feel short changed if you manage to find Bristol Spirit’s version on some dusty shelf in a back-alley shop someplace, forgotten and ignored, and you snap it up. 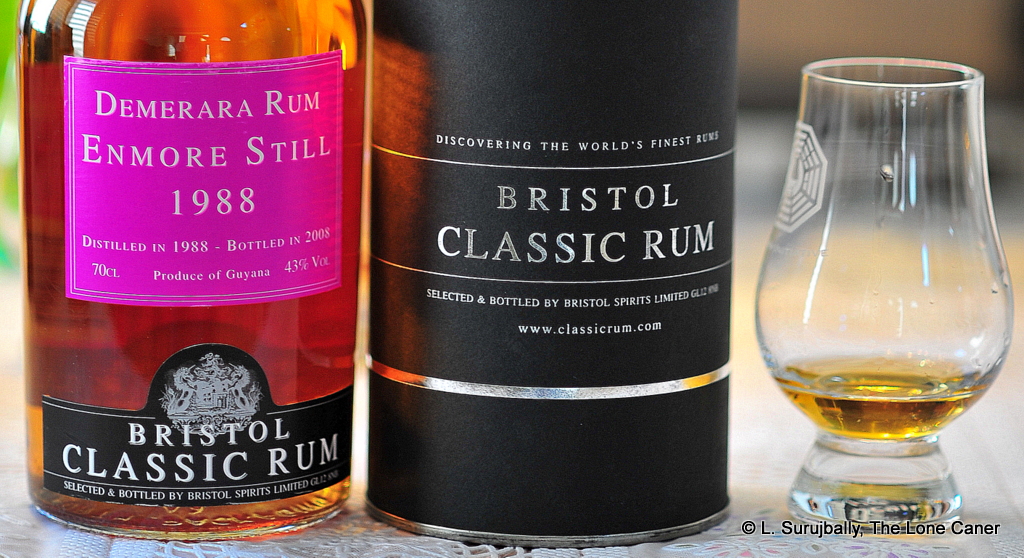