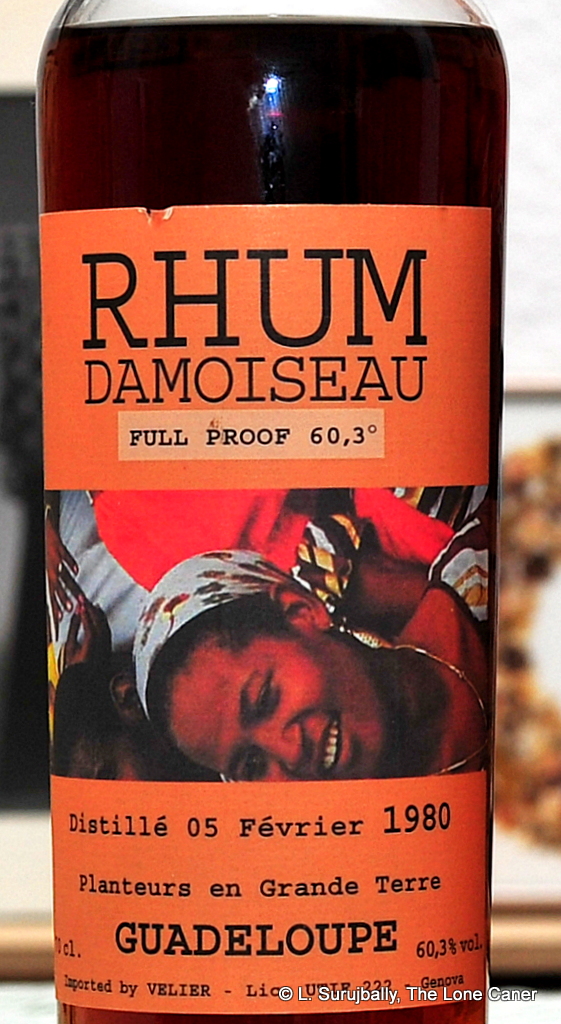 A marriage of the best of agricoles with the best of molasses-based rums. We close off 2015 with the spectacular 2002 rum that opened the Age of Velier.

Velier is better known for the pioneering full-proof Caroni and Demerara rums which have garnered it so much acclaim in the past decade; and more recently they have raised their profile even more with the issue of the Clairins, a close association with Richard Seale, and the “Gargano classification.” Yet rum aficionados who track this company know that the true beginnings of its rise are contained within the first issue they ever made – the Damoiseau 1980.

There’s a story here, of course. Luca Gargano (to speak of him is to speak of Velier) had bought into the small Genoese concern in the 1980s. In the late 1990s, in his travels around the Caribbean, he tried the 1980 stock from Damoiseau (in Grande Terre, Guadeloupe), which was considered spoiled by a proportion of molasses in the rum, supposedly rendering it unsellable (perhaps because it diverged too much from their standard product profiles, or, more likely, because it did not match the AOC criteria, as the back label attests). Rather than attempt to bottle it as it was, they put it on the market as a bulk sale, and feeling it was an undervalued masterpiece, Luca bought the entire stock. Velier issued it in 2002 at cask strength and it became the product that made the rum world (small as it was) sit up and take notice.

Observing the rhum, you see many of the hallmarks that would become better known in the years to come, and some that were in the process of gestation. The bottle was taller and thinner than its descendants, and the label lacked the puritan simplicity of later issues. Like Damoiseau’s own 1980 bottling from four years earlier, it was released at cask strength, and exhibited the same high level of quality. Perhaps more so, because while it is claimed not to have aged in the resting period between 1998 and 2002, I have my doubts about that, and felt that it very slightly edged out the Damoiseau edition.

Velier’s version was distilled in February 1980, vatted in 1998, and then issued in 2002. In the interim, it was stored for four years in a foudre (a large wooden container, meant to be inactive, where it would rest without further evolution), and so I’ll be conservative, take that at face value, and call it an eighteen year old even though you could argue, and I believe, it’s four years older. The outturn was 1,200 bottles, so it’s getting rarer all the time, alas.

Still: what an eighteen year old it was. Bottled at 60.3%, the dark brown rhum with flashes of red had a stunning nose. Deep, spicy and hot, it was an iron fisted nasal assault encased in a not-so-velvet glove. “Massive” might not be overstating the matter. Initial scents of flowers, sugar water, light molasses and vanilla permeated the room almost immediately upon opening. I had expected something deeper, more pungent, yet initially all I notes was a certain lightness and delicacy. This was only the beginning: it gained strength and depth as time wore on, and the flavours intensified to rose water, enhanced by a dusting of brown sugar and caramel, light oak, honey, treacle, red licorice and butter cookies. There were some more herbal and 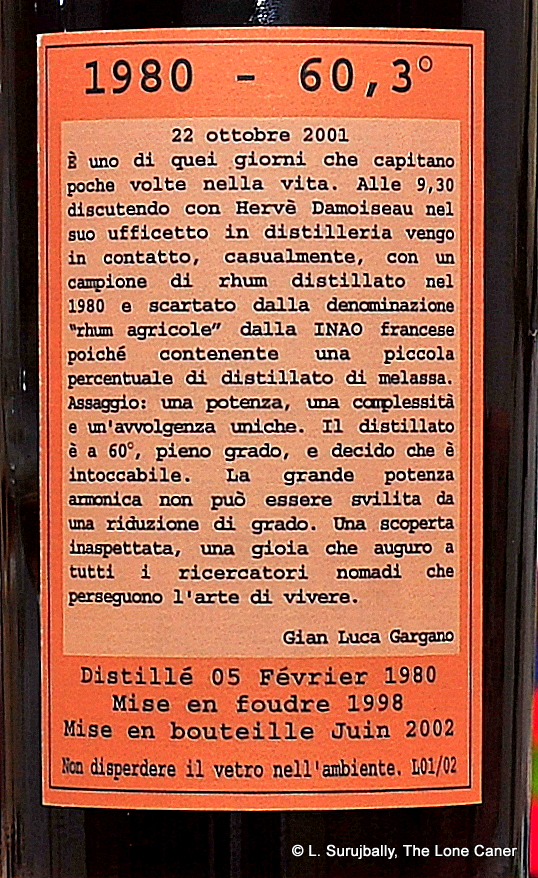 grassy elements in the background, serving to swell a note or two without ever dominating the symphony

The rhum was enormously self-controlled on the attack, to use the extremely apt French word. It was very heated (come on, 60.3%?…of course it was), but not unbearably so. Thick and oily, almost full bodied. Once some dry, salty notes seared the mouth and faded away, tastes of salt butter, cream cheese (a nice brie, perhaps) and rye bread briefly danced around, before being replaced in the lineup by light rose hips, honey, almonds, fennel. And then darker, deeper flavours emerged with water – peaches in syrup, or even cherries – thank God the sweet was very well reined in and controlled. Closing tastes of molasses, anise, caramel, some leather were noticed, and I have to stress how well balanced all this was. The finish was appropriately long, a little dry, with honey, pears and almonds. It was actually quite amazing how little agricole-ness there was in the overall profile, yet it was there. And what there was melded extremely well with more traditional molasses tastes – it was this which probably made Luca believe it did not have to be marketed or sold as an either/or proposition, but as a beautiful amalgam of both.

I was as impressed with Velier’s edition as I was with Damoiseau’s own. They are both spectacular, and tasting them side by side showed their common origins quite clearly. On balance there wasn’t much to choose between them except that I thought Damoiseau’s presentation was better, while Velier’s actual rhum exhibited a shade more complexity, some tiny smidgen of quality that made it score a half point more. But no matter – I’d buy any one of these again in a heartbeat. They were and are enormously well-made rhums that use their strength and age to enhance the good rather than disguise an off-note within (the way the AH Riise did with their Navy rum).

Normally, I feel that agricoles and “traditional” rums have an uneasy relationship when they are put together to duke it out (as Ocean’s distillery found out with its 1997 Atlantic rum). But then I remember Heraclitus, who remarked that “The counterthrust brings together, and from tones at variance comes perfect harmony.” In this particular case, I argue that such harmony occurred between the muskier tones of molasses and the lighter, herbal profile of the French islands. It’s rarely, if ever, been done this well — and perhaps the way in which disparate, even conflicting, philosophies can meld and gel and produce something so remarkable, holds a life lesson for all of us, rum aficionados or not.

Watch your step with the cork, which is very dry and fragile, and may crack as you try to open the bottle.

Damoiseau did not in fact sell all their stock to Velier, perhaps intuiting that someone as enthusiastic as Luca might have been on to something. It’s unknown how much they held back, but they went ahead and released their own bottling in 1998, at the same strength. Since Velier subsequently issued other Damoiseau rhums (the 1986, 1989 and 1995) as well, I doubt anyone is nursing a grudge.

Observe the cool factor of the beautiful lady on the label photo (one of Luca’s pictures, any surprise?). He was doing it to lend emphasis to the creole and black population (who comprise the majority of the labour force), and I suppose to perhaps tweak the noses of the industry leaders on the island, who are mostly békés. Damoiseau has gotten into a fracas over the last few years regarding labour practices and intemperate comments in the media, so maybe there’s a deeper, subtler joke going on here.

The back label roughly translates from the Italian as: “It was one of those days that happens a few times in life. One morning at 9:30, in discussion with Harvey in his office at the distillery, he mentioned that he had found, accidentally, a barrel of rhum distilled in 1980 and rejected by the French AOC for the designation “rhum agricole” because it contained a small amount of distilled molasses. The taste was a powerful complex envelopment. The distillate was a full 60° and I decided that I would not touch it. The great harmonious power it had could not be showcased by a reduction of a single degree. It was an unexpected discovery, a joy that I wish to all the searching wanderers who pursue the art of living.” Okay, so my Italian is about on par with my French, but that’s not a bad sense of the words, and knowing Luca, I’m pretty sure I caught the gist of his comments. 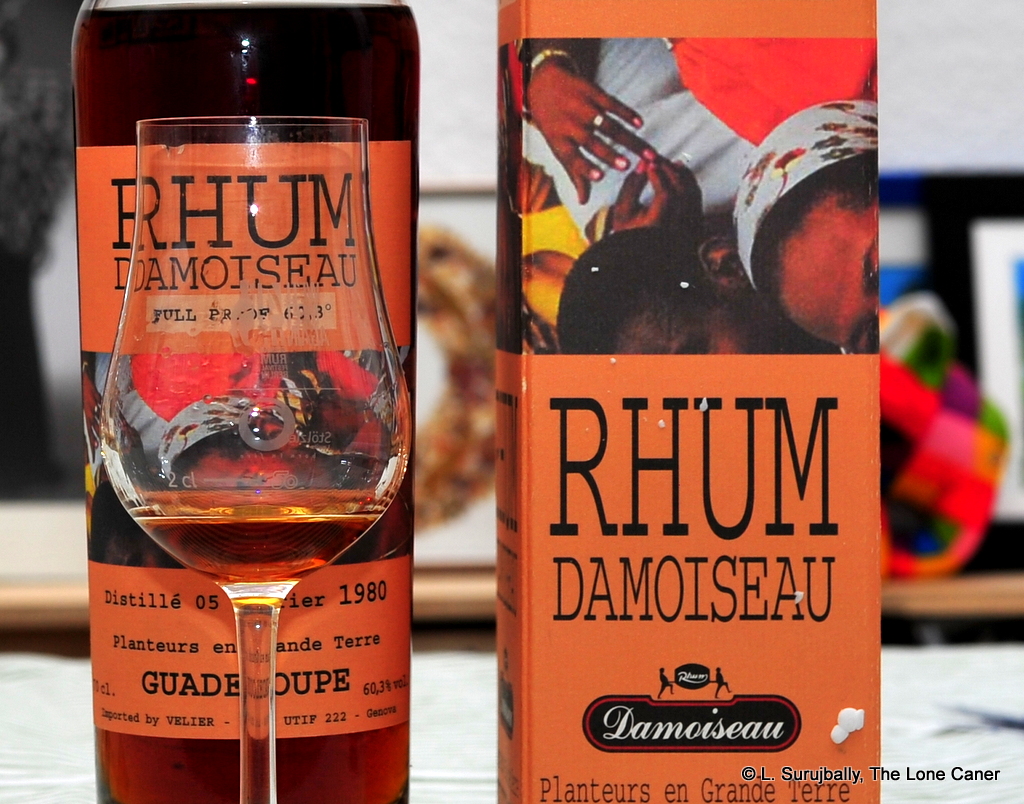