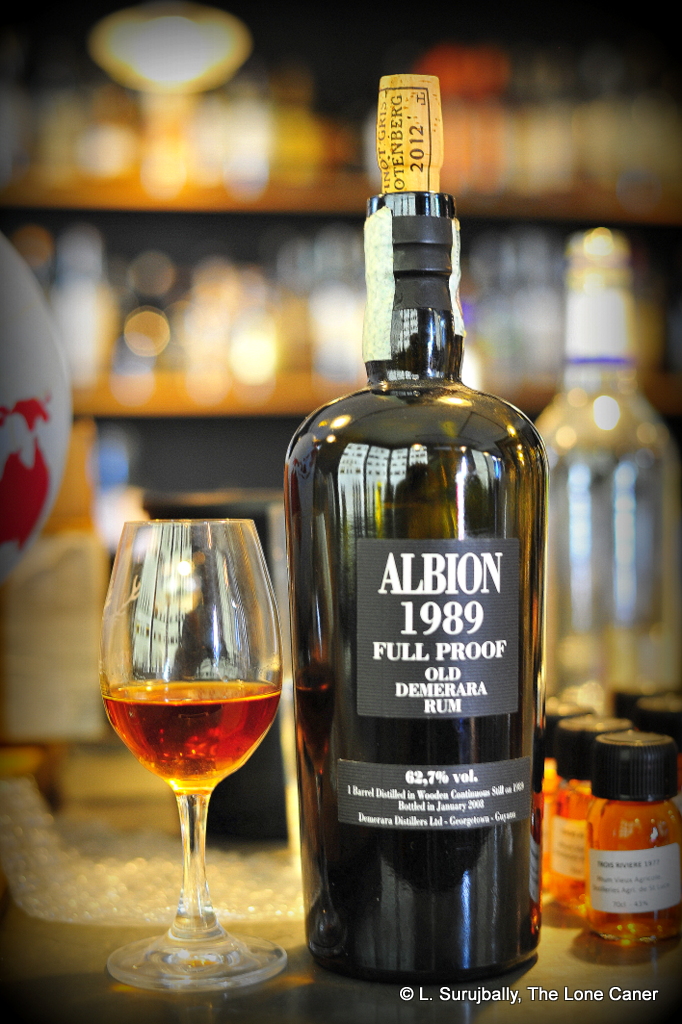 When you drink full proof and overproof rums for a long time, many forty percenters can seem, well…a shade pusillanimous. No such issue afflicts the 62.7% full proof of Albion 1989, ‘cause that thing looks and feels and samples like it’s about to father a nation.

The Albion 1994 was power and passion and style all wedded together in a remarkable fusion, and my only regret has always been that I couldn’t get more. It was preceded by a version from 1983, 1986, and this one from 1989. These days, the only place you’ll find either is from a collector or on the secondary market. And that wasn’t helped by the paucity of output for the 1989 either.

I’m always whining about craft makers bottling too few rums in their single barrel or cask strength issues, yet this one is bordering on the ridiculous – Velier only issued 108 bottles of the Albion 1989. Still, points must go to Luca Gargano, who resisted the temptation to blend this miniscule output with something else, and simply took what he could from the single barrel in 2008, added nothing, took away nothing, diluted nothing, tampered with nothing. And there you are.

When I poured the dark amber rum into my glass in Paris a while back (I was shamelessly pilfering tasting notes on anything in grabbing range, nearly knocking over poor Serge Valentin in my haste to get my grubby paws on this one), it was like coming home. Nosing it, I was struck anew how amazing it was that a rum can be made at that kind of strength and yet still maintain a smoothness of profile that doesn’t do a rabid dog imitation on your senses. The rum’s nose was immense – it smelled thick, creamy, like a melting licorice waterfall; black grapes, anise, caramel, burnt sugar billowed up, being chased by the sweet fresh honey from a cracked comb. I thought I’d get some wax or rubber notes, but nope, none here.

The taste of the 1989 was wired up, juiced up, and electrified like the Tokyo downtown, and you got into it immediately. I remember just shaking my head with admiration, even awe, after the first sip. The palate was full bodied, without equivocation. Thick and creamy, surprisingly sweet, and not dry or briny – but there was tobacco and rubber floating around in the background, some furniture polish and tar (actually quite similar to a Caroni). Dried fruits emerged, mango and papaya, some salt in the back taste. I added some water and it continued providing new, strong notes of vanilla, nuts, aromatic pipe tobacco and smoke, leading to a long, long finish, with rubber, melting tar, more smoke, more caramel, more vanilla. I kept a glass charged with this stuff for literally an hour, always coming back to it, always finding something else and still probably missed something. 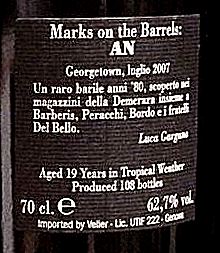 I’ve always enjoyed experiments in the craft like this, where the makers change just a single coordinate in the standard equation of the rum universe just to, I dunno, mess with it and see what’ll happen. Here, that’s a hell of a lot. Even with the overall excellent stable of rums Velier makes (and that’s plenty), there are rums and then there are rums. This, in my opinion, is one of the latter.

See, a rum like, oh, a Bacardi for instance, sells so much that it creates its own weather system in the spirits world. The Albion 1989 is nowhere near that league – at best it’s an intense, localized twister with a shard of lightning thrown in. Can you see yourself rushing out to experience that? Not likely. But if you’re a person looking at the world through slightly askew lenses, the phenomenal power and quality of something this spectacular cannot be overstated and after you’ve experienced it, it’s highly unlikely you’ll ever worry too much, in rum terms, about another cloudy day, threatening rain.