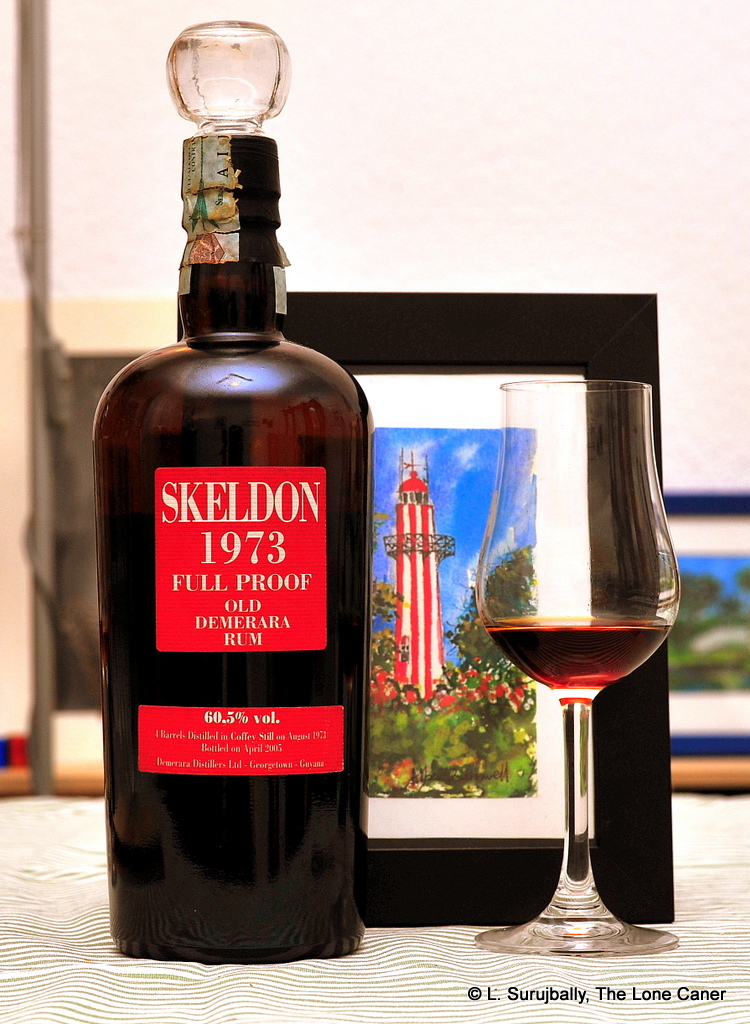 It’s official. Velier has raised the bar for super premium rums, with an extraordinary 32-year old blast from the past that will excavate a punt-wide trench in your wallet if you ever find one.

The 544-bottle run of the Skeldon 1973 Old Demerara Rum has, since being released in 2005, become something of an object of cult worship. In 2012 a single bottle went for sale on eBay for close to €500. I searched for three years before I found a gent in France willing to part with his (and at a cost I’m glad my wife never found out about). It isn’t very well known, except among rabid collectors, and the only reviews I’ve ever seen were in Italian and French. It is without doubt a rum from further back in time than anything else Velier has ever made, or perhaps will ever make. And it is worth every penny. Yes, I love Rum Nation, yes I have soft spots for Cadenhead, Berry Brothers, Secret Treasure, Plantation, El Dorado, Pussers, Young’s Old Sam and a score of others. But this thing is a cut above the crowd, and part of that is the way Velier mastered and balanced the subtleties trapped within the enormous tastes of a 32-year-old beefcake.

You’d be hard pressed to find anyone outside Guyana who knows about Skeldon, or where it is. It’s a plantation on the far east of the country, right close by the Corentyne River — I visited the area many times in my youth — and not, as some have mentioned, on the Demerara (all Guyanese rums are often noted as being Demeraras, but the pedant in me disputes the moniker). The original distillate was made in Skeldon before the still was shut down, and I’ve heard that the barrels were transferred to Uitvlugt before finding their final home in Diamond Estate, where Luca Gargano found the last four barrels from that year ageing quietly away in DDL’s warehouses, perhaps even forgotten by them: he snapped them up, and from that stock, made an old, bold bastard of a rum, eschewing the softness of a standard strength and allowing it to be issued at a mouth ravaging 60.5%.

The Skeldon 1973 was remarkably dark, molasses brown, deeper in hue than the PM 1974 I looked at not too long ago. Such was the skill of the makers that almost no time needed to be spent waiting for the spirit to open up in my glass: almost as soon as I poured it out, rich, powerful fumes of coffee, burnt cocoa, and smouldering sugar cane fields billowed out. Mellow aromas of peaches, nuts and licorice provided exclamation points of distinction, and these were followed by notes of honey, pecans and toast. And it wasn’t over yet: after half an hour, when I went back to it, I detected yet other traces of cherries, blackberries, and even a sly waxy taste that was far from unpleasant. And each component was clear and distinct, crisp and vital as tropical morning sunshine.

If the nose was extraordinary, so was the palate: intense without sharpness, heated without pain, and not so much full bodied as voluptuous. Cumin, tannins and a certain muskiness attended the initial tasting, with a briny undertone, all in balance. As these receded, other flavours came to the fore: coffee again, unsweetened cocoa, walnuts, some caramel, burnt sugar cane (as from the nose), almonds, hazelnuts and at the very bottom a wink of eucalyptus oil. Many rums I have tried often seem to come from the recycle bin: reblends, a new finishing regime, a little tweak here or there, but with the venerable core formula always intact. The Skeldon 1973 does a difficult thing: it feels original, cut from new cloth and yet structured around blending basics so seamlessly that it samples phenomenally well. It’s got a certain sumptuousness to it, a sense of extravagance and out of sight quality, as rich as the silk in the lining of a Savile Row suit.

As for the finish, well, its persistence may be as unique as, oh, the Albion 1994, or the SMWS Longpond 9. Fumes and final flavours continued to make their prescence felt for minutes after a taste, as if unwilling to let go. Coffee was prevalent, toasted hazelnuts, some caramel, all melded together into a fade that was a function of 60.5%, and lasted a very very long time, none of it wasted. So good was the overall experience that I must have had four or five tasting glasses of the stuff, just so that I could savour and sample and extract the very last nuance, and even then I’m sure I missed something. 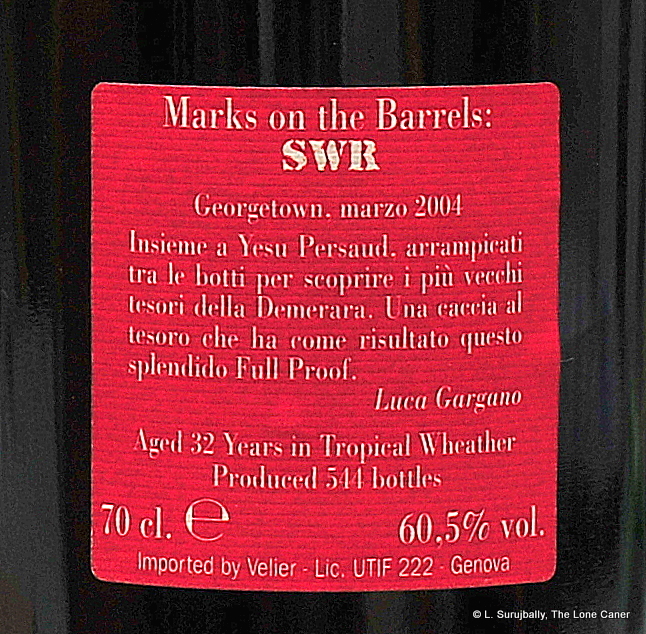 Everything works in this rum. Nose, palate, mouthfeel, exit, the whole thing. Usually I’m ambivalent about one point or another in a review – good points in one area are marred by small disappointments in others and this is why the “intangible” part of my scoring goes down and not up like all the others – but here there is such a uniformity of excellence that it made me feel re-energized about the whole business of reviewing rums (and, as an aside, that I may have underrated even the phenomenal UF30E which is about on par, and which I used as a control for this review).

What an amazing, fulfilling rum Velier has produced, indeed. Yes it’s extraordinarily hard to find, and yes its damned pricey. Good luck finding one in the States or Canada (or even in Europe, these days). I’m remarkably fortunate in that I was able to source an unopened bottle given its rarity. Luca Gargano, the maitre of Velier, has a track record with his bottlings that many can only envy, and is used to dealing lightning with both hands; and for no other reason this is why sourcing his products, old or new, is recommended. If you want to see what the industry can accomplish if they really try, spring some pieces of eight for what Velier is making, if even just the once.

Or try getting a taste of mine, if you’re ever in my neighborhood. I’m almost sure I’d share it with you.