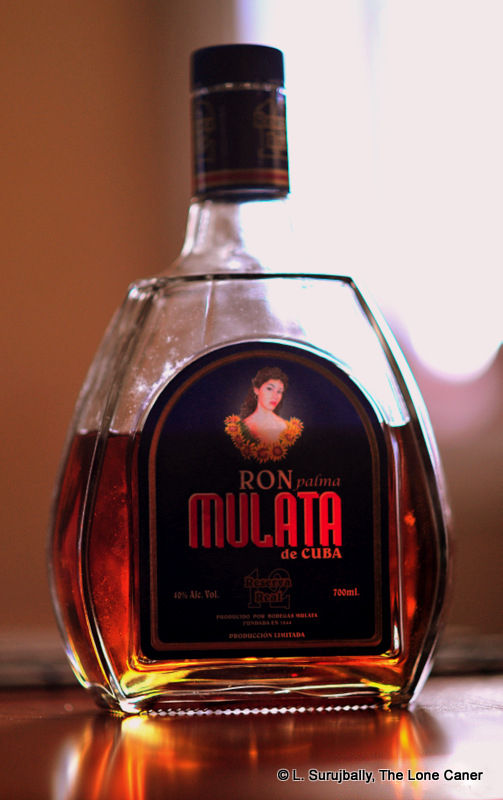 Strong beginning is marred by a disappointing failure on the back end stretch. This rum will one day (hopefully) be a good one…right now it’s merely serviceable. For a 12 year old, that’s quite a disappointment.

Stuart and Mary, two very good friends of mine, had the decency to leave behind an excessively hefty portion of their newly purchased Mulata upon their return from Cuba the other day. This was one of those occasions when I had to do the tasting and evaluation right away, which was perfectly fine, of course. We get Cuban rums around here – Canadians lack the curmudgeonly stubbornness of embargoing that country beyond all reason for over half a century – we just don’t get that much of it beyond the standard fare of Havana Club, Legendario and Matusalem. And as has been my custom of late, I sampled it in conjunction with the Cockspur 12 and the El Dorado 12, both of which I had been meaning to come back to for quite some time. Too bad neither Stuart or Mary stuck around for this — maybe, having reduced them to well-pickled insensibility with many of the older rums in my collection the week before (“How old?” was a frequent refrain until their power of coherent speech was much impaired by yet another shot), they were reluctant to repeat the experience quite this soon.

Distilled by the Cuban company Tecnoazucar, the 12 is one of a line of rums of various ages coming from that company, none of which I’ve ever seen or tried (largely because I don’t go to Cuba, and have few friends who, if they do, bring back anything for me to try, alas). Mulata is a word one might loosely term (feminine) half-breed or mestizo or Metiz or (in Guyana) “dougla.” It may not be politically correct to refer to people of mixed ethnicity that way in this day and age, but being one myself I can’t say it bothers me overmuch, since I am of the firm opinion that through diversity and much mixing comes excellence, beauty, and something better than either progenitor’s own antecedents.

Still, this is just a name for a rum, like Panama Red referring to a redhead, or St Nicholas Abbey to a real place. Nothing much should be read or inferred by such a moniker – the rum would stand or fall on its own. Proceeding on that assumption, let me present my findings, such as they are. To begin, an impressive lead in right off the bat was the sweet scent of port wine infused pipe tobacco on the nose. Soft wafts of red grapes just trending towards ripeness, a sort of winey aspect, mile and mellow, with little assertiveness or bite….this rum liked me.

The body of the Mulata was of a sort of medium texture on the arrival, and came with a heated (but not spicy) announcement of itself that was quite pleasing: not very sweet, and dry and leathery and smooth and buttery all at once: I wish I could have had some earlier iterations of the line to see how they improved it over the years. It had a decent mouthfeel to it, that closed matters off with a faint nutty flavour and a sly sort of citrus aftertaste that was like my seven year old boy when, upon a first intro, isn’t sure he wants to meet you after all and hides behind me. In summary, Ron Palma Mulata is reasonably complex…yet not married together as well as it might have been.

The finish is long lasting and heated – it scratched spitefully a bit, as if to tell me not to take it for granted – dry, with a slightly salty tang, exiting with a sense of nuts and damp sea air. Here I went back through the tasting a few more times, and gradually I came to the conclusion that the spiciness and slight raw edge to the rum, at end, make it somewhat less than it could have been. 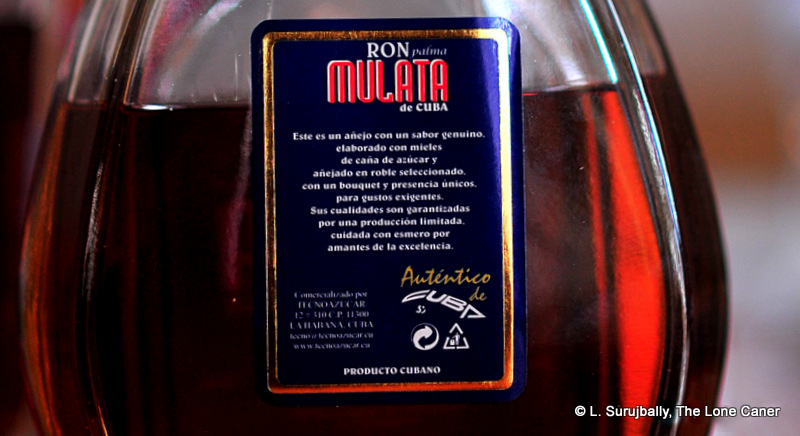 All this sounds like it’s a pretty decent product (my whinging aside), and to be fair, it is, had you never had anything else to run alongside it. It makes, for example, a lovely cocktail. The thing was, both the Cockspur and the El Dorado 12 (which I am appreciating more and more as I run other rums past it), and the agricole Karukera Cask Strength, exceed it. The taste and feel of the neat Mulata are decent enough and I’d recommend anyone going to Cuba to pick up a sample (if for no other reason than to get away from the better known brands and to stretch one’s taste buds a shade). Yet if I had to be brutally honest, I’d regretfully have to note that all things considered, the Mulata fails when compared to equally aged siblings from Barbados, Guadeloupe and Guyana. It may be because the spiciness of the Cuban style not being quite my thing, or it may simply be that the others are just tastier, smoother and of overall superior quality.

Part of this may be because Ron Mulata is a new entrant on the scene – my research notes it was formed in 1993 – and therefore lacks some of the historical experience, the generations of carefully nurtured blends and barrels and talent that the old houses possess. The Mulata range of rums stem from a sugar cane syrup base created by the maestro roneros of Tecnoazucar (a company that produces raw rum stock much like DDL in Guyana does). This rum is matured in 180 litre American white oak barrels which supposedly provide a lighter flavour profile and a distinctive bouquet.

Distinctive enough, I guess. Depending on who you ask or what you read, it may be one of the top selling rums in Cuba. That it’s a decent rum to be obtained locally on a visit to Cuba I don’t dispute, and I like it enough. But if this rum is good for anything, it’s to show how good other twelve year old rums are and can be, and, unfortunately, the flip side is that it shows up this rum’s few shortcomings as well. A decade from now it may be a world beater. Right now, it’s trailing behind other Caribbean products in my estimation, and as a rum lover, all I can hope is that as time goes on it will become a rum to watch.