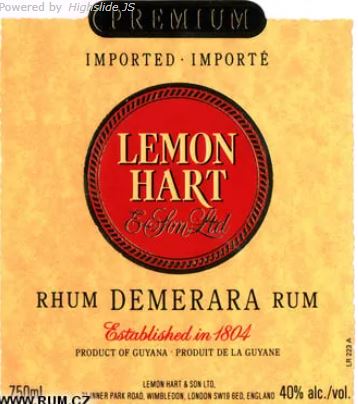 Lemon Hart is an instructive case study in how one can chose a rum without knowing a damned thing about it. As I’ve noted on more than one occasion, if you go into a store without a blessed clue, you are down to three bases for your decision and only three: the price; the look; and knowledge you have when you enter the joint. Anything different is somebody else choosing for you.

So here, what did I have? Well, the price for a flattie, which was less than twenty bucks; the look, which was simple and unadorned and referred to Demerara – perusers of my writing will know I have a soft spot for the old sod; and my knowledge.  Admittedly, I do have a bit of a larger base of knowledge than some, and so I had certain advantages there.

Knowing the history of the brand though, doesn’t mean anything.  It’s how good the rum in this brand is, in this bottle, that counts.  And I had never had any of Lemon Hart’s variations before, so I couldn’t tell whether any of its cousins were any good and extrapolate up or down, and therefore…well, in the end, I guessed.  How disappointing is that?

Lemon Hart owes its making to the Navy Rums of yore.  I’ve covered this in more depth in my review on the Pusser’s, but to recap, the British Royal Navy, as far back as 1655 until they abolished the practice in 1970, regularly issued a tot of rum to all hands in order to ward off scurvy (they added lime juice to the mix which is why I mentioned before that rum has been mixed since the beginning of its existence, and why Jack Tars are called limeys even today).  Navy rum by tradition is not heavily sugared or added to, which is also part of its distinctive cachet: Lemon Hart, Pusser’s and Lamb’s all pretend to this inheritance (for my money, the Pusser’s makes the strongest case, but that’s just me). Lemon Hart was one of the original suppliers of rum to the Navy, beginning in 1804; Alfred Lamb came a few decades later with his London Dock rum.  Both used raw rum stock that came from the Caribbean, mostly the dark, full bodied rums of Guyana.  Indeed, Lemon Hart states this quite specifically on the bottle I have: Demerara rum product of Guyana. But it is bottled in either Ontario or England.

Lemon Hart is a dark rum, 40% ABV, brown with reddish tints, and has the characteristic thickness and full body of Demerara rums.  When you swirl the liquid in the glass, it has slow fat legs sliding languorously back in. The nose, what there is of it, hints at straightforward rum without embellishment. You can tell it’s young from the harsh burning and medicinal reek, but this is swiftly gone, to be replaced with a powerful molasses overlay. Behind that is a slightly salty tang, just a hint of bitterness as if from some sort of citrus rind. On the tongue it demonstrates its youth with the rawness of the taste.  Yes it’s a bit oily and coats the mouth very nicely, but behind the molasses taste (which is quite overwhelming) and brown sugar, caramel and some fruit, there’s not much here: on the other hand, if simplicity is your thing, LH will definitely shine for you.  The finish is medium long and not very smooth, but since I wasn’t expecting much, it wasn’t too disappointed.

In summary then: a mixer’s rum for sure. Lemon Hart is dense and viscous enough to need only a reasonable addition of cola or ale or Christmas drinks or whatever else your poison is, but it does need it.  Once that is done, you have a decent drink you can enjoy at length without worrying too much about the overall price tag.  And if you have guests, you may even get some brownie points for taking the time to hunt out what appears, in other parts of the world, to be a drink somewhat harder to obtain there than it is here.

Note: There is also a Lemon Hart Jamaican rum bottled at 73% which I found many years later.  It was quite good, but no longer made. Lemon Hart is most known for its overproof, 151s and Navy Rums.  I’ve found a few over the years following this review.