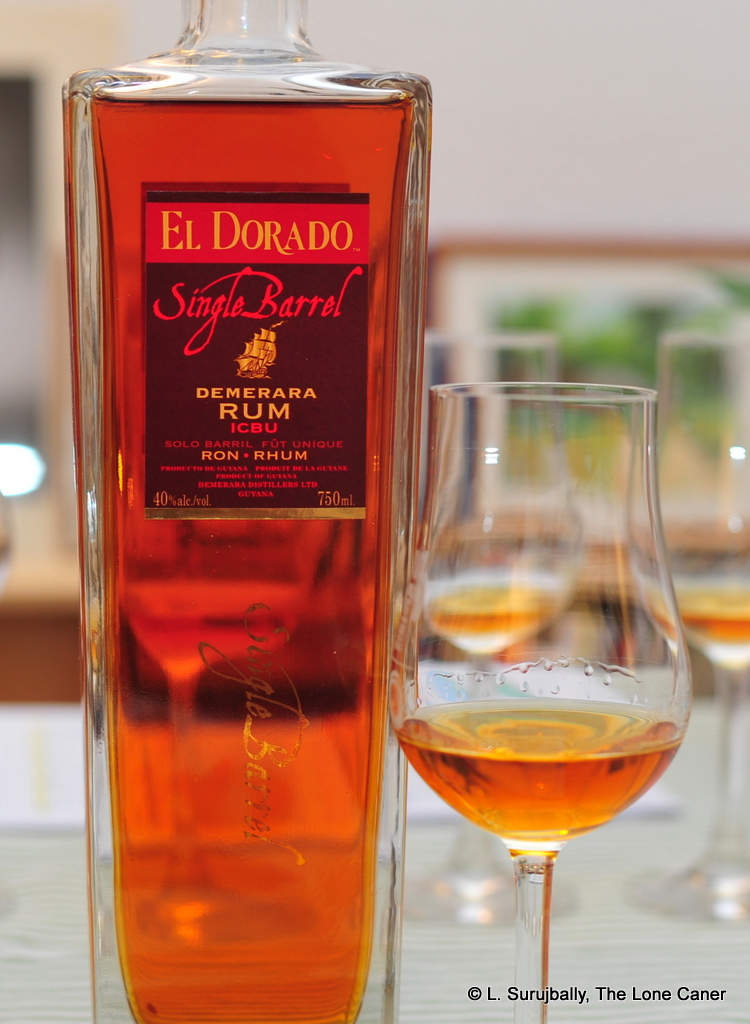 I always admire some level of originality, whether it is in food, drink, a book, movies or simply the way something looks. In an era of mass production and conformity, too much of what we buy or see is an exact copy of the same thing we bought or saw somewhere else. On that basis, I was quite happy to see Demerara Distillers’ square, tall bottle of the El Dorado Single Barrel ICBU when it was presented at the April 2010 session of the club, and since it was not only a rum, but from Guyana, I knew I was in for something interesting. Maybe the review would not be positive, but at least I would not have been bored during the sampling.

The El Dorado rum is made with the French Savalle Heritage Still from Plantation Uitvlugt (hence the ICBU marque), where a sugar factory has been functioning since 1753. It appears to be a blend as opposed to something specific and aged on its own, which is why once again there is no official age on the bottle – regular readers of my rum commentary will know this to be a personal bugbear of mine, though admittedly DDL is better than most in identifying senior blends with the age of the youngest component. Still, as it is somewhat lighter than the Special Reserve 15 year old – this may come from the fact that it does originate from a single barrel – I venture a guess that the main component of the blend is a ten or twelve year old (see other notes below this review). It is a curious matter that the DDL site makes no mention of this rum at all, at this time (2010).

The rum is a deep bronze redolent of burnt Demerara sugar, with nice legs hinting at a full, dark body. A certain woodiness attends the nose along with the faint toffee and sugar…it’s like a faint smell of new rain on sun-warmed wood chips, and nicely enhanced by the attendant caramel. In a way it reminded me of the aftersmell of burning cane fields at harvest time on the East Bank of the Demerara, where I once lived.

Neat it was a pleasant sipper; to my mind the smoothness of the taste was defeated by the somewhat harsher tannins and woodsy tastes the nose had hinted at. In recent years, the only DDL offering I have had was the stellar 21 year old (also reviewed on this site), and there the sharp tang of wood (I’m not yet so refined as to tell you what kind) was quite muted and blended well into the overall flavour profile. Here, less effort had been put in and the taste was therefore more pronounced. Not really in a bad way, but it did put off the sweetness of the rum quite a bit, and made it somewhat drier. Nutmeg and cinnamon came through clearly on the palate, along with coconut and vanilla, all somewhat overwhelmed by the pungency of the wood bite. I liked it better on ice, all things considered, and yes, as a mixer it’s excellent. The finish is long, and the burn lingers and that is not necessarily pleasant for all: it was not for me.

I hesitate to pronounce any kind of definitive judgement on this rum. As a reviewer who looks for certain things to describe, I must concede its taste and body. It’s intriguing, flavourful and while not as unique as the Bundy, quite forceful in its own way: and as I said at the beginning of this rum review, I am always appreciative of efforts at originality – it hints at a blender who is willing to go outside the box. As a man who has friends over, it would not be the first thing I trot out for my guests, however, since it goes a bit over the trench and off the plantation, so to speak. Oh, it’s a rum all right, and quite a good one: just a shade different…enough so that most people might take a glass or two out of curiosity, but then shrug and move on to more convivial and comfortingly familiar fare.