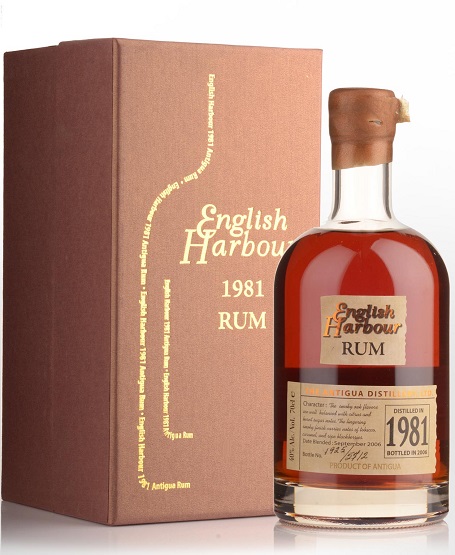 This was for me, for many years, one of the top five commercially available rums in the world. Not to be missed, even for the price. Four stars, triple A, I don’t care what you call it, this thing is simply awesome.

After gathering a ton of notes on rums from all points if the compass for most of 2009, it seemed appropriate to begin my official rum reviews with what is arguably the best – and the second-most expensive – rum I’ve ever tasted to this point in January 2010. Now I cheerfully admit to being something of a peasant and have no compunctions about using an expensive rum to dilute my cheap-ass coke if I think it a bit harsh, but for something this exclusive it almost seemed like sacrilege to let anything dilute it.

My friend Keenan and I were doing a rum run at Willow Park to stock up for a wings night (he who gets the largest raise buys the wings). For those who have never heard of it, Willow Park in Calgary may just be as Curt has described it – the best liquor store in Western Canada. Now Curt speaks from the misguided perception of his whisky-love (for which I have found the strength to forgive him), but there is little doubt that I have found more and better vintages of God’s water, more consistently, here than anywhere else. Browsing around, I saw this pricey bottle, read the label, hesitated and then, overcome by a fit of madness, bought the thing. It was all I could do not to wince as the price rang up (and if you think this is dumbass, just read my review of the Appleton 30 year old)

It was well that I parted with the bucks, I think, because even a lifetime of boozing didn’t prepare me for the quality of this baby…packaging, bottle, appearance, legs, colour, drink – all were uniformly top of the scale. I reverently cracked the sealed wax over the cork (Keenan’s wife laughed at us and our seriousness), bared our pates and bowed our heads, and took a neat sip each. And sat still, a little awed. This was, without question, the smoothest rum I’ve ever had in my life, one of the very few I’ve had without ice, and, at $200 for that bottle, it’s really pricey, but worth every penny. I’d have to say Keenan’s appreciation wasn’t far behind mine.

English Harbour 1981 is distilled by Antigua Distillery Limited from fermented molasses and bottled in 2006. It’s aged 25 years in used whisky and bourbon barrels and the subtle notes come through in the nose and taste. The copper and dark cedar color is sealed in with a wax-seal cork stopper that, when sniffed, gives a gentle nose of smoky wood followed by black cherry and currants. The initial taste doesn’t disappoint with more dry wood, caramelized dark fruit and roasted cashew in the body. And so, so smooth, it’s unbelievable – first rum I have ever had without even a smidgen of bite on the way down. The finish is dominated by smoky wood balanced with cinnamon and soft nutmeg tones. It’s like a liquid Hagen-Dasz caramel ice cream. If I ever get another one and feel like parting with that much money for the benefit of the peat-lovers, it’ll make the club for sure.

Highly, highly recommended if you can afford it (it runs into the El Dorado Problem, unfortunately, but in a pinch, the English Harbour 5-year isn’t half bad either at one-eighth the cost – I’ve got the review here as well). If only to apprise one’s palate of what rums can be at the top of the scale, buying this 25 year old is something a rum-lover should do at least once in his life.

Update March 2013: This rum has, of course, been superceded in my affections and appreciation of quality, which was inevitable given how many rums I’ve tried and written about. I still think, though, that if one was to make any list of the top five rums in the world, this one should be somewhere on that list.

Update October 2014: tasted this again at the 2014 Berlin Rumfest and scribbled some notes. Even given the evolution of my tastes to stronger and more intricate, original profiles, I’d still give this a solid 86 points. It loses some for lack of intensity at 40%, but the complexity of what is there remains lovely.