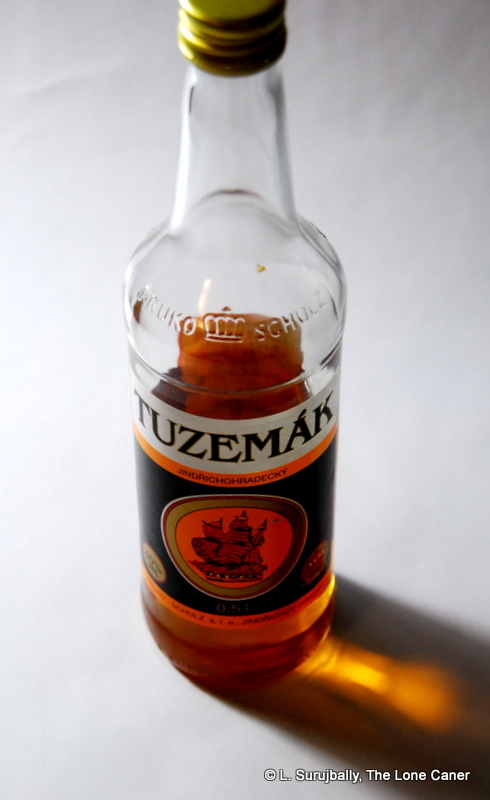 Herbal, different and like few other rums (we’ll be generous with the term) ever made; will add variety to cocktails and cheer to any Czechs you booze with, but my take is to exercise care when you have it neat.

We must establish from the outset that all labeling to the contrary, Tuzemak is not precisely a rum. This is because it was originally made from potatoes or beets, not sugar cane, and while you might find it in the rum section, it’s simply because the Czech manufacturers have in the past included colouring and taste additives to make it more like a real rum, and called it as such — you will note this label has no such word, not even “room” which some Central European spirits makers have used to get around EU regs. I’m no fan of over-regulation, and the EU has whole warehouses crammed floor to ceiling with them, but in this case their ruling that to be classified and sold as rum in Europe, the thing can’t be made from pommes-de-terre, finds much favor with me.

Which is not to say I actually despise the drink I bought on a whim at Willow Park the other day (my curiosity and nosiness will be the undoing of me one day, I fear). As a confirmed internationalist and pretender to cosmopolitanism, I try to take a more tolerant view of differences, and if this thing more or less looks like a brown drink, tastes sweeter than whisky and smells a bit like the good stuff, while being trumpeted as a rum in Czechoslovakia even though they have been forbidden to do so…well, I’m not averse to taking it at face value (The Last Hippie, who refuses to concede that there is any other whisky than the Scotch kind even as he snootily reviews what he terms “lesser offerings” in an effort to call himself fair, would probably be horrified at my laissez-faire attitude, but them’s the breaks).

Tuzemak actually means “domestic” in Czech, and simply refers to its down-home origins (not a maid). Called Tuzemský rum until January 1, 2003 — when the country became subject to the EU regulatory regime on spirits as a condition for entry — it is, like Stroh’s, something of a local institution, and made with an old, supposedly traditional recipe. Czechs are great beer drinkers, but they do like hard stuff as well: aside from the rum, there is both slivovice (a kind of plum brandy) and Becherovka, (a herbal 38% liqueur). This one seems to take the best part of tose and creates a drink for the people who never have drinks…just a drink, and then another drink and then…

Enough temporizing, then: what’s the story on the rum? 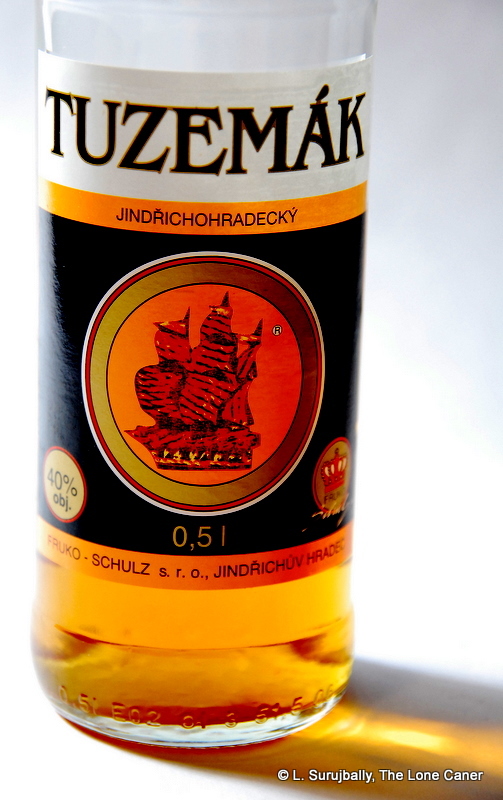 On the nose, it’s not too shabby. It’s a little pungent, a shade sharp, but as it settles, wafts of vanilla billow gently into your nose without too much sting or burn. There is a very slight medicinal undertone that kind of spoils the taste, but not so much as to seriously detract from the overall quality, just to show it’s not an aged product. What kind of blend it is – that is to say, what’s in it or how many differing ingredients there are – I cannot say. There’s too little information available.

The palate continues enhancing what the nose promised. As one tastes, the vanilla becomes more pronouced, keeping in step with a gradually increasing floral note, some kind of herbs (similar to the Stroh 54) and a faint liquorice hint that blends pretty well into the overall balance. It’s like a light sweet semi dry cognac, and for once I do not mean this in a bad way. It’s young and a little rambunctious, not too sophisticated…yet nice too, even as a low end sipper. The finish is short and dry and without serious sting or burn, the warm breath of the fumes come up the back of your throat and linger gently before dissipating

In summary, I think this is a very workmanlike entry to the genre. I’d drink it neat, yes; but it makes a phenomenally different and pleasurable mixer too, largely due to its unusual herbal properties which give even that old faithful, the rum and coke, a uniquely different perspective. Remember how I despised the plasticine taste of the Stroh 54? This delectable local tipple from middle Europe avoids the pitfalls of that overproof, and is a decent rum, an interesting sipping tipple and something that I’d recommend for any who want to try something a little off the reservation.