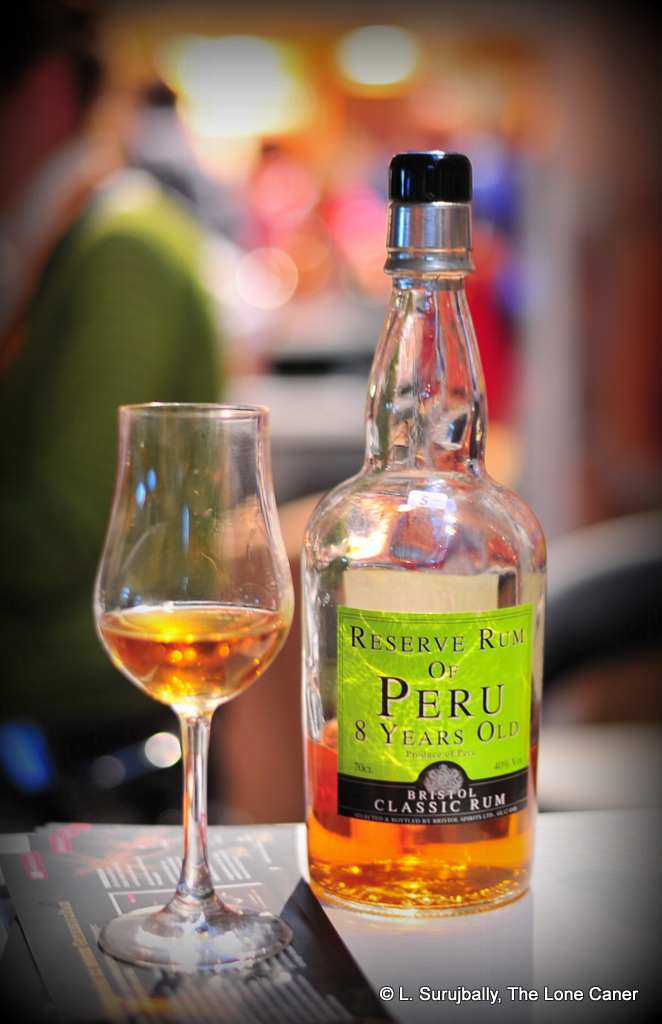 Into the shadowed world of dronish and often-boring label design, the screaming green of the Peruano stands out like a neon tarantula on a wedding cake. It’s an assault on the visual cortex that can’t help but make you catch your breath, mutter an amused “wtf?” and move in for a closer look. Not that this has anything to do with the quality of the rum inside, of course. I merely bring up the point to remark on the fact that originality in any form is a vanishing breed in the rum world and we should be grateful for such small winks from the craft makers even if it’s only a marketing plug.

Bristol Spirits is an independent bottler out of the UK which started life in 1993, and is therefore something of a recent entrant to the field (Cadenhead, by contrast, has been around for over a hundred and fifty years). Their barrel selection from the various countries around the Caribbean has created an enviable track record of limited bottlings; I’ll always have good memories of the Port Mourant 1980, and the 1970s era editions remain on my must-have list. They don’t seem to hew to any particular ageing philosophy – some of their older bottlings were aged in the UK, while others, like this one, were kept in situ.

Nosing the blonde spirit gave some clues as to why the decision may have been made in this instance: it was soft, clean…almost delicate. No pot still could have created something this light and unaggressive (my opinion). Initial smooth scents of hay and vegetal flavours gave way to more luscious soft fruit – peaches, ripe dark cherries, even a touch of mocha, but all very restrained, even shy. It was a rum that if you really wanted to dissect it, you really had to put some effort in.

As I poured it out and sampled it for the first time, I wondered what Bristol was trying to do here – make a competitor to Rum Nation’s Millonario 15, maybe? It shared many of the characteristics of that product: light to medium body, slightly sweet, immediately redolent of white guavas, flowers and a smooth cream cheese. But then it went its own way, and I noted a slight sharp whiff of bitterness emerging, bright and clear like the inlay on a ginsu knife. It was at odds with the easy-going nature of what had come before, while not entirely detracting from it – it provided, in fact, a kind of pleasing counterpoint, because the balance of the competing elements was pretty good. Adding water opened up more fruits, vanilla, some oak influence and a whiff of dry tobacco. For a standard strength rum it also exited well, though this was short, shy, bright, a little sharp, as if a can of peaches in syrup had been sprinkled with some cinnamon and lemon juice. 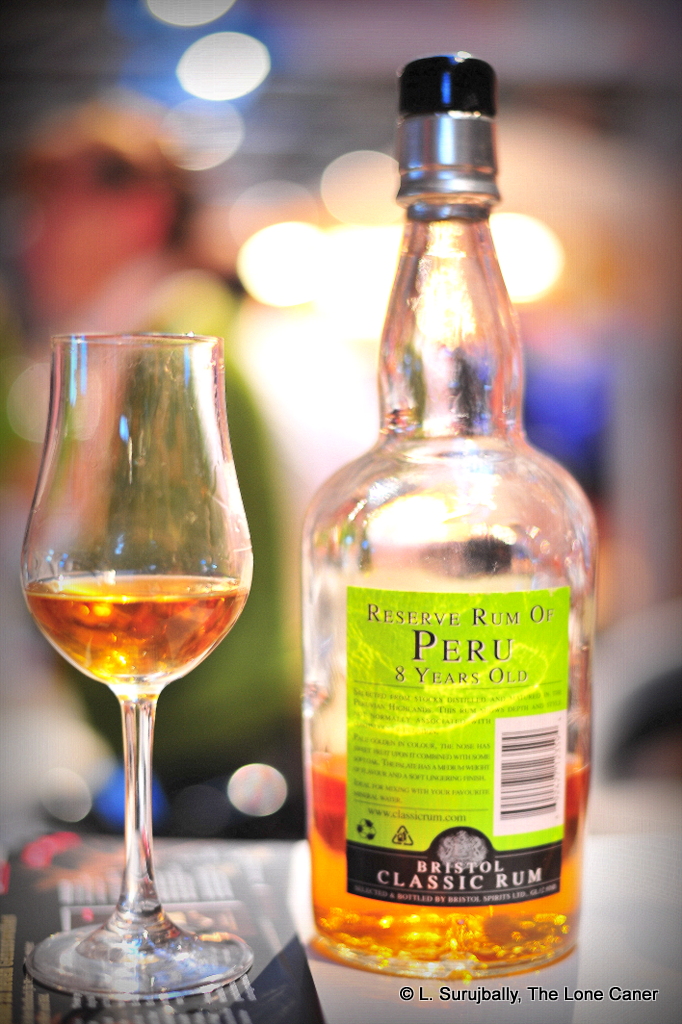 Independent bottlers tend to be more associated with cask strength behemoths than such laid-back fare, so I was not entirely sure what Bristol’s intentions were, with this Peruvian eight year old. Their recent foray into spiced rum territory makes me worry that perhaps they are abandoning their craft-bottler, limited-edition ethic that produced such incandescent gems as the PM 1980, and now they are swinging for easier sales by diluting down to 40% (they didn’t specifically address that point in they communique to me, and I had not asked). On the other hand, the rum is gentle, even elegant (I had similar feelings about the Juan Santos 21 year old), and so perhaps this was something that had to be done lest additional proofage obliterate the subtler harmonies of what I detected.

Be that as it may, for anyone who likes standard strength rums without too much intensity or in-yer-face attitude, this is a good one. I’d be surprised if more editions from Peru don’t follow this one out the door, in the years to come. Because even with its limited outturn, I think a lot of people will enjoy it, and it leaves us all with another colourful tile in the worldwide mosaic of rum…if the label didn’t already provide that, of course.