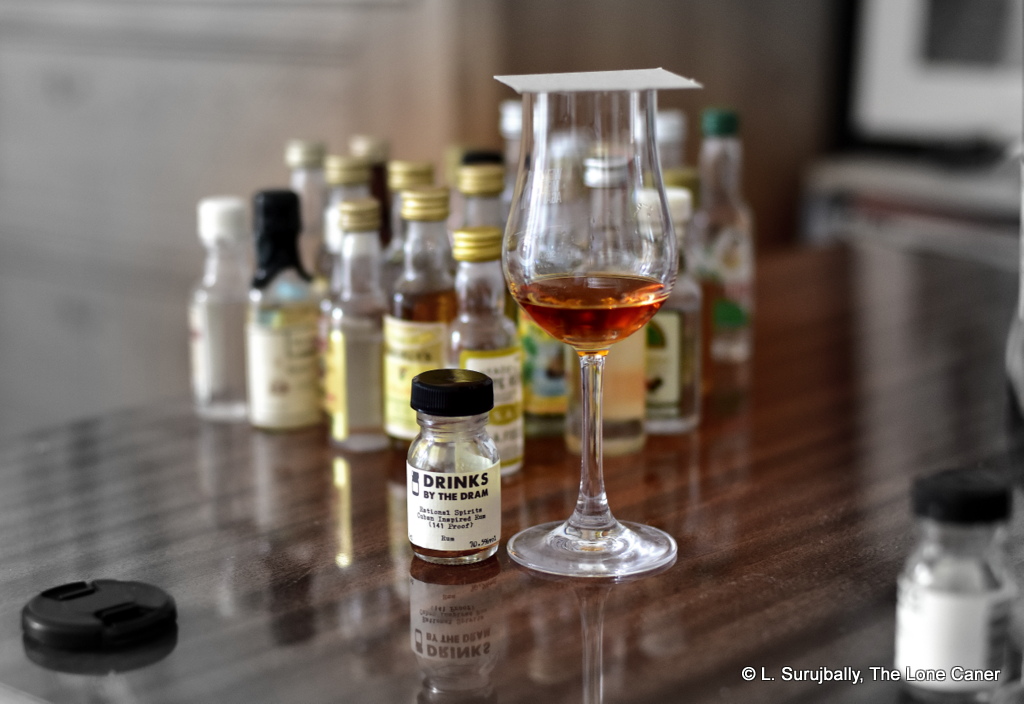 Remember Lost Spirits? No? This was the company that made rumbles a few years ago, by using a proprietary “flash ageing” process developed by its founder, Bryan Davis, to promote “super fast ageing”. In theory, the chemical reactor Davis built would create a spirit that would taste like a twenty year old mature product, when in fact only a week old. Most sniffed condescendingly, made remarks about charlatans and snake oil sellers, sneered about how it had been tried and failed many times throughout history (usually to con the unwary and fleece the innocent) and walked away…but I was intrigued enough to buy their three initial attempts. Those were not all that hot, although I heard subsequent editions with tweaked settings produced better results. But the hoopla faded and I heard little more about it and I was not interested enough to follow it up (an article was posted in the NYT in February 11th this year that spoke about the efforts of several companies to currently pursue this Holy Grail.)

That didn’t stop Lost Spirits from hitting the bricks to try and jack up some interest via licensing, and Rational Spirits out of South Carolina teamed up with Mr. Davis, who has continuing to tinker with the technology. In 2017 they released a Cuban Inspired rum, the second generation after Lost Spirits’ own, at a breathtaking 70.5% ABV – its stated purpose was to replicate pre-Revolutionary pot still Cuban rum profiles, and use that as a springboard to do similar magic with many near-dead or all-but extinct rums (like Appleton’s legendary 17 Year Old, perhaps). Weeellll…okay. Let’s see what we have here, then.

First of all, the actual origin spirit of the rum is somewhat murky. Master of Malt, Distiller.com and Andrew Abrahams all mention the pot still business, but it’s nowhere stated where that came from or who distilled it; there’s loads of this in the marketing materials which all online stores quote, and they helpfully also include Grade “A” molasses base and charred cask ageing, but hardly inspire my confidence. Since Rational is now out of business and its website leads to a gambling site, not a lot of help to be gotten there. Moreover, the “Cuban style” even in pre-1960 times was considered a light distillate made on column stills (for the most part) so there’s some issues there — would anyone even recognize what came out the other end? 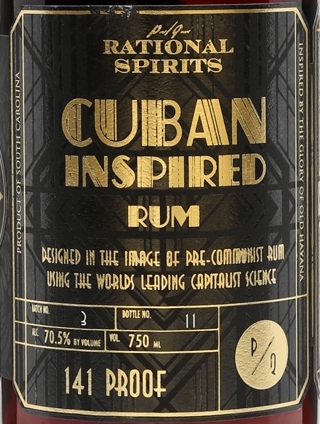 So let’s try it and see. Nose is, let me state right out, great. Sure, it’s rather rough and ready, spurring and booting around, but nicely rich and deep with initial aromas of butterscotch, caramel, brine, molasses. A nice dry and dusty old cardboard smell is exuded, and then a whiff of rotten fruits – and, as the Jamaicans have taught us, this is not necessarily a bad thing – to which is gradually added a fruity tinned cherry syrup, coconut shavings and vanilla. A few prunes and ripe peaches. Hints of glue, brine, humus and olive oil. It smells both musky and sweet, with anise popping in and out like a jack in the box. Glue, brine, humus and olive oil. So all in all, a lot going on in there, all nicely handled.

It starts, however, to falter when tasted, and that’s in spite of that very powerful proof. The caramel, chocolate, toffee, vanilla and butterscotch carries over. To that is added some aromatic tobacco, rather dry, plus polished well-cured leather. A drop or two of water releases additional notes of citrus and deeper molasses (perhaps a bit too much of the latter, methinks). Aside from faint dark dried fruit, most of what I taste is the non-sweet kind – dates, figs, olives. Very little sweet here, more of spices and leather. The finish is simple enough – it’s long though, and quite hot and spicy (“brutal” remarked Paul Senft, in his review) – mostly vanilla, a bit of fruit, caramel and molasses, plus one last filip of anise.

So, it started really well, and then just lay down, heaved a sigh, farted and then expired, but fatally, it never really enthused me. It felt more like any reasonably decent low-brow young wannabe rum — made honestly, but less like a Cuban than the bastard offspring of a rather uncouth lightly-aged Versailles hooch and a low-grade but high-proofed Hampden. The nose was fantastic, by the way, which raised hopes, but then all that goodwill drained away, because sipping and tasting invited confusion, leading to outright disappointment.

In fine, my opinion was that running it through this “flash-ageing” process neither helped nor hindered, because who could tell what the fermentation, charred barrels and the origin-still imparted, versus the tech? And the Cuban-inspired part? Not hardly. Best to ignore that aspect for now and drop the expectation down the toilet, because it’s nothing of the kind. Take your time nosing it and enjoy that part of the experience to the fullest, because after that, there’s not much of interest going on or heading your way, except a really speedy drunk.