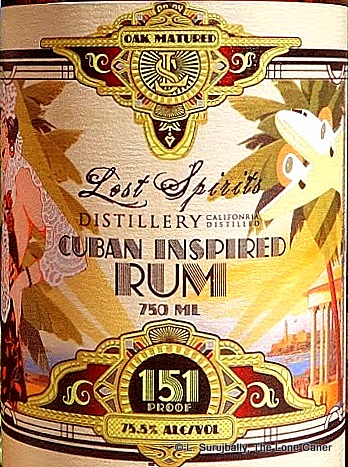 Not quite there.  Yet.

Lost Spirits, if you recall, is the company that produced a set of rums of varying strengths last year – polynesian, navy, colonial, and this one – which are processed by their proprietary “reactor” to emulate the taste profile of rums aged for many years, while only being days old.  This is one of the three I bought, the “Cuban Inspired” version, bottled at a growlingly powerful 75.5% and properly labelled “151”.  151s are generally mixers (unlike, say, the SMWS beefcakes), which strikes me as an odd choice to produce – because if one is trying to showcase the ageing potential of the reactor, why make a rum that people have never seen as an aged product? Perhaps it is to try and recreate the taste markers of the style as well – if that’s what was attempted, I stand here before you telling you that the system still needs more work.

That said, let’s just get the stats and background out of the way: the Cuban Inspired is made from baking grade molasses — much like, I guess, Pritchards’ — water and yeast, some interesting tricks with nitrogen deprivation, no additives or colouring, some ageing in charred and toasted American oak barrels, and filtration through a coconut husk filter. So as 151s go, something of a diversion.  I was therefore quite curious whether a Cuban-style profile could be made via technology instead of actually in Cuba.

The light bronze rum nosed quite kinetically, of course, which at that strength was to be expected. Sharp, hot scents of brine, figs, olive oil and tequila led things off with some of the waxy, glue and petrol notes of some serious pot still action.  I set it aside to let the spicy alcohol fumes evaporate, and when I went back to it ten minutes later, things settled down a bit and the scents were much more interesting: huge molasses and burnt sugar, cocoa and vanilla notes were the backbone, upon which rested a sharper, less intense secondary aromas of coarse dry breakfast cereal and stale orange peel that’s been sitting in the sun for too long. Interesting and quite intriguing, for sure, though there’s something lacking here, a sort of middle section to bridge the gap between the sharp higher notes and the deeper and more solid underpinnings.

Putting aside the sheer oomph of this thing – for sure, given its intensity at that strength, I sipped very carefully – I was surprised how much there was on the palate: molasses soaked brown sugar, butterscotch (way too much of these three elements), salt butter, fresh baked dark russian bread (I used to buy one daily for a year straight back in my working days in the ‘Stans).  Too hot and untamed to sip really well, it was damned rough on the tongue.  With water, matters settled down, and additional flavours of overripe plums and peaches, more tequila and olives in brine emerged, weirdly mixed with hot black tea and yes, that stale orange peel made a comeback, all finishing off with a very long exit as befits an overproof, and last hints of wood and sawdust and an old, lovingly polished leather bag. 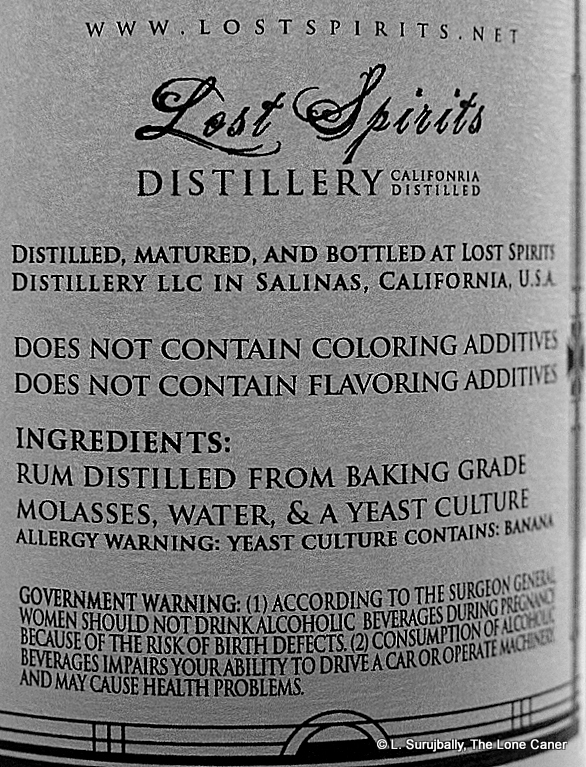 So there’s the tasting notes.  Opinion? Well, it has quite a lot of action, that’s for sure.They sort of whirl around in a melee of unfocussed aggression, like a war-movie battle scene where the director is too much in love with his shaky-cam, making nonsense of any attempt to come to grips with an underlying structure.  Tastes just exist, and they do not come together in any kind of layering or synthesis, and where each one should be informing, supporting and melding with others, here what we have is a bunch of rabid individualists who do not know the meaning of teamwork. And honestly, there’s over-dominance by molasses and vanilla and butterscotch – it’s deep and it’s nice and it’s pervasive…perhaps too much so.

Plus – where’s the Cuban by which it was supposedly inspired? I’ve had a few from the island in my time, and the Spanish style, which so many in Central and South American rum-makers have copied over the centuries, was not particularly self-evident in this rum.  Usually, rectified column still spirit further amended by careful barrel ageing is a defining marker; but I didn’t get any of that clean, dry, light, flowery profile with coy hints of molasses and citrus dancing their own little tango, bound together by easy fruitiness – quite the contrary, this was a rapier turned into a fruit-smeared butterscotch bludgeon, not all of which worked.

Whether we like it or not, when a rum is labelled as something, we expect from our past experiences of similar rums for the promise implicitly made on that promo to be honoured.  As with the Navy 68% I tried before I didn’t feel that really occurred (I sampled alongside the Navy and the Polynesian, and the Cuban resembled the former quite a bit) .  There’s little of the Santiago de Cuba or Havana Club here, to me. I’m giving it the score I do because of originality, some very interesting tastes, and then taking away some points for lack of coherence (but not for not being a Cuban – that one is an irrelevancy and I mention the matter only because the label does).  I like what Bryan Davis is doing, admire his dedication and passion and love of  technology which he is bringing to bear on a very old process, but still feel the process needs work.  From that perspective, it was real smart to call this a “Cuban Inspired” rum.

I know this review will be somewhat divisive (it’s not meant to be dismissive), so here are some references to give you more positive points of view, if you’re interested: