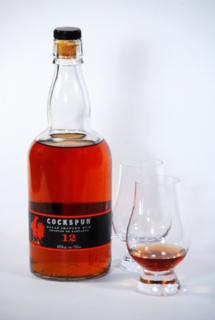 Amusingly named rum which is solid all the way through and that fails through some ineffable lack of chemistry in the final stretch, where the individually excellent elements just don’t quite come together into a perfect whole.

Okay, let’s get the funny stuff out of the way. “I like going to bed with the C—…”. “Drank some C— last night and boy, was that good.” “Really satisfying, there’s nothing like a good C–…” “As a hangover cure, nothing beats a solid red C— in the morning.” And so on. I can just see the boys of Liquorature taking one look at this review, grinning appreciatively and starting with the Mandingo jokes. Such is one’s lot in life when one brings out as evocatively-named rum as this one. And let me tell you, there isn’t a Caribbean soul alive who hasn’t at some point made a reference to this provocatively named rum with a snicker and a wink. All I can say is that I’m glad it isn’t called “lash” or “beef” or some other such innocuous sounding but meaning-laden title which only a West Indian would understand.

Cockspur came late to the party of rums in Barbados (1884) compared to the Great Grandpappy of them all, Mount Gay (oh God, more porn references). Unlike that distillery, Cockspur has stayed with a tried and true traditional bottle and not gone into the designer shape Mount Gay has recently been favouring, but that’s a matter for purists, upon which I pass no judgement (except to sniff disdainfully at the increase in price that went along with it). The producer of this rum is Hanshell Innis, a ship’s chandlery formed in 1884 by a Dane, Valdemar Hanschell. Branching out from ship’s stores to rums and other merchandise, it merged with the firm of James Innis in the 1960s, and in 1973, J.N. Goddard & Sons gained a majority stockholding in the smaller company. Since then the amalgamated company has become one of the biggest enterprises on Little England, and under the Cockspur Brand produces Old Gold, VSOR, Cockspur White and 151 proof.

Giggling rights aside, a 12 year old is never anything to be taken lightly, not least because faster maturation in the tropics usually means it’s the equivalent of a 20 year old or greater from northern climes. I liked the look of the Cockspur 12 right off the bat. Inside the bottle was a copper red rum: it didn’t exactly call my name, but certainly had a most inviting appearance. Poured into a glass it showed an oily film around the sides, and thin but slow legs which suggested an oiliness portending well for its depth.

On the nose, Cockspur had the good fortune to be part of a short tasting I did with the Whaler’s Rare Reserve. Now that rum had a nose that didn’t just tap your hooter for some attention, but knocked you out on your ass with a butterscotch fist: the Cockspur was quite a bit less aggressive, and exhibited a surer, a more solid, a more complex nose that hinted at the faintest bit of spices. Caramel, yes, but also toffee, burnt brown sugar, molasses. And after I set it down a it and it opened, like a shy lover disrobing (ok fella, yeah, you there in the peanut gallery, I heard you snicker), there came the nutmeg and cinnamon and a faint hint of (and I blush to say it) white roses.

The body and taste aren’t quite up to that standard, I’m afraid. The feeling on the palate lacks that richness of flavour that real viscosity might impart. The taste of oak comes too much to the fore, and while it’s not bad enough to detract from the balance of spices – mostly the burnt sugar and nutmeg – which follow on careful sipping, it is noticeable, and readers should be aware of that: it doesn’t seem that much effort was placed into attempting to smoothen it out. I also, after going back to my glass a few times, sensed the presence of old cigar tobacco, fragrant and faint, like a good humidor when you just open it in a darkened study surrounded by shelves of leather bound books.

I hesitate to pronounce a definitive statement on the finish which is decently long and even a shade toffee-like. What it gives you, however, is biting without being sharp, but not so mellow as to be characterized as a low-level warm burn, which to me is the mark of a skilled blender and a top tier product.

I think there is just a bit too much oak left in the Cockspur to merit a really positive conclusion to what is otherwise a solid mid-range rum. At no point is it bad, and in fact I enjoyed it a lot more than its better known cousins like the Mount Gay XO (yeah yeah, this is heresy to many, sorry guys) – it just doesn’t gel properly, marry all its elements into a cohesive, proper whole. And that’s a shame, because I do like it, and will probably return to the bottle for a second opinion sometime soon.