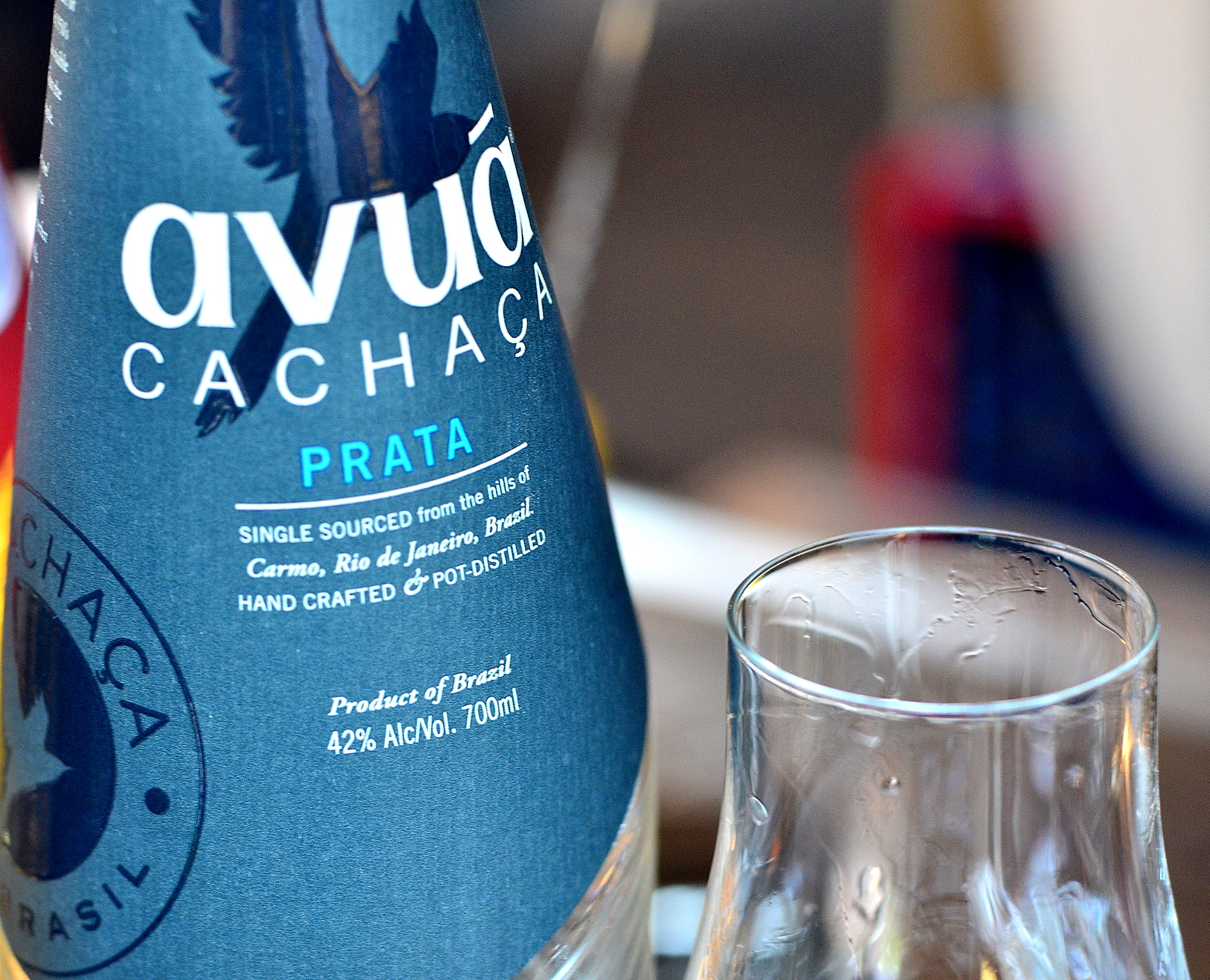 The Avuá brand of cachaça has a slightly different pedigree from independents in Europe who buy from brokers, and is closer to that of small new rum companies who buy selected stock direct from distilleries (e.g. Whisper, Toucan, and Real McCoy, for example). Two New Yorkers – one a former brand manager for Red Bull, Pete Nevenglosky, the other a businessman and lawyer, Nate Whitehouse – developed a liking for the spirit and sensed (or thought they could exploit) a rising appreciation for craft spirits in the US – rum generally, cachaça specifically. After some searching and sampling around, they settled on Fazenda da Quinta Agronegócios, a distillery just outside Rio dating back to 1923 which produces the trio of the da Quinta cachaças — an Amburana-aged, an oak-aged and a white. Starting with the Aburana and the white, these were rebranded for sale in the US as Avuá Amburana and Avuá Prata but I have not been able to establish anything particularly original about them that would set them apart from the da Quinta line

Never mind. Quite aside from these biographical details, I’m always on the lookout for interesting white rums, and so made it a point to check out the Prata just to see how well it fared. Which was, for a 42% rested-but-not-aged pot still rum, not shabby at all, if not quite as feral or in-your-face as some of the French island blancs, or, for that matter, the clairins. In fact, nosing it, the Prata presented as a rather genteel variation of such more elemental whites – akin to Cabo Verde grogues, really – and for that reason may actually be preferred by people who are put off excessive expressions of crazy and are more middle of the road. It was redolent of sugar cane juice freshly pressed, oily, briny and with some olive action in the background, but also herbal notes of dill and a little sage, some faint rubber hints, and subtle acetone and florals rounding out the profile.

The palate was not overly aggressive – at that strength it would have been surprising if it had been – and while quite dry, it reminded me somewhat of the unaged column still clairins, just gentler. It was warm, sweet, and almost delicate, and also contained some of Neisson’s tequila and briny notes. Sugar water (and that’s white sugar, by the way), more dill, sage, rosemary and a little cinnamon, but what distinguished it after a few minutes was an unique (for cachacas) taste of musty earth and wet tropical vegetation that bordered on the funkiness of a Jamaican without ever actually being so. The mouthfeel was rather light, warm and relatively smooth, so certainly the initial cuts and the resting period had their impact. As for the finish, nothing original there – just warm, aromatic sweet spices, and a vague mustiness that was far from unpleasant and made the rum stand out in its own way.

As a white rum the Prata cachaça carves out some interesting territory for itself: it’s not so crude and jagged as to be off-putting to the greater public; its tastes are pleasant, yet distinct enough not to be confused with other whites; and overall, one weakness (much like the Toucan No. 4) is that for the complexity that it does exhibit, it could easily be stronger and lose no adherents. One is left with rather more titillating sensations and vague sensory memories than an explicit and clear-cut profile, and it showcases emergent potential rather than a solid current achievement. It’s interesting to note that the company is now also producing a Still Strength version (45%) to maybe address precisely this issue, and if they are doing that, we should be keeping an eye out for what else they’re doing in the next few years. Because if they ever have the bolas to issue this white rum’s same profile at 50% or greater, I’d probably grin, take a deep breath, and dive right in.

Take for example the Cachaça Avuá Amburana, made by Fazenda da Quinta, a small 3rd generation outfit founded in 1923, located just outside Rio de Janeiro. Their cachaça is made from two types of sugar cane, has a 24 hours fermentation period, and is pot still distilled. As the name implies, it is aged in barrels made of amburana wood (which supposedly imparts an intense colour and flavours of sweetish vanilla) for up to two years and is bottled at 40%.

Does the amburana make for a uniquely different taste profile? Yes and no. It certainly presented aspects that were similar to young agricoles – fresh and crisp aromas of watery pears, sugar cane sap, swank and watermelon just to start with, clear without real sharpness. It’s after opening up for a few minutes that it shows its antecedents more clearly, because other smells, somewhat more unusual, begin to emerge – cinnamon, nutmeg, bitter chocolate, sawn lumber, wet sawdust, freshly baked dark bread. Not your standard fare by any means.

The palate was quite firm for a 40% rum, stopping just short of sharp and marrying complexity with a variety of flavours in decent balance with each other. It had both red wine and muskier whisky notes, and bags of the aforementioned spices – cinnamon and nutmeg. Vanilla, ginger, sugar water, gherkins, cucumbers, a sharp cheddar, sawdust…and also a weird line of sweet bubble gum. And, of course, some herbal grassiness – but overall the defining taste was mostly the cinnamon and swank with that slight bitter background. This continued smoothly into a longish finish that again brought out the bubble gum, some Sprite (or 7-Up, take your pick), faint citrus, more cinnamon and vanilla, and a bit of sugar cane sap. A little dry, overall, but pleasingly complex and tasty for all that. I just wish it had been bumped up in proof a few notches – at ~45% it might just be amazing.

Brazilians involved in the production of cachaças are at pains to distinguish them from agricoles, but any casual rum aficionado would have some difficulty following the logic – after all, both derive from cane juice, distilled on either pot or column stills, the cane juice has a short fermentation time and is processed soon after harvesting. Regulations are specific to each region: for example, a cachaça can only be called so if it derives from Brazil and at least 50% of the blend is aged for a minimum of one year, and for me that’s a naming and production convention and not a serious departure from agricoles (to use another example, calling only a rum made in Guyana a “Demerara” does not make it any less of a rum). Also, as briefly noted above and more applicable to Brazil, a cachaça can (but does not have to) be aged in local woods like jequabita, amburana, carvalho etc, and not the more “traditional” oak barrels like ex-bourbon, ex-cognac, limousin oak, and so on – however, since the type of wood of the ageing barrel is not a disqualifier for any rum or ron or rhum anywhere in the world (except perhaps Cuba), this again seems more a local peculiarity, not a fundamental difference between the two types of rum.

So in other words, given the cane juice origin, then either cachaça is a Brazilian agricole, or agricoles are French cachaças. To me such distinctions are geographical, not fundamental. Irrespective of the pride that the producing countries bring to their indigenous rums, production philosophies and heritage, both have interesting products that are cool to drink and make killer cocktails. That the French island rhums currently get more good press than cachaças do is no reason to ignore the latter – taken with their uniqueness and taste and wide applicabilty, something like the Avuá Amburana is good to experience if you want to go a little off the beaten track without heading into the jungle altogether. It’s a pretty nifty cachaça that’s well worth checking out.