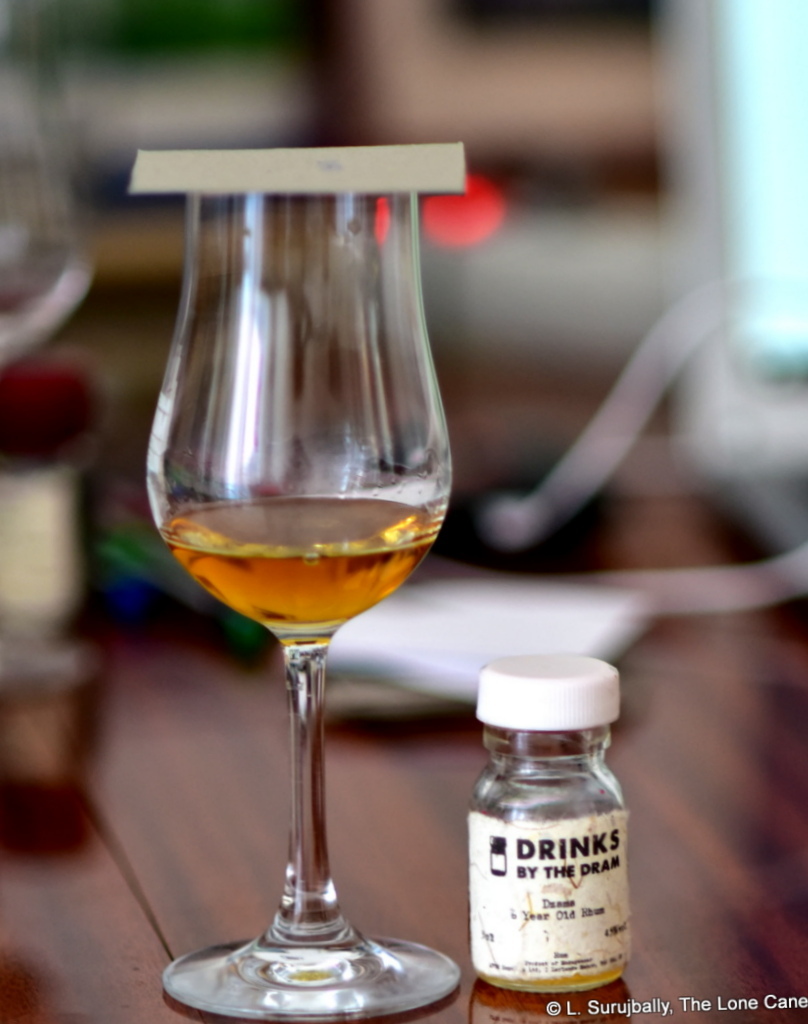 The Dzama 6 year old rum from the island of Madagascar sits between the modest 3 and 5 year old rums, rubs shoulders with an 8 YO, and looks up to the more exclusive 10 YO and 15 YO expressions; the company has been busy expanding the range since I first tried their 3 year old back in 2014. Unsurprisingly, the local market share of the company’s spirits is a massive 60% or so – they make a bit of everything alcoholic and are a very diversified drinks conglomerate – their prime market remains Madagascar itself with exports to Europe, some states of the USA and Canada. That said, it has never quite caught on with the rum drinking crowd the way the rhums of the French Caribbean islands, or Mauritius or Reunion have.

That might result from the appearance of vanilla and other spices in the flavour profile, though the makers deny any additives on any but the clearly marked spiced variations of the line (like the Vanilla). Company founding legends state that the original genesis of the cane was in the small northwestern island of Nosy-be where supposedly the oils and perfumes of the various botanicals to be found there (vanilla, cloves, pepper are often cited) leach from their roots into the soil and are intermixed with the cane plants’ own root systems, into their stems, and thence to the ultimate distillate. I’m no chemist or botanist, but one could just as easily wonder why similar processes aren’t observed on the spice island (Grenada) for example.

That spiced profile was evident on the 3 year old and I marked it down for that (as did the Fat Rum Pirate when he looked at it some time later), thinking it too dominant. It’s much less evident here, and in fact, this was almost a completely different rum. It smelled of rubber, varnish and acetones, and was quite light at 45% ABV. It had aromas of rotten bananas, fleshy fruits, and going-off apricots, mangoes and pears. That admittedly sounds rather off-putting (I assure you it really isn’t), and what quite a few people hate about such rums, we reviewers like to call it “pleasant” and “character-filled.” In fairness, I remember thinking it reminded me of a low rent Jamaican, but lacking their complete unconcern for the funk you were getting – it was, perhaps, more well-behaved.

The palate was thick, rich and sweet, even in comparison the the 3YO which showed no modesty with such aspects itself but while stronger, had also been paradoxically easier. Here we were regaled with bananas, cherries in syrup, brown sugar, and a sort of smorgasbord of fruitiness – some tart, some just soft and mushy – and creaminess of greek yogurt sprinkled with cinnamon and cloves. Disappointingly, the finish did nothing much except lock the door and walk off, throwing a few notes of cloves, sugar, cherries, peaches and syrup behind. Not a stellar finish after the intriguing beginning.

Whether Lucien Fohine — who founded the Vidzar, the owning company in 1980 — was right about the way local plants’ aromas came into the final distillate, or whether they catered to local palates by goosing the juice a tad, the fact is that the rum is a bit too sweet and a bit too overdone, like a nouveaux riche showing off new furs and new bling. It’s not precisely overkill, more like a loud drunk regaling a joint with loud and boring sports stories you’re not interested in – it’s distracting, even off-putting and makes the enjoyment less.

That said, it’s not precisely a bad rum either. It’s a bit like a Bacardi Gold mixing it up with a Diplo Res Ex, or some other such tasty workhorse that can be used for a number of different purposes, even a neat sip – the relatively low strength and the aforementioned tastes help there. But for someone who knows his rums it’s a bit of a let down, and while it’s certainly pleasant as it is — cocktail gurus and professional mixologists could probably find good things to do with it — I think I’d rather spring for the upscale aged versions that have more character and less of those distracting flavours.