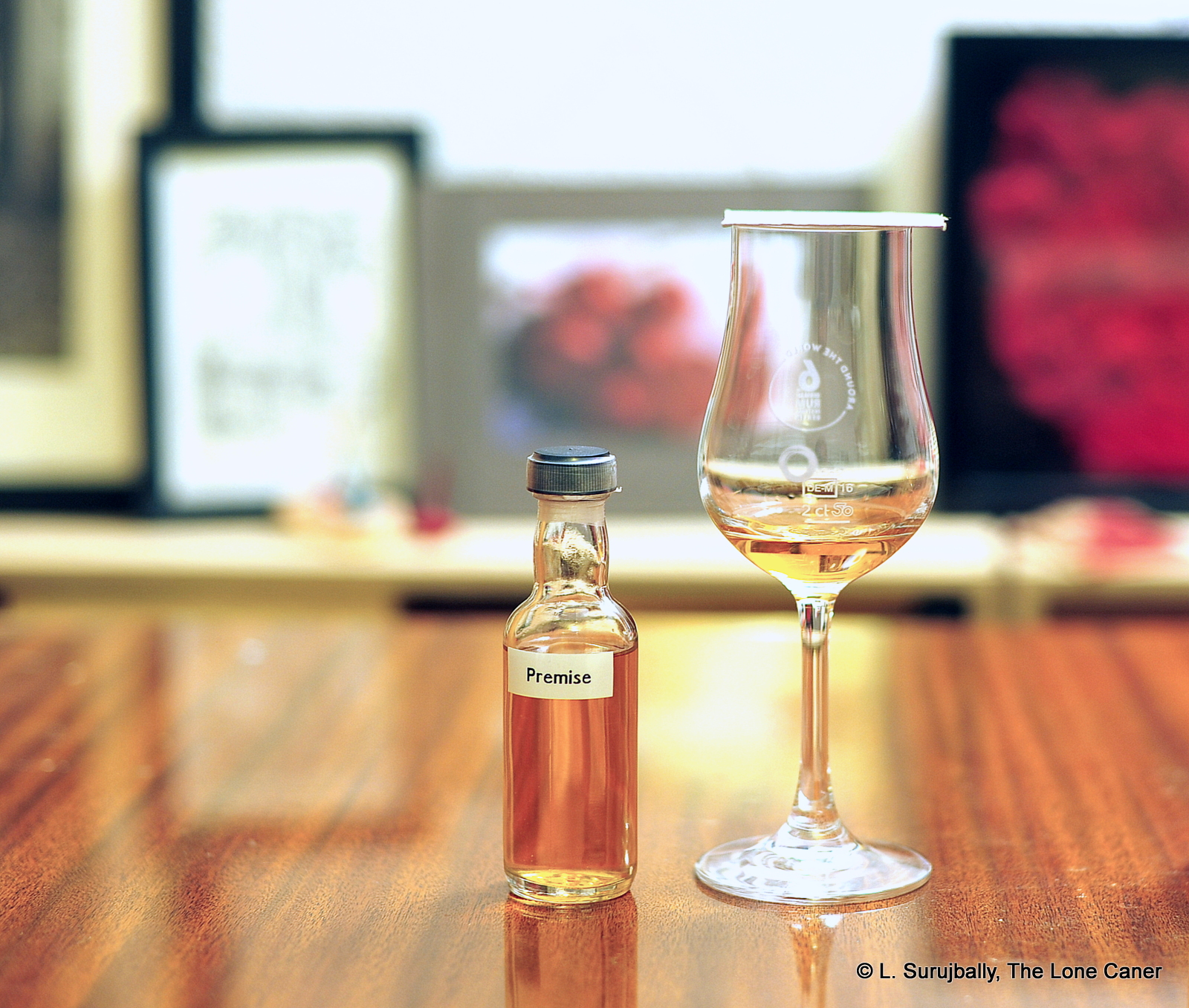 One of the downsides of working and living where I do is that the latest newest releases pass by and can’t be tried in time to catch the initial wave of advertising and consumer interest. Sometimes whole years pass by between the much ballyhooed arrival of some interesting new product and my ability to write the review…by which time not only has the interest flagged but also the supply, and a whole new raft of fresh rums are hogging the limelight. This is particularly thorny with respect to the very limited issues of independent bottlers who do single cask releases, but fortunately is not quite as bad with primary producers who keep their flagships stable for long periods of time.

A well-known company which falls in the middle of the divide between extremely small batches of single barrel rums (of the indies) and much more plentiful globally-available supplies (of the major producers) is Foursquare, specifically their Exceptional Casks Series. These are regular releases of many thousands of bottles…though they are finite, even if some are more plentiful than others. Fortunately they are widely dispersed geographically which is why one does see a small but steady trickle of posts on social media about somebody picking up this or that bottle at what remains a reasonable price for the age and supply.

One of these is the “Premise” which was released along side the “Dominus” and the “2005” in 2018 and had a substantial 30,000-bottle outturn 1 – it was ECS Mark VIII, one of the “red line label” low-alcohol sub-series of the line which include the Port Cask, Zinfadel, Detente, Sagacity, Indelible, etc. I touched on it briefly as one of the eight bottlings which made me see the series as a Key Rum of the World, an opinion which has only solidified over the years. Recently I was able to try it again, and it’s interesting how the summary notes made three and a half years ago remain relevant…there really isn’t much I would change, except perhaps to fill in and expand the details. 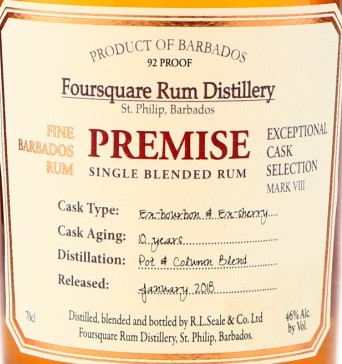 It’s a pot/column still aged blend, made up of three years’ ageing in ex-Bourbon casks and seven in sherry casks, released at 46%, and let me tell you, this is one case where the lower strength really is an advantage, because there is a bright sprightliness of a warm spring morning about the nose, redolent of flowers and a basket of freshly picked fruit. There’s the spiciness of cumin, vanilla and masala, mixed up with apricot and green apples (which somehow works real well) plus grapes, olives and a nice brie. A bit salty, a bit tannic, with a touch of the sour bite of gooseberries.

Tastewise, the low ABV remains solid and presents as quite warm and spicy, with a clear fruity backbone upon which are hung a smorgasbord of cooking spices like rosemary, dill and cumin. Also brine, some strong green tea, to which are added some faintly lemony and red wine notes from the sherry, merging well into vanilla, caramel and white nutty chocolate and then smoothly leading into a delicately dry finish, with closing notes of toffee, vanilla, apricots and spices.

“Straight sipper?” asked Ralfy (probably rhetorically). “Absolutely!” And I agree. It’s a great little warm-weather sundowner, and if it treads ground with which we have become familiar, well, remember what it was like four years ago when blended rums this good from major houses in limited release were the exception, not the rule. If I had to chose, I would rate it ahead of the Zin and the Port Cask, but not as exciting and fresh as the superlative Criterion 2(which admittedly, had more sock in its jock, but still…). However, this is semantics: I enjoyed it, and moreover, everyone has their own favourites from the lineup, so mine will be different from yours

Now, it’s long been bruited around that Foursquare, more and better than most, makes rums that particularly appeal whiskey anoraks – the dry, woodsy, fruity core profile makes it a good rum to entice such drinkers (particularly those into Bourbon) away from the Dark Side…and given the popularity of their rums in the US, surely there’s some truth to that. The overused term “gateway rum” is one I don’t like much, but here is a rum that actually does deserve the title. Like others in the red line ECS series, the “Premise” has a very large outturn that allows most who want it to get it; that combines an approachable strength (for the cautious) with an accessible price (for the impecunious); for newcomers it’s soft enough not to intimidate and for aficionados it’s complex enough to appreciate. There’s something for everyone here, all in a single bottle and believe me, that is no small feat for any one rum to achieve.

A “premise” as a noun, is A statement or proposition from which another is inferred or follows as a conclusion, or as a verb, means to base an argument, theory, or undertaking on. The evocative name of the rum was not chosen by accident: back in 2017 when the rum was being finalized, Richard Seale was making a specific point, that a rum could be additive free and unmessed-with and still be a good rum. This was the place he started from, the basis of his work, and although even as late as 2018 it was mostly the UK bloggers who were singing the company’s praises, the conclusion that the Mark VIII left behind was surely a ringing endorsement of the core premise: that confected rums need not be held up as ideals to emulate or be seen as ends in themselves, when so much quality could be achieved by adding nothing at all. 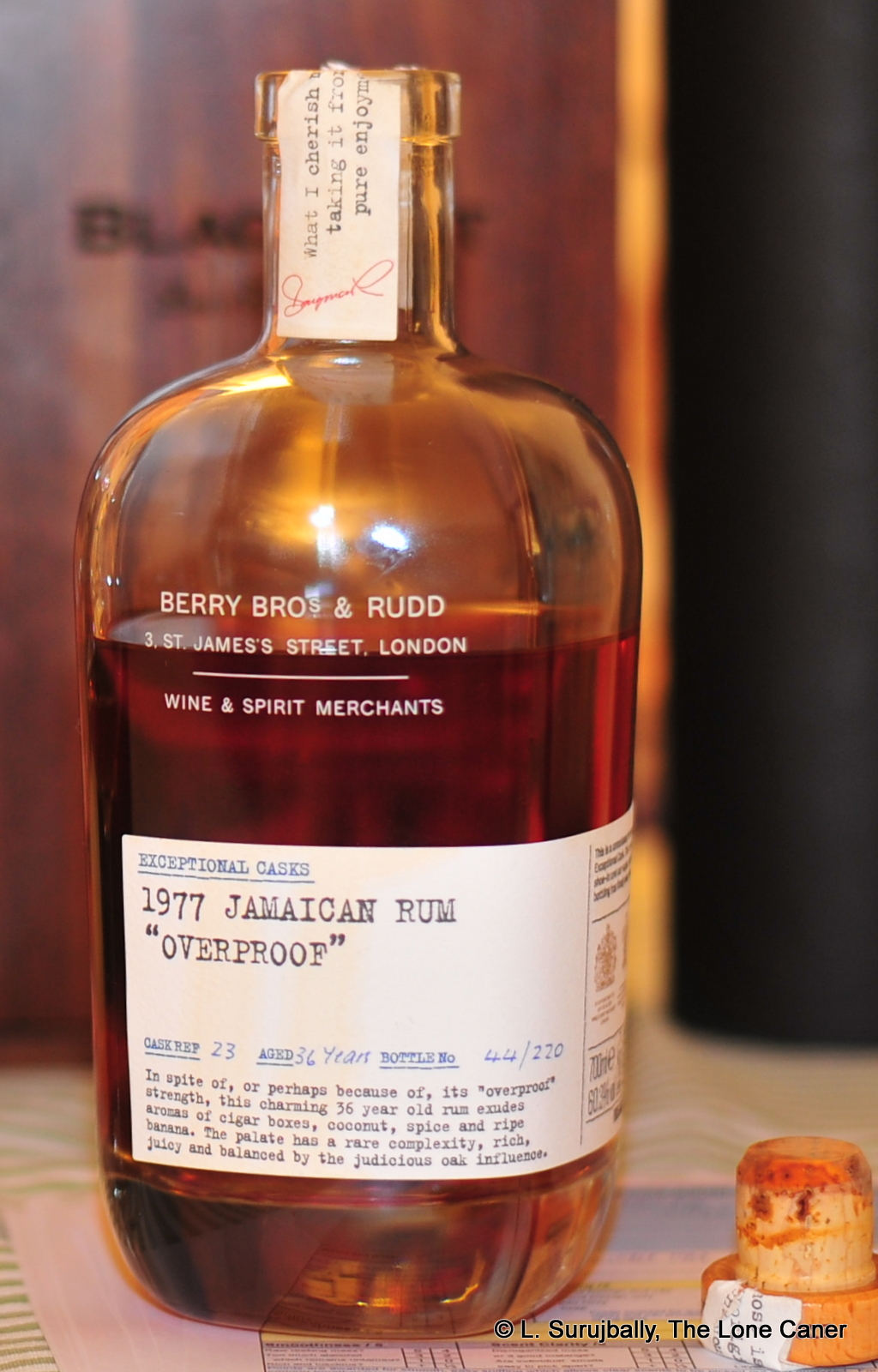 Even now, years after I acquired one of the 220 bottles of this phenomenal 36 year old rum, it retains its power to amaze and, yes, even awe. It still retails in the UK for over six hundred quid, reviews are rare as sugar in a Velier rum, and to this day it is unclear whether it is a blend — or if not, from which estate or distillery it hails.  Whatever the case, it is a great bit of Jamaican rum history and should be tried by any who get the opportunity.

Nose – Pungent, bags of fruits resting on a firm and almost sharp initial aromas.  Vanilla, coconut, aromatic tobacco, and – at least at the beginning – very little in the way of true ‘Jamaican-ness’.  Where’s the funk?  Oak is well handled for something this old – so likely it was aged in the UK.  After some minutes coffee, raisins, bitter chocolate, parsley (!!) bananas, cherries, and faint dunder starts to creep out, before developing into something much more aggressive.  Definitely a rum that gives more the longer it stays open so don’t rush into this one.  There’s also a musty, damp-cellar background to it all that combines well with the wood, and somewhat displaces the fruitiness the esters are trying to provide.

Palate – Whew, hot hot hot.  Started slow, worked up a head of steam and then just barreled down the straight looking neither left nor right. Dusty cardboard and cereals, more of that earthy mustiness, plus some brine, avocados, cumin and maybe ginger.  Adding water is the key here, and once this is done, ther is caramel and cinnamon, more cumin, hay, tobacco and chocolate, veggies, and yes, rotting bananas and fleshy fruit gone off – so apparently it may not start out Jamaican, but sure finishes like one.

Finish – Long and warm and very very aromatic.  Wood shavings, some more citrus (lemons, not oranges), ginger, cumin, those ‘off’ fruits and even (what was this?) some cigarette tar.

Thoughts – Still an excellent, amazing rum.  Honestly, I’m helpless to justify 60.3% and 36 years old and near to a four figure price tag.  How can anyone?  For the average rum drinker, you can’t.  You wouldn’t share it with your card-playing buddies, your kids had better not go near it, you wouldn’t give it away as a gift, and there are so few of these bottles around that it might even never be opened because the event to do so would never be special enough.  But all that aside, we need s**t like this.  Without such rums we would be a lesser people (and cede pride of place to the maltsters). And that’s why it’s a rum to cherish, if you can ever get it.