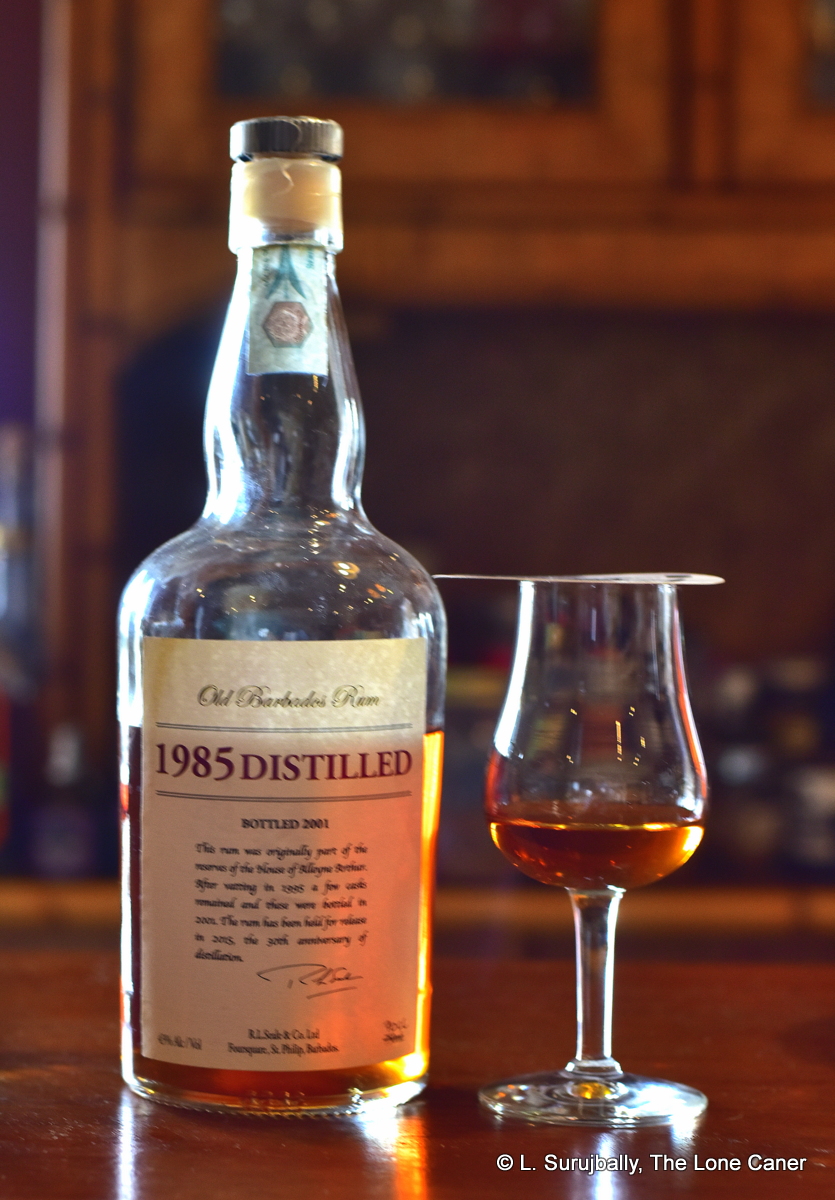 This is a rum that has become a grail for many: it just does not seem to be easily available, the price keeps going up (it’s listed around €300 in some online shops and I’ve seen it auctioned for twice that amount), and of course (drum roll, please) it’s released by Richard Seale. Put this all together and you can see why it is pursued with such slack-jawed drooling relentlessness by all those who worship at the shrine of Foursquare and know all the releases by their date of birth and first names.

But what is it? Well, to go by the label, it’s the result of a selection of some of the 1985 rum barrels belonging to the Alleyne Arthur reserves; and for the curious, Alleyne, Arthur & Hunte were also once merchant bottlers in Barbados (they made the original Old Brigand and the Special Barbados Rum); they acquired Doorly’s in the 1970s and were themselves taken over by Foursquare in 1993. Now, in 1995 the source rum – a pot and column still blend – which had been aged for ten years by that point, was vatted, and three barrels were left over from that exercise. These three barrels were aged for a further six years (Richard said that “they sat for a bit – [three barrels were] small enough to forget about”) and finally decanted in 2001, into about 400 bottles – at the time the idea was to create a premium release, but they just stood there gathering dust “for no more reason than we never came up with the premium packaging.” Finally, after seeing Velier’s releases, Richard realized that premium labelling and dressing up was not really required, that simplicity was its own cachet, and the audience preferred a simple bottle and clear explanation…and in 2015, the 16 year old rum hit the market at last.

Strictly speaking, this is a rum that could easily be mistaken for an earlier Exceptional Casks release (say, the 1998, or the 2004). The nose, warm and firm, is well tamed and really well rounded. It smells of molasses, nuts and ripe orange peel. There are also flambeed bananas, Irish coffee, apricots, some smoke and a trace of wet wood coiling around in the background, but at 43% it is well tamed and quite easy, a real sipping drink with no qualifications.

The nose is fine, but this is one of those occasions when the palate does more. It’s as dry and silky rough as a cat’s raspy tongue, not sweet, just firm, with just enough edge to make you think of a tux-sporting East-end hood. The acidic and tart notes are held way back with softer and muskier tastes up front: oatmeal chocolate-chip cookies, biscuits, cereal, and crushed walnuts. Again the sweet is kept under control, and spices like cumin and massala are hinted at, together with candied oranges, rosemary and a trace of fennel. The finish is also quite good, surprisingly durable for a rum bottled at such a tame strength, and again I am reminded of the Mark 1 or Mark II as a comparator.

So definitely a rum to try if you can get a hold of it. It opens a window on to the profile of rums made in Barbados in the 1980s before the rum renaissance, by a company no longer in existence and continued by their successors and inheritors. When we discussed it, Richard remarked that he could never quite recreate it, because he didn’t know what was in the blend – it was leftovers from the vatting, the “recipe” never written down, created by a now-retired blender. And while he undoubtedly regrets that, his eyes are set on the horizon, to all the new rums he is working on creating now and in the future, and all those who love Barbados rums will undoubtedly follow him there. But for those lucky enough to get a bottle, a sample, or a sip of the 1985, I’m sure a fond memory will be spared for this one-of-a kind bottling too. However recent, it is still a part of history trapped in a bottle, and should perhaps be tried for that reason alone, quite aside from its tasty, languid and easygoing charms.