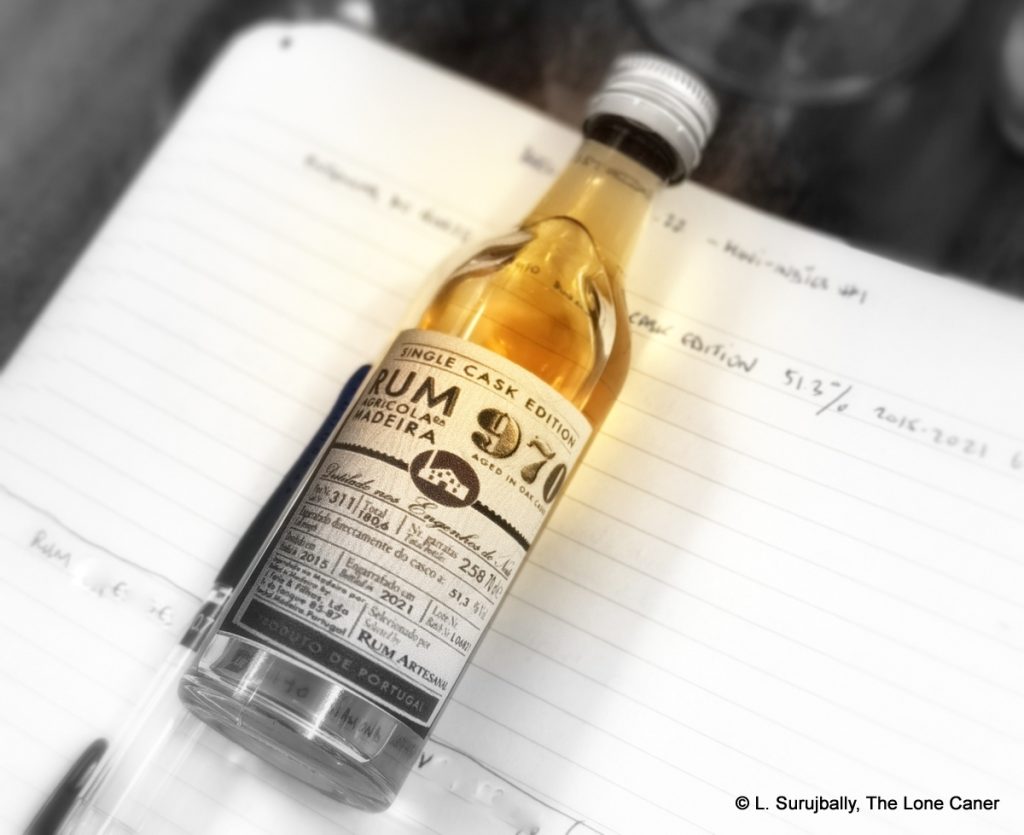 Having now looked at a few standard strength agricola rums from Madeira, it’s clear that for their own “standard line” company bottlings, many remain wedded to mass-audience standards that still appeal – for price and availability and approachability reasons, no doubt – to the general public. There’s nothing at all wrong with that, except that they don’t always provide that intensity of taste, that serious jolt of flavour, that something of a more robust strength provides.

A good example of the potential of moving beyond G-Rated crowd-pleasers is this six year old 2015-distilled Engenhos do Norte rum agricola, which was selected by and perhaps made for Rum Artesanal from Germany. Engenhos apparently does this for several indie bottlers (a search of Rum-X turns up most of them), though I’m unclear as to the exact mechanics, since it remains a “970” branded rum, with RA noted as the company that chose it. In any event, it is cane juice, column still, bottled at a solid 51.3%, and at that proof point, the comparison with the laid back and inoffensive “North” rums that we’ve looked at before (here, here and here) is really quite apparent – especially when tried side by side. 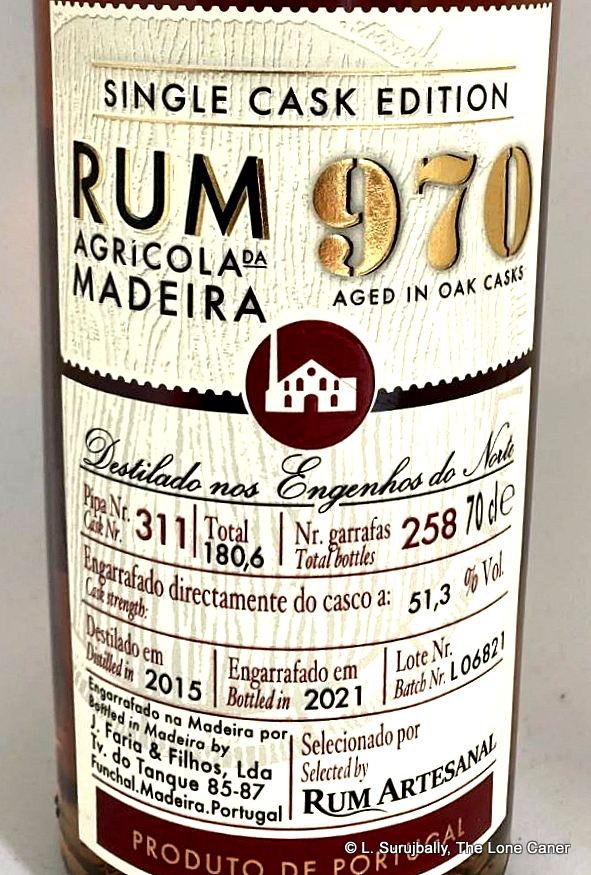 Consider first the nose: it is instantly pungent, rather thick and redolent of ripe dark fruits – prunes, plums, raisins, peaches in syrup, and has that slight tart sourness of ripe Kenyan mangoes.  It smells much firmer and more solidly constructed than Engenhos’s standard  agricolas from the North brand line. It remains, for most of the duration one smells it, somewhat thickly sweet mixed with light citrus and crisper fruit, and thankfully never cloying. Whispers of Danish pastries, caramel, vanilla, guavas and a faint touch of orange zest and a whiff of rubber round things out nicely

Tasting it is a pleasant experience, retreading the road of the nose, with a few short detours here and there. For example, although quite mouth-coating, hot and intense (at first), it’s also dry and a little tannic. Flavours of chocolate oranges and dates emerge, combining sweetness, fruitiness and nuttiness in a nice amalgam; this is set off and then overtaken by peaches, very ripe red apples, rose petals, raisins and a touch of caramel, vanilla and cinnamon, with just a tiny hint of cayenne pepper lurking behind it all. It all leads to an easy-going medium long finish combining fruits, some sugar cane juice on the edge of getting sour, and spices. It’s not sharp at all, rather lacking in body, but I submit that the strength overall is reasonably well chosen for the rum that ends up in the glass.

Compared to the others Engenhos do Norte agricolas, the nose is more intense, which is hardly a surprise, but the palate remained thin, which is. Still, I liked how it developed into a sort of spoiled fruit salad drizzled with sugar and caramel at first, then gets taken over by a slightly more traditional profile. Well constructed overall, it still lacks an individualism that I find odd – even after running several of these Madeiran rums side by side, I still can’t quite put my finger on any aspect of them that identifies the terroire specifically, which indicates more research is probably needed (by me). Too, although it is — and others are — a rum from cane juice, not all of the light green herbaceousness comes through in the sampling, and they exhibit a solidity at odds with the effervescent clarity and brightness most true agricoles display.

But all that aside, it’s a good mid-range rum, a tasty treat and it’s well selected. It shows off the potential of higher proofed rums, and marries a strong series of tastes to a deep and yet also occasionally sprightly series of lighter elements. The important thing is that it doesn’t play coy, doesn’t try to hide anything – everything you taste is on the table for you to accept, or not. On balance, I’d go with the former, because compared with the other rums from the company I’ve tried, they got a lot more right than wrong with this one. 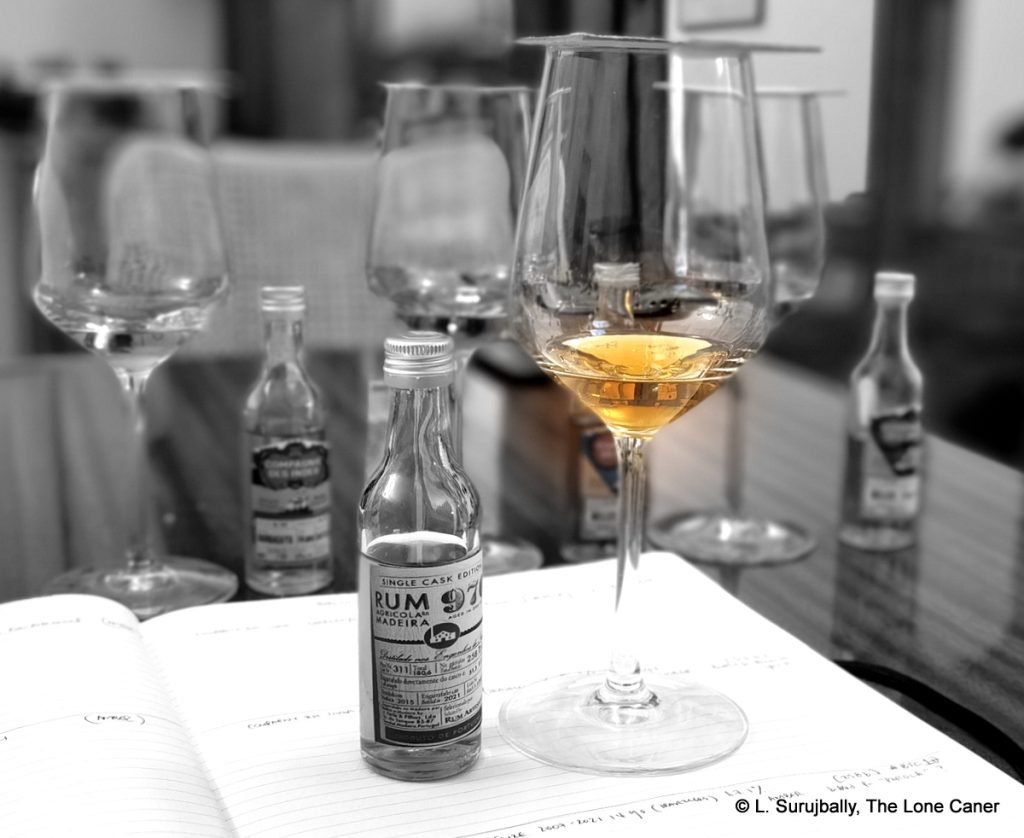