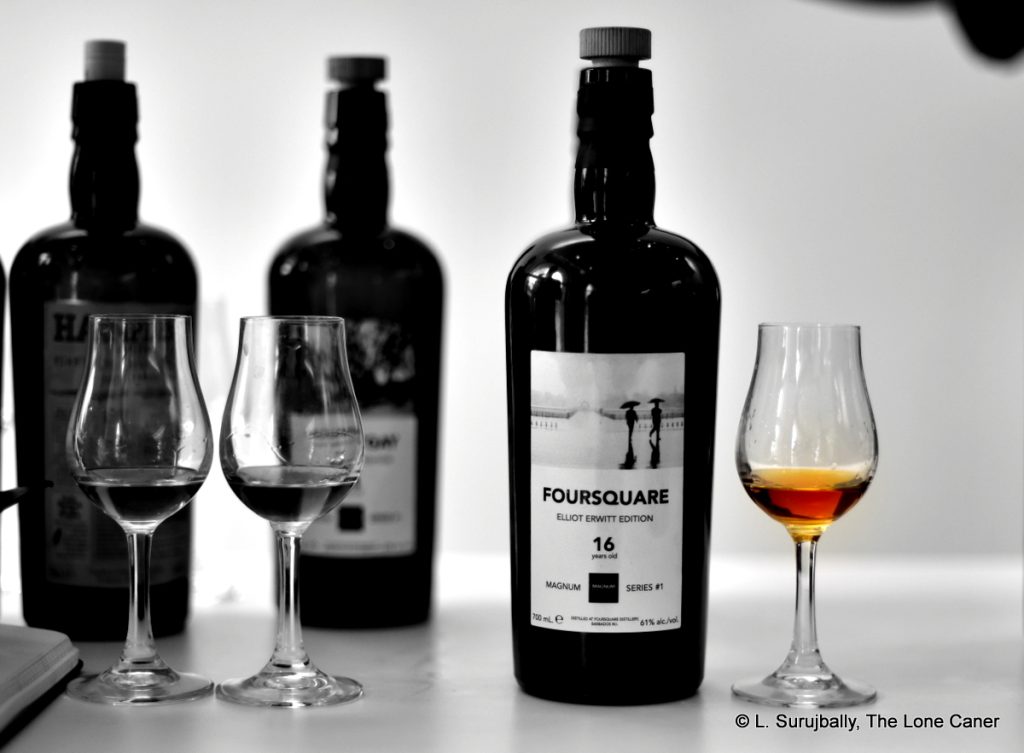 The new rums of Velier’s first edition of the Magnum Elliot Erwitt series of rums are only four in number, and it’s too early to tell whether future editions will materialise. Honestly, I don’t see any need to create a new series at all: both the Hampden and Foursquare rums already have well established collaborative series of their own, Saint James could have been folded into the 25th AOC Anniversary bottling and I’m sure a home could have been found for Mount Gay somewhere. The Magnum photographic connection — to rum, Velier or the distilleries — is tenuous at best and even the selected photographer is a relatively obscure choice.

Still, if the intent was to release four rums that stand out in an arresting and visual fashion, then that works, and surely Velier is treading on familiar ground they themselves have helped establish. And there have been one-offs and smaller series before, like the original Damoiseau 1980, or the twin Basseterre rhums, or the two Indian Ocean series releases. Nothing says it needs to be an ongoing multi-year effort like, oh, Rom Deluxe’s “Wild” series. Next year there will likely be yet another one and I do enjoy looking for and at those distinctive designs.

What thoughts like these suggest, however, is a diminishment of the importance of a rum range that retains a quality and consistency level over long periods. The Demeraras, the Caronis, the HV series of rums — even the 70th Anniversary Collection — are all examples of successful and important long term ranges Velier has created. By making a series of short-lived “little” series like Warren Khong, Indian Ocean, Japoniani, Villa Paradisetto (among others), one wonders if there really is an overarching philosophy at work, some kind of through-line that makes each range truly unique in some individual fashion, over and above the arresting designs and colours.

I make this observation because of the four rums in the first collection, the Foursquare is the one that, to me, stood out the least (I tried all four together). The production stats, on paper, are all sterling: pot-column-still blend (the website calls it a “100% pot still pure single blended rum” but that’s a contradiction in terms, and I confirmed it is indeed a blend of the sort Foursquare is known for), distilled in 2005, double aged in ex-bourbon and sherry casks for sixteen years, then released with an outturn of 1200 700ml bottles and 600 1.5L magnums at 61%. A serious, old tropically aged rum. The distillery doesn’t make much that’s older than that. 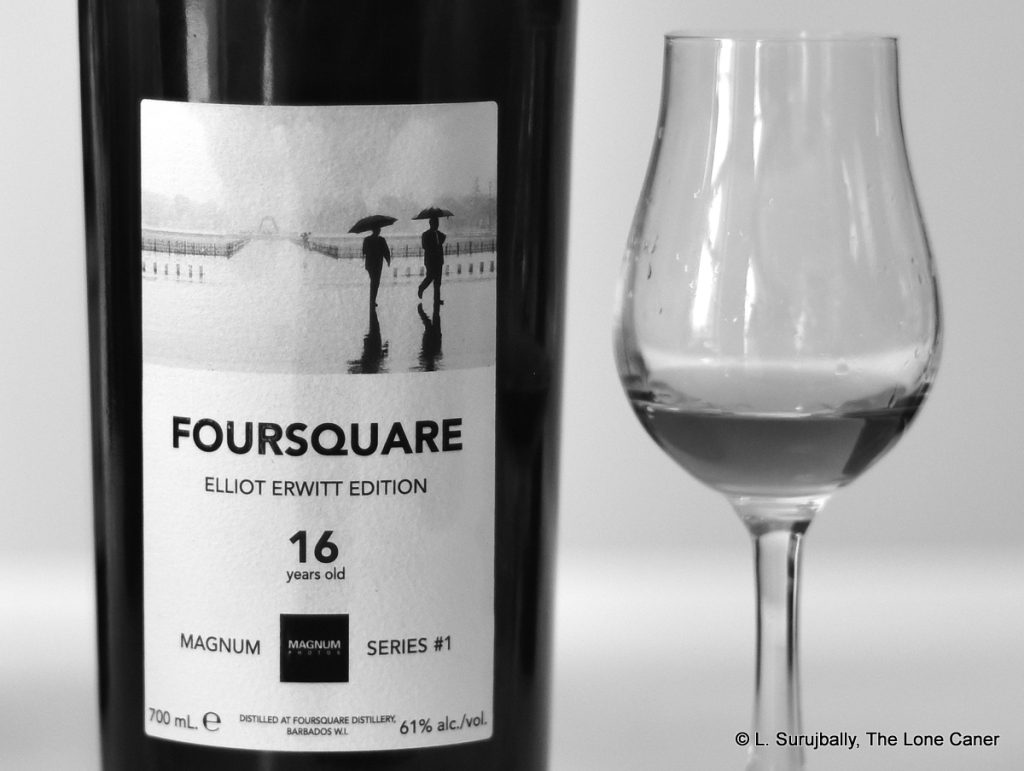 What it doesn’t do is break new ground in any significant way. The nose is light for the strength, for example, and feels consistent with my memory of other ECS releases. Dusty and somewhat papery at first, before the more usual salt-caramel, vanilla, and aromas of grapes, peaches and ripe apples emerge. There’s a creamy, briny, almost tart laban background, macaroons, some nuttiness, a touch of orange peel and cinnamon, a bit of basil and rosemary herbs. A decent nose, about what is expected.

It tastes about the same. The texture is great, very solid and emphatic, and channels fruitiness well: mostly cherries in syrup (minus the excessive sweet), ripe red grapes and apples and peaches; there’s also brown sugar, vanilla, coconut shavings, some molasses, white chocolate and nuttiness, set off with just the suggestion of citrus. The finish sums all that up, adds little additional complexity and its major claim to fame is that it it is really quite epically long, with notes of unsweetened yoghurt, caramel, vanilla and some indeterminate fruitiness.

Overall, it’s good. That said, it didn’t move me much — what’s missing is something of the exceptionalism, the blazing fire and shoot-the-moon excellence that define Velier’s best collaborations with Foursquare, and that distillery’s own finest ECS editions. This is a hyped limited release with serious artistic pretensions; the profile is consistent, the taste is good, it adheres to most of the markers that we seek in a limited edition Barbados rum…and yet it’s one that doesn’t ring my bells, doesn’t make me sit up in stunned wtf-level amazement and then head straight over to wherever is selling it so I can get me a bottle and consider myself fortunate to pay three figures for the privilege. Barbados rum lovers will not be disappointed, of course (it would have to be a real dog for that), and investors will continue to buy it because of the limited outturn, so it won’t fail in the market. For me though, it’s a pass at the price.