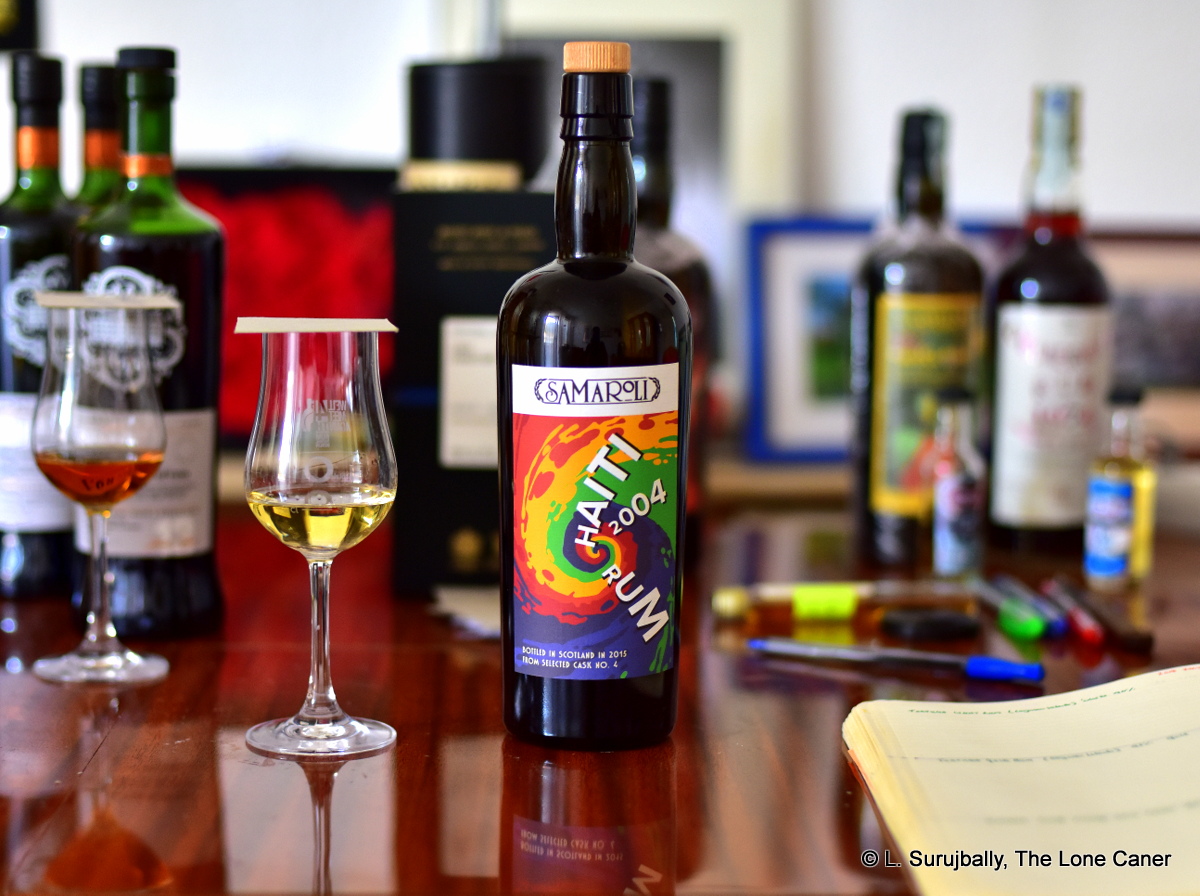 When we think of Haiti two names in rum immediately spring to mind: clairins and Barbancourt. This pair of diametrically opposite rum making styles dominate the conversation to such an extent that it is often overlooked that there are other distilleries on the island, like Barik / Moscoso, Agriterra / Himbert, Distillerie de la Rue (Nazon), Distillerie Lacrete, La Distillerie 1716, Beauvoir Leriche and Janel Mendard (among others). Granted most of these don’t do much branded work, stay within their regional market, or they sell bulk rum only (often clairins or their lookalikes that punch up lesser rums made by even cheaper brands), but they do exist and it’s a shame we don’t know more about them or their rums. 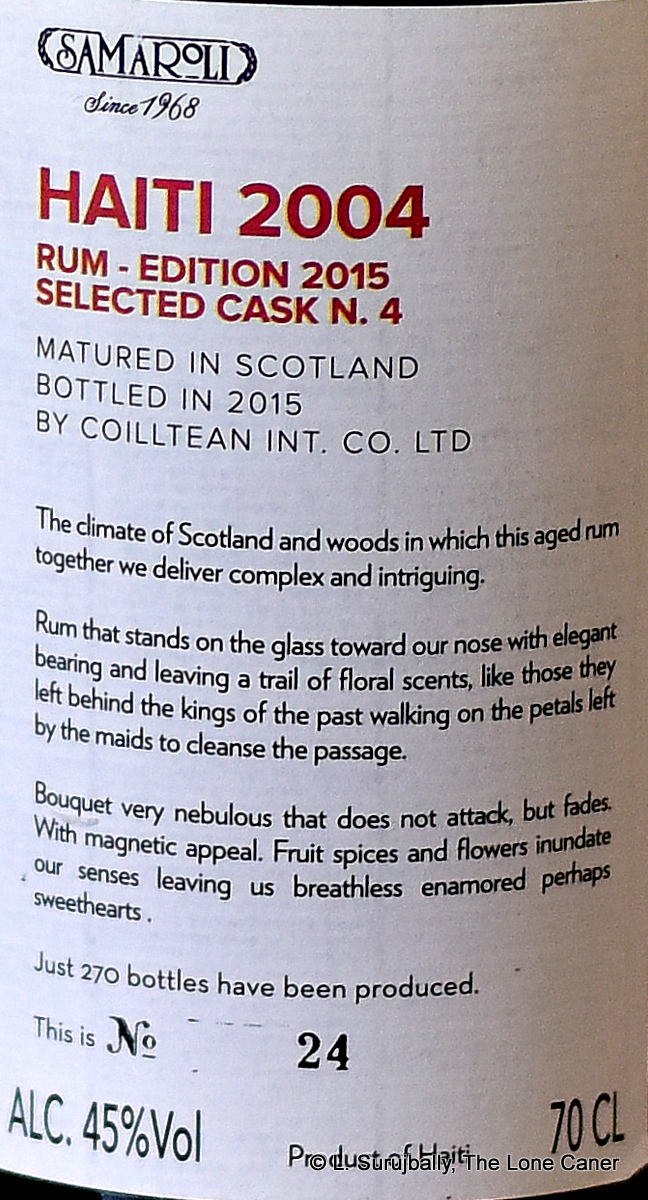 I make this point because the Samaroli 11 year old Haitian rum from 2004 which we are looking at today, doesn’t actually say which distillery in Haiti made it. Admittedly, this is a pedantic issue, since we can surmise with near-total assurance that it’s a Barbancourt distillate: they supply the majority of European brokers with bulk rum from Haiti while the others mentioned here tend to do local sales or over-the-border business in the Dominican Republic. But we don’t know for sure and all the ebay sites and auction listings for this rum and other Haitians that Samaroli bottled, do not disclose the source, so we’ll take it as an educated and probably correct guess for now.

What else? Distilled in 2004 and released in 2015 at 45% ABV, the rum hews closely to the mantra Silvio Samaroli developed all those years ago, which said that at the intersection of medium age and medium strength is a nexus of the best of all possible aromas, textures and tastes, where neither the rawness of youth or the excessive oakiness of age can spoil the bottled distillate, and the price remains reasonable. Well, maybe, though what’s going on these days price-wise might give anyone pause to wonder whether that still holds true.

The rum does nose nicely, mind you: it starts off with a loud blurt of glue paint and nail polish, warm but not sharp and settles down into an almost elegant and very precise profile. Soft notes of sugar water, pear syrup, cherries, vanilla and coconut shavings cavort around the nose, offset by a delicate lining of citrus and florals and a subtle hint of deeper fruits, and herbs. 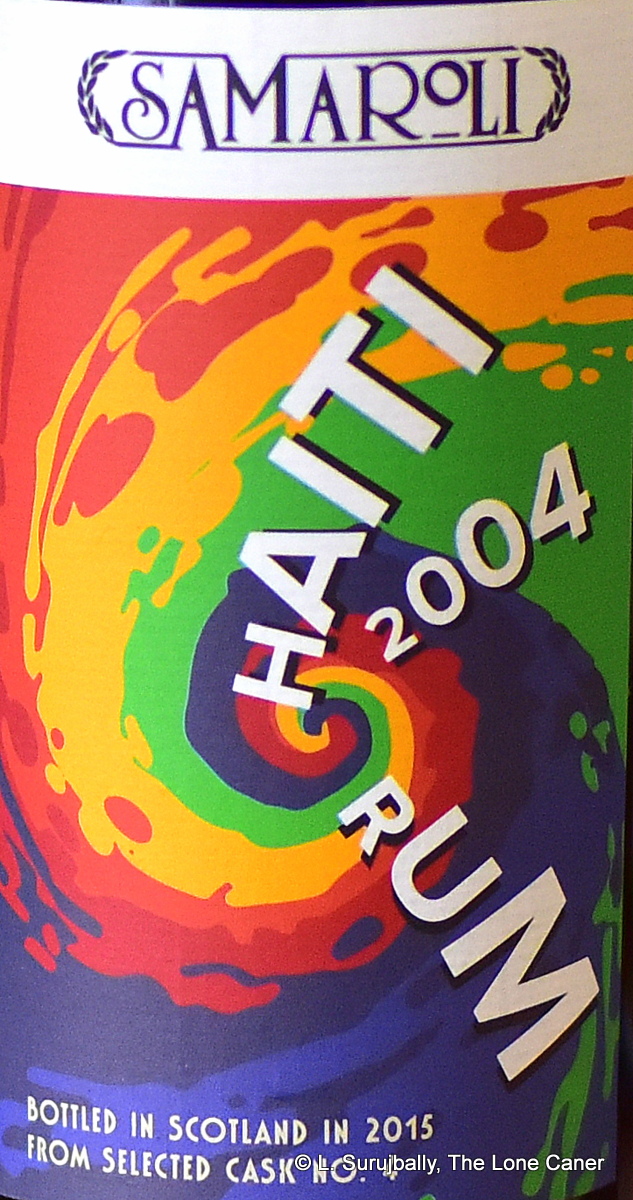 Overall the slightly briny palate is warm, but not obnoxious. Mostly, it’s relaxed and sweet, with pears, papayas, cucumbers plus maybe a single pimento for a sly kick at the back end. It’s not too complex – honestly, it’s actually rather shy, which may be another way of saying there’s not much going on here. But it still beats out a bunch of standard strength Spanish-heritage rons I had on the go that same day. What distinguishes the taste is its delicate mouthfeel, floral hints and the traces of citrus infused sugar cane sap, all quite nice. It’s all capped by a short and floral finish, delicate and spicy-sweet, which retains that slight brininess and darker fruits that are hinted at, without any effort to overwhelm.

Formed in 1968 by the eponymous Italian gentleman, the firm made its bones in the 1970s in whiskies, branched into rums, and has a unicorn rum or two in its portfolio (like that near legendary 1948 blend); it is the distinguished inspiration for, and conceptual ancestor of, many Italian indies who came after…but by 2022 and even perhaps before that, Samaroli slipped in the younger generation’s estimation, lagging behind new and hungry independents like 1423, Rom Deluxe or Nobilis. These brash insurgents issued cask strength monsters crammed with 80+ points of proof that were aged to three decades, or boosted to unheard ester levels…and the more elegant, easier, civilized rums Samaroli was once known for, no longer command the same cachet.

Now, this quiet Haiti rum is not an undiscovered steal from yesteryear, or a small masterpiece of the indie bottler’s art – I’d be lying if I said that. It’s simply a nice little better-than-entry level sipper, quiet and relaxed and with just enough purring under the hood to not make it boring. But to me it also shows that Samaroli can continue to do their continental ageing thing and come out with something that — while not a brutal slug to the nuts like a clairin, or the sweet elegance of a well-aged Barbancourt or a crank-everything-up-to-”12” rum from an aggressive new indie — still manages to present decently and show off a profile that does the half-island no dishonour. In a time of ever larger bottle-stats (and attendant prices), too often done just for shock value and headlines, perhaps it is worth taking a look at a rum like this once in a while, if only to remind ourselves that there are always alternatives.