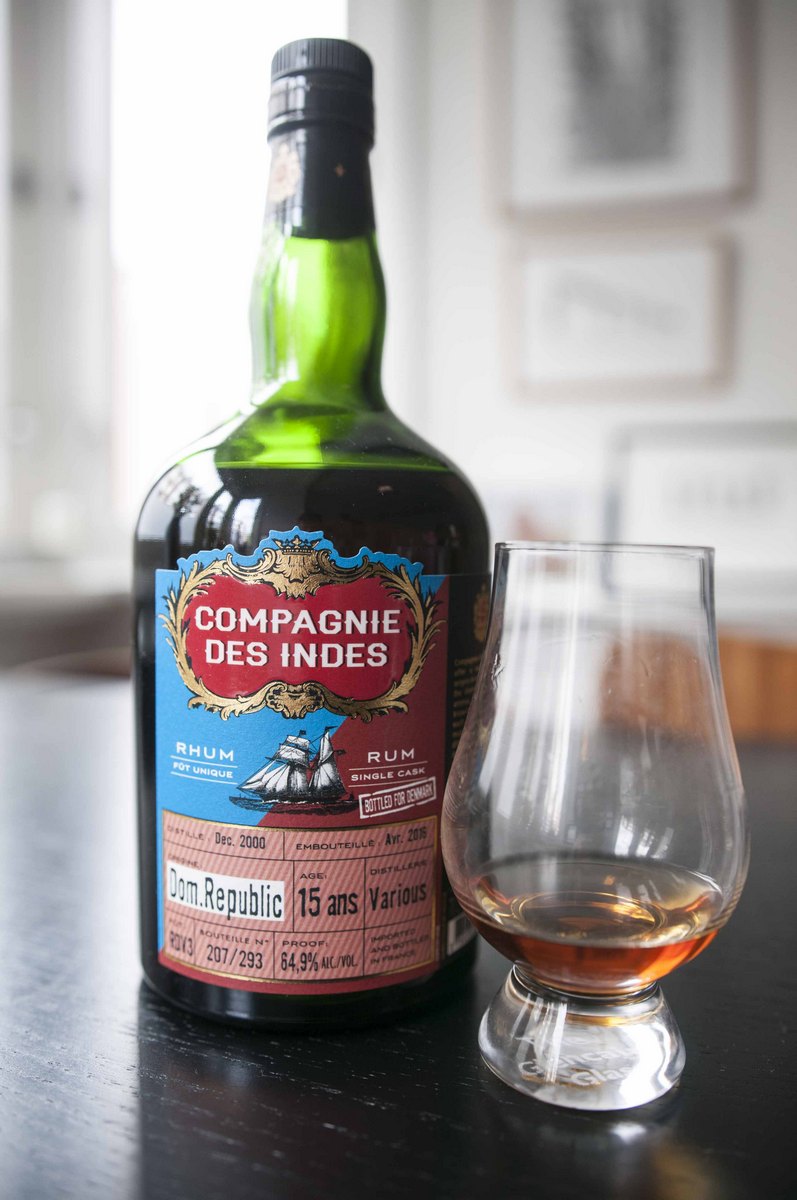 Photo courtesy of and (c) Mads Heitmann of romhatten.dk

One of the interesting things about the Compagnie des Indes Dominican Republic rum we’re looking at today, is that we don’t often see rums from the half island go into anything except a mild standard strength blend.  It’s rare to see a single cask version and even rarer at this kind of power – 64.9%. Here is a rum that at that level of oomph had to be a special edition for Denmark only (see other notes), probably because nobody back in the day wanted to take a chance on a rum and a country not known for individualistic excess of any kind.

In 2020, of course, when new indies are popping up everywhere and cask strength is considered almost a new standard, such a thing is the sort of amusing tale we relegate dismissively to “them old days”, but it’s instructive to note how recently the situation actually was – the rum was released in 2016.  Another peculiarity about it is the lack of information about who made it – none of this “Secret Distillery” business, just a cryptic note of “various” distilleries – this tells us that it was likely procured from either one or more of the “Three B’s” – Bermudez, Barcelo or Brugal – or Oliver & Oliver (who produces such indeterminate blends).  The assumptions this also forces us to make are that it is from column stills, a blend, and blended prior to ageing, not after. Knowing the Compagnie, I don’t think it’s a stretch to suggest ageing was continental.

Still, I do appreciate the extra intensity the 64.9% brings and the ageing of fifteen years is nothing to sneeze at. The nose bears this out in some ways – it’s powerful, yes, but very light and clear, with a clean and somewhat sweetish nose. Fruits like peaches, cherries, a slice of pineapple and a red grapefruit are present, though oddly muted.  To this is added tannins, oak, shoe leather, citrus, and aromatic port-infused cigarillos, which nose well but seem tamped down, even tamed, not as furiously pungent as might have been expected. 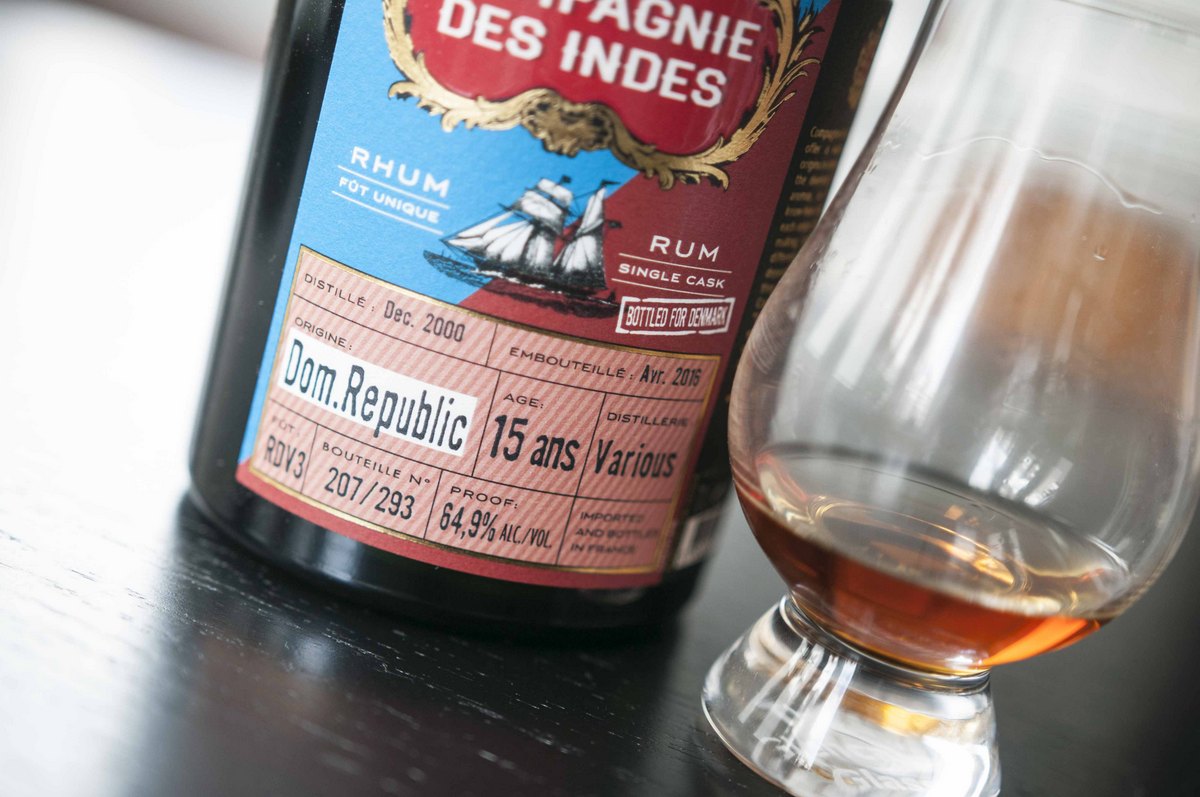 Photo courtesy of and (c) Mads Heitmann of romhatten.dk

The palate is pretty good, though.  The tart and sweet nose gives way to a more musky, nutty and coffee-like flavour, with chocolate and mocha, a bit bitter. The sweetness noted on the aromas was less prominent here, while, with some water, the fruity component went up, and developed hand in hand with an interesting salty tang, nuts, dates and teriyaki sauce (go figure). Finish is good but not exceptional: medium long, fruity aromas of ripe mangoes, pineapple and sweet soya sauce, and a whiff of salt caramel.

A single cask full-proof rum from the Dominican Republic is harder to find nowadays, even from an independent, and my impression is that CdI (or Florent – to speak of one is to speak of the other as is the case with most small indies) found it uneconomical to release such a rum which in any event lacked precision – it had been blended before it went into the cask in 2000, and then aged for 15 years, releasing a mere 293 bottles.  It’s likely that though it sold and he didn’t lose money, he found it more efficient to go more seriously into blended rums, like the well-received Dominidad series of Dominican/Trinidadian hybrids which did away with the limited outturn of the DR 2000 and expanded his sales (he has remarked that blends outsell the single cask offering by quite a margin, an experience shared by 1423 in Denmark).

Well, whatever. Moving away from this single-country, multi-distillery type of rum was probably the right decision – because although CDI has made a few others from the DR, younger ones, they are not well known, probably for the same reason this one has faded from our senses: overall there’s something indeterminate about it, and it lacks an element of real distinctiveness that might make you run to find your credit card. In other words, while the CdI DR 15 YO is too well made to ignore completely, there’s also nothing specific enough here to recommend with real enthusiasm. 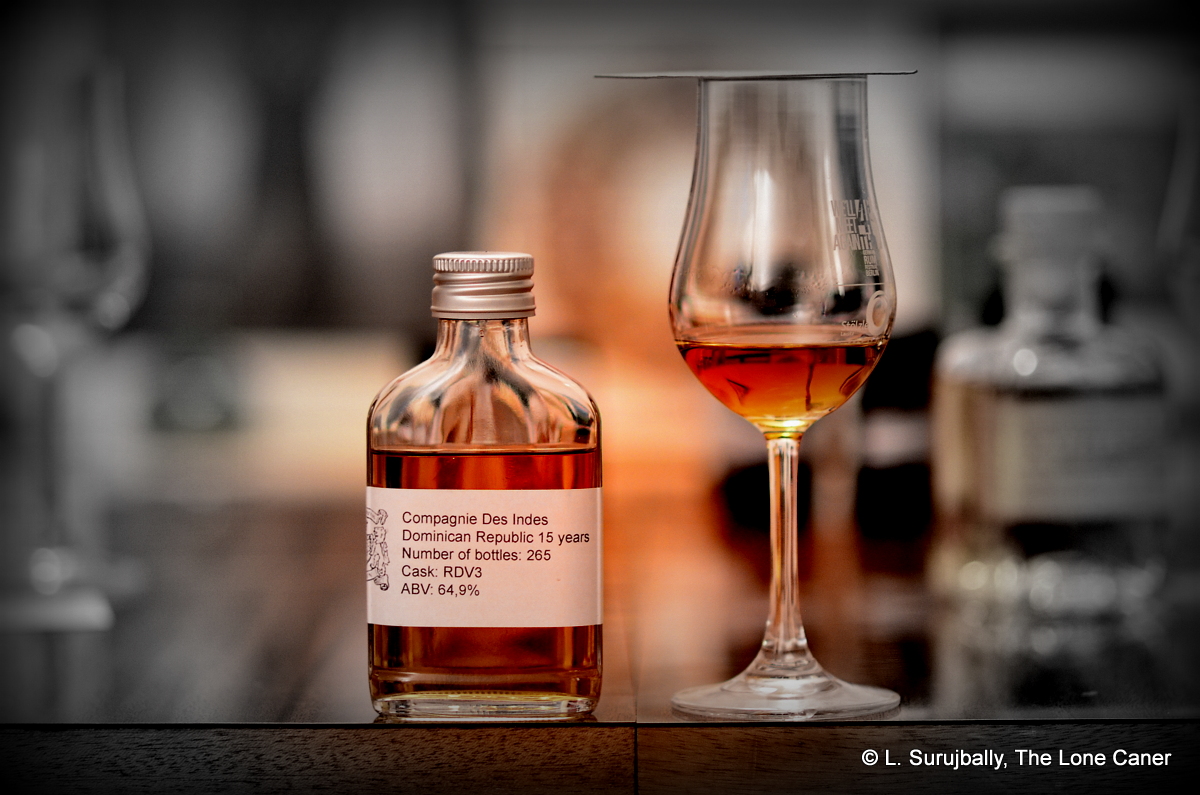