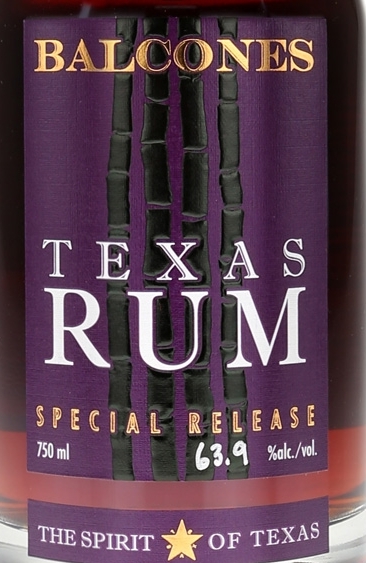 We don’t much associate the USA with cask strength rums, though of course they do exist, and the country has a long history with the spirit. These days, even allowing for a swelling wave of rum appreciation here and there, the US rum market seems to be primarily made up of low-end mass-market hooch from massive conglomerates at one end, and micro-distilleries of wildly varying output quality at the other. It’s the micros which interest me, because the US doesn’t do “independent bottlers” as such – they do this, and that makes things interesting, since one never knows what new and amazing juice may be lurking just around the corner, made with whatever bathtub-and-shower-nozzle-held-together-with-duct-tape distillery apparatus they’ve slapped together.

Balcones, a central Texan outfit from Waco named after a fault line running through the southern half of the state, is a bit more than the kind of happy backyard operation my remarks above imply — they are a primarily whiskey distilling operation, started a decade ago, and their website has a great backstory about how it all started in an old welding shop under a bridge in Waco into which, after some refurbishment, they installed copper pot stills from Portugal, and shoehorned a whisky distillery inside. And after a few years, they began to make rum as well, because, well, “We like to drink rum so why not give it a shot?” as Thomas Mote the distillery manager cheerfully remarked to me.

Okay, so let’s see if they succeeded. Consider first the nose. For all of the 63.9% it’s quite warm and smooth: it started out with a musky scent of damp earth, a sort of mustiness that reminded me a of a warehouse chock-a-block full of old cardboard boxes, brine, salt and sweet olives. Then it became somewhat more bourbon-like – raisins, molasses, fleshy fruits starting to go off, then caramel, nuts, butter, vanilla and ice cream. It smells curiously indeterminate – which is why detailed fruity notes can’t be listed – you know there’s a lot of stuff here, but it’s tough to come to grips with them individually.

On the palate, after exercising all the usual precautions for a rum this strong (take a rather small sip until things settle down, because the taste is sharper than the nose leads one to believe and remember, it’s a 63.9% saloon brawler that does its very best to clean the bar counter and rip your face off at the same time), I sensed a salt-rye-fruit-bourbon soupcon of flavours on the palate: a combo of salt, sweet and sour — vegetable soup, sour cream, maggi cubes and deep caramel and vanilla notes, all at once, circling each other for dominance and advantage. The fruits – papayas, very ripe peaches in syrup – were set off by muscovado sugar and light molasses without much citrus lending a sharper note (though there was some) and to which was added hazelnuts, some sweet olives and brine, dark chocolate, cherries, fading out quietly (and lengthily) to a pleasant, warm, aromatic conclusion redolent of cherries, flambeed bananas and molasses, but nothing significantly different from the tastes that had preceded it.

Balcones was swiftly and remarkably forthcoming to all the usual inquiries, noting that it was 100% pot still and used a blend of Barbados-Style Lite Molasses and Blackstrap from Louisiana and Guatemala respectively, fermented for 4-5 weeks (much longer than anything else they make), and they play around a bit with yeast and an undisclosed dunder process to add to the flavour profile. Ageing is between 2-4 years and the rum is made in annual batches of a few thousand bottles at most, and no additives of any kind (“oak and time!” they told me proudly). 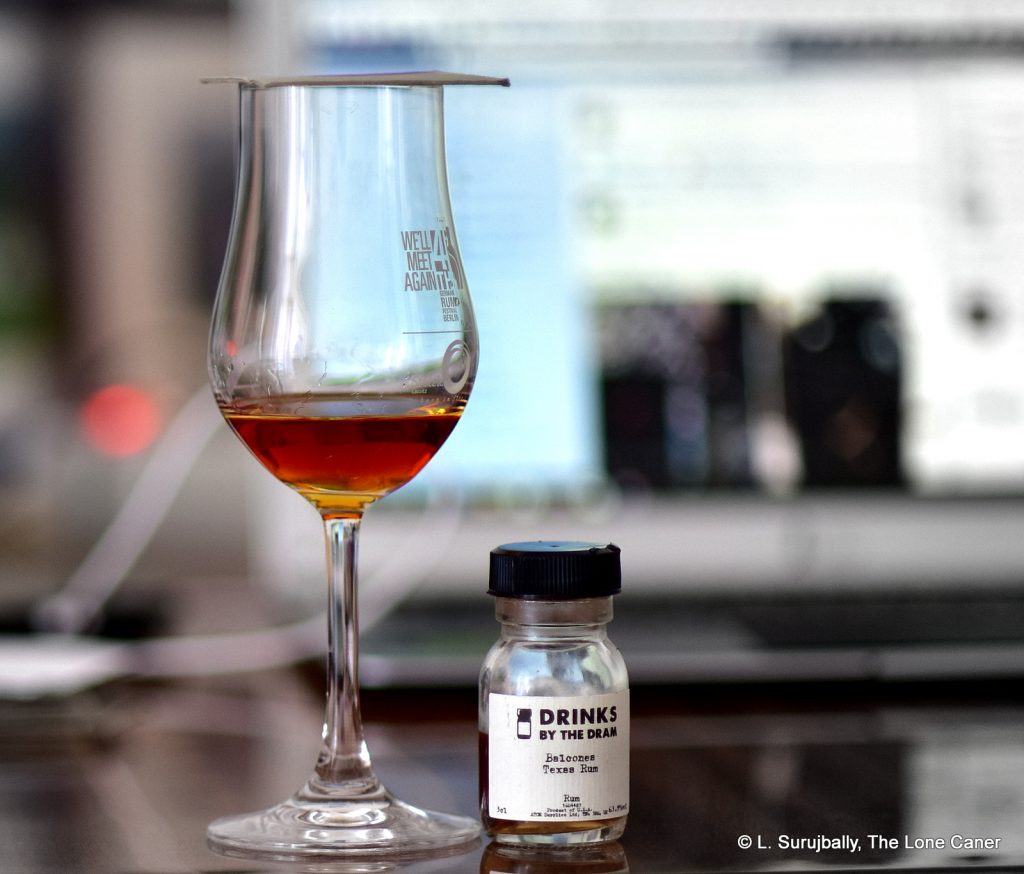 Still, taking apart those tasting notes, a number of things jump out. The caramel and vanilla and molasses notes are not precisely domineering, but very much in evidence, to the point of taking over — there’s a sort of dampening effect of the musky and more solid flavours which prevent sharper, crisper, clearer ones (fruits and citrus and florals) from emerging properly and engaging. The range of tastes on show lacked the complexities one expects of even a lightly aged rum, and yes, it actually has a profile reminiscent of a rye or bourbon, maybe a tad richer and sweeter and more congener-rich….more rum-like, if you will. It’s a pretty nifty drink for that strength. It reminds me of my first encounter with Potter’s Dark, yet it also presents as simpler than it could have been, which makes me ask myself, as I always do with such a profile and which seems to be somewhat of a characteristic of many of the US rums I’ve tried, what is it they really want to be making and was too much whisky lore infusing the rum?

I’ve remarked before that most new and smaller US distilleries seem to be more interested in making whiskies and produce rums as something of an afterthought. Whether not not that’s the case here, Balcones has evidently given the matter quite a bit more thought than usual, and come up with a product that deserves real attention (the business with the yeast and dunder points there). It’s unquestionably a rum; it’s got real fire in its jock; it’s rum-like enough to please, while also original enough to encourage a double-take, and an all-round powerhouse fun rum. I think I’m going to keep an eye on these guys going forward – there’s some interesting stuff going on in Waco, and I hope that they expend their production to a larger stable, aged more, in the years to come. Certainly their initial full proof rums give us a lot of reason to appreciate what they’ve done so far.

The Special Release is issued annually since 2013 (twice in 2014), but identifying the year is difficult. To the best of my knowledge, mine is from the 2016 season.