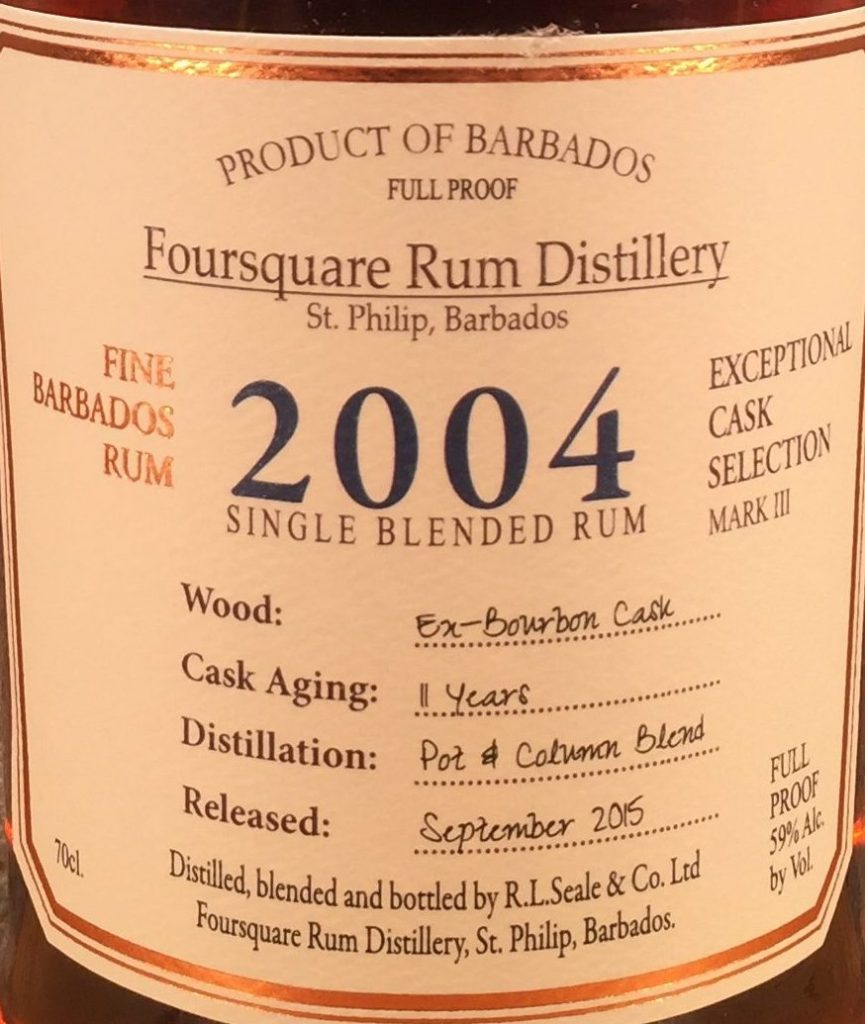 The wholly-Bourbon-cask-aged Mark I 10 YO “1998” was, in my opinion, a toe in the water, issued at a meek 40% and seemed like a way to test whether a different blending philosophy could be used to move away from the RL Seale’s 10 YO, Rum 66, Doorly’s XO and 12 YO rums without replacing them entirely. The Port Cask Finish released six years later in 2014 wasn’t getting too adventurous with its strength either, but it did show where Foursquare’s thinking was heading: a pot/column blend aged three years in bourbon barrels, six in port barrels.  As I recall from the year it came out, it made a modest kind of splash – “an interesting new direction for Foursquare” went one supercilious FB comment – but the madness of today’s sell-out-before-they-go-on-sale had to wait a little longer to gain real traction.

That strength provided the 2004 with a crisp snap on the nose that was quite a step up from anything from the company I had tried before.  It was fruity, precise and forcefully clean in a way that clearly demonstrated that a higher proof was not a disqualifier for greater audience appreciation.  It smelled of wine, grapes, red grapefruit and mixed that up with scents of sourdough bread, unsweetened yoghurt and bananas. As if that wasn’t enough, after standing for a while, it exuded aromas of coconut shavings, irish coffee, vanilla, cumin and cardamom that invited further nosing just to wring the last oodles of scent from the glass.

Sometimes a proof point closing in on 60% makes for a sharp and searing experience when tasted – not here.  With some smooth blending skill, it remained warm-verging-on-hot, going down without bitchiness or spite. It tasted smoothly of vanilla and coconut milk and yoghurt drizzled over with caramel and melted salt butter. It developed a smorgasbord of fruits – red grapes, red currants, cranberry juice – with further oak and kitchen spices like cumin and coriander bringing up the rear.  There was even some brine and red olives making themselves quietly known in the background (the brine came forward over time), and while the finish wasn’t all that long, it provided a clear finish of oak, vanilla, olives, brine, toffee, and nougat, and was in no way a let down from what had come before, and I enjoyed this one a lot

The week after this review went up in October 2018, I named the entire 8-rum series of the Exceptionals to that point, as “one” Key Rum of the World. The tag still fits, with all the subsequent releases merely adding to the rep of the line.