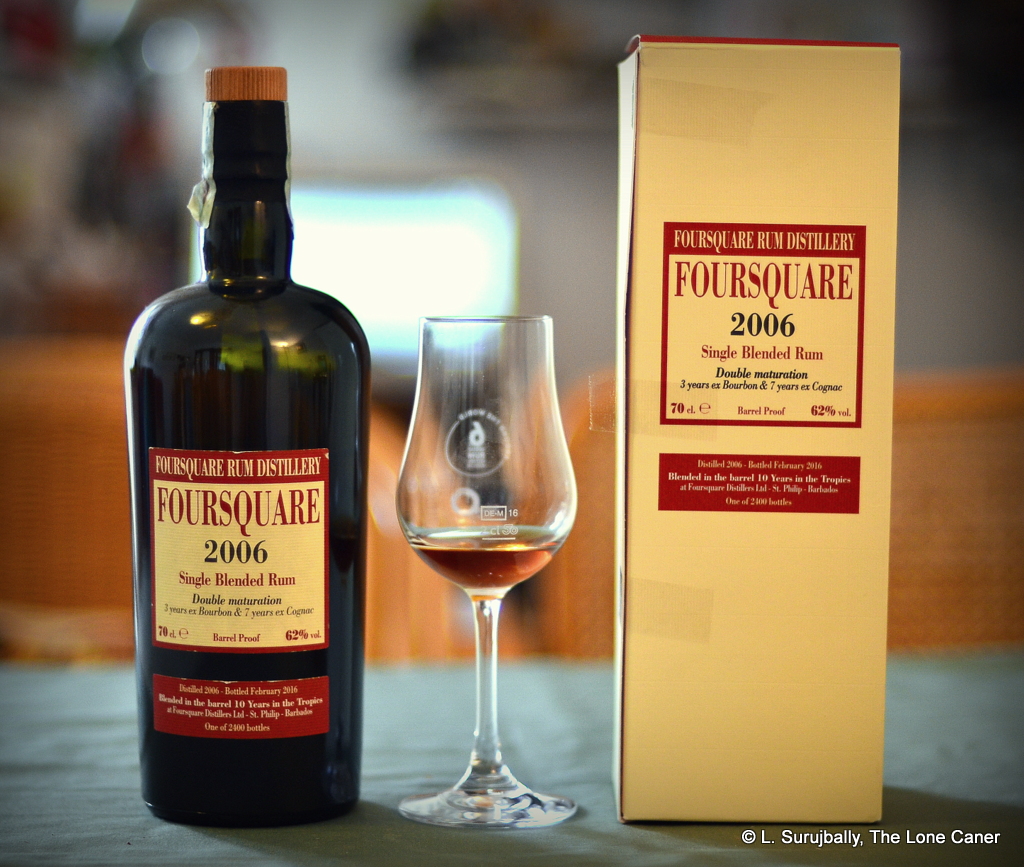 A spectacular rum from Foursquare (and Velier), perhaps the best they’ve ever made to date.

This is a rum that screaming aficionados were waiting for like fans at a Justin Bieber or Beyonce concert (or the Rolling Stones, maybe), and no write-up of the thing could be complete without mentioning the unbelievable sales pattern it displayed…in my entire rum-purchasing experience, I’ve never seen anything like it. The Velier/Foursquare collaboration was making the rounds of various masterclasses in festivals around the world for almost a year before actually going on sale, and then, when it became available in August 2016 (primarily in Europe), it sold out in fifteen minutes.  All this without a single formal review being issued, just word of mouth.

The only comparator in recent memory that I can think of might be the Panamonte XXV, which also flew off the shelves, and which also illustrates how far along the rum world has come in less than five years.  When I got that one, it was considered one of the best rums of its kind, receiving raves across the board – and indeed, for its age (25 years), strength (40%) and price ($400) it was well positioned at the top of the food chain…back then.  But even in 2012 many of us aficionados had moved on past the self imposed 40% limitation, and while the Panamonte was certainly a good product, it was also, perhaps, a high water mark for standard proof rums – people who know enough and have enough to want to drop that kind of coin, have by now migrated past that anemic proofage and demand cask strength, definitively pure rums which are made by trusted sources.  This is why Arome’s five hundred bottle outturn of their new Panamanian 28 year old, about which not much is known aside from the marketing campaign and some FB dustups, is likely to be met with indifference from those who actually know their rums (though not from those with money), while 2400 bottles of Foursquare’s ten year old have become unavailable faster than you can say “wtf” in Bajan. 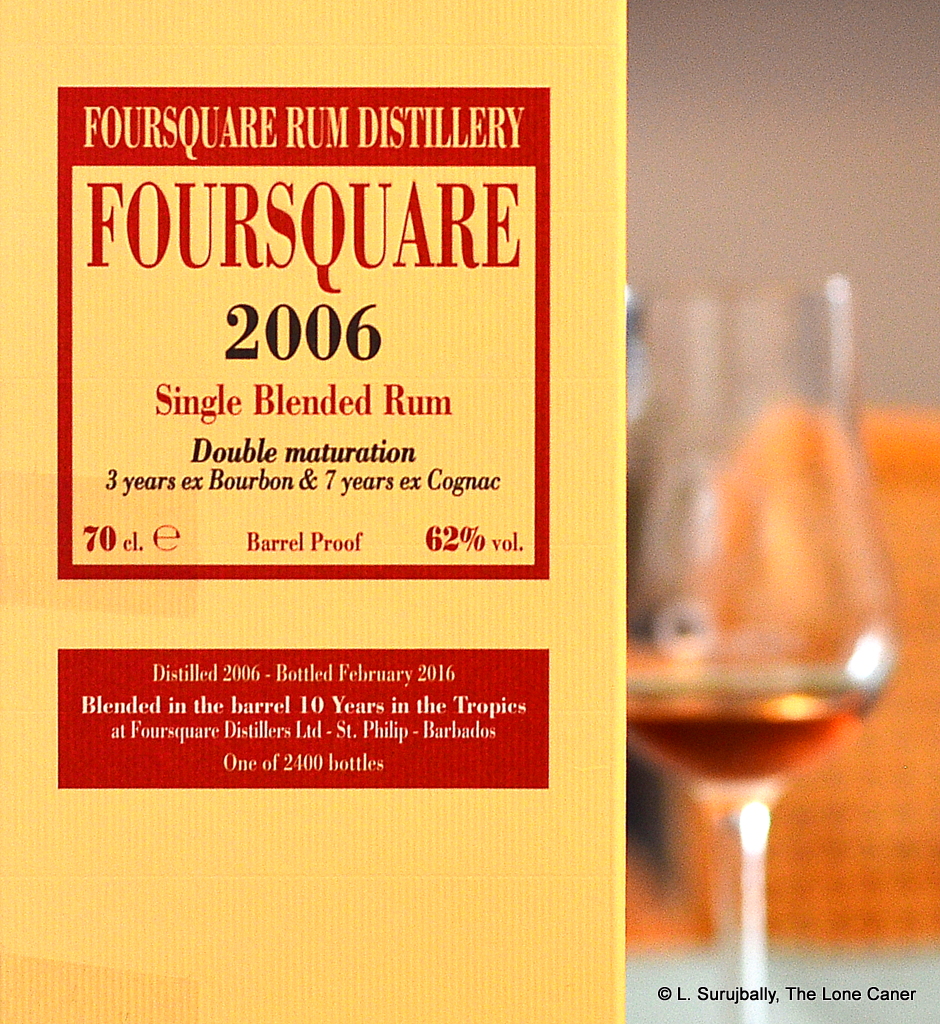 And once the bottle gets cracked, you can understand why.  Because it’s an amazing rum, sold at a (low) price that would be an insult if it wasn’t so good, for something that ticks all the boxes: cask strength, check; no additives, check; issued in collaboration with one of the most famous names in the pure-rumworld, check; by a distillery long known for championing a lack of additives, check; by being trotted out at exclusive masterclasses where word of mouth made it a must-have, check.  This thing is like an exquisite small foreign film that gains accolades in the filmfest circuit  before heading off to the oscars and cleaning up there and at the box office.

Can any rum really live up to such expectations?  I don’t know about you, but it sure upended mine, because my first reaction when I opened it and sniffed was a disbelieving “what the f…?” (in Bajan).  It banged out the door with the kinetic energy of a supercar popping the clutch at 5000 rpm, blowing fierce fumes of briny olives and caramel and oak straight down my nose and throat, before someone slammed on the brakes and eased off.  What I’m trying to put over in words is something of the power of the experience, because it blasted off fast and furious and then settled down for a controlled, insane smorgasbord of nasal porn – nougat, white toblerone, peaches, citrus peel, chocolate, coffee grounds, cinnamon, enough to drive a Swiss confectioner into hysterics.  The creaminess of the nose was simply astounding – it was almost impossible to accept this was a 62% rum, yet it purred smoothly along without bite or bitchiness, scattering heady aromas of fruity badass in all directions – prunes, plums, blackcurrants and dark olives.

And meanwhile, the taste of the rum, its glissading force across the palate, simply had to be experienced to be believed.  Not because it was all sound and fury and stabbing tridents of Poseidon, no (although it was powerful, one could not simply ignore 62% ABV), but because it was such a controlled strength.  And what emerged from within the maelstrom of proof was amazingly tasty – apricots, plums, raisins, blueberries, cinnamon, rye bread with butter and honey, all creamy and chewy to a fault (and that was just the first five minutes).  With water even more came boiling to the surface: dark grapes and an enormous array of fruity and citrusy notes, tied up in a bow with more caramel, coffee grounds, black unsweetened chocolate paprika…man, it was like it didn’t want to stop.  Even the finish upended expectations, being neither short and fleeting, nor overstaying its welcome, but almost perfect, with some floral hints, an interesting driness, and some nuttiness to accompany all that had come before, pruned down to a fierce minimalism emphasizing both heft and subtlety at the same time.

It would be arrogant in the extreme for me to say this is the best rum ever made in Barbados, since I haven’t tried every rum ever made in Barbados.  But I can and must say this – the rum points the way to the future of top-class Bajan popskull just as surely as the Velier Demeraras did for the Guyanese, and is, without a doubt, the very best Barbados rum I’ve ever tried. It’s a magnificent rum that leaves all its forebears, even those from the same distillery, limp and exhausted. This rum’s titanic flavour profile satisfies because it gets right what its previous (and lesser) earlier versions from Foursquare failed to come to grips with. It is impossibly Brobdignagian, a subtlety-challenged brown bomber, and to fully savor the current rum’s character, we as drinkers must first connect with its predecessor’s lesser-proofed antecedents.  That’s why I went through other rums from the company before cracking the 2006.  Somehow, after years of 40% milquetoast from  Barbados, here, finally, two giants of the rum world came together and got this one absolutely right.  It deserves every accolade that rum drinkers and rum writers have given it.