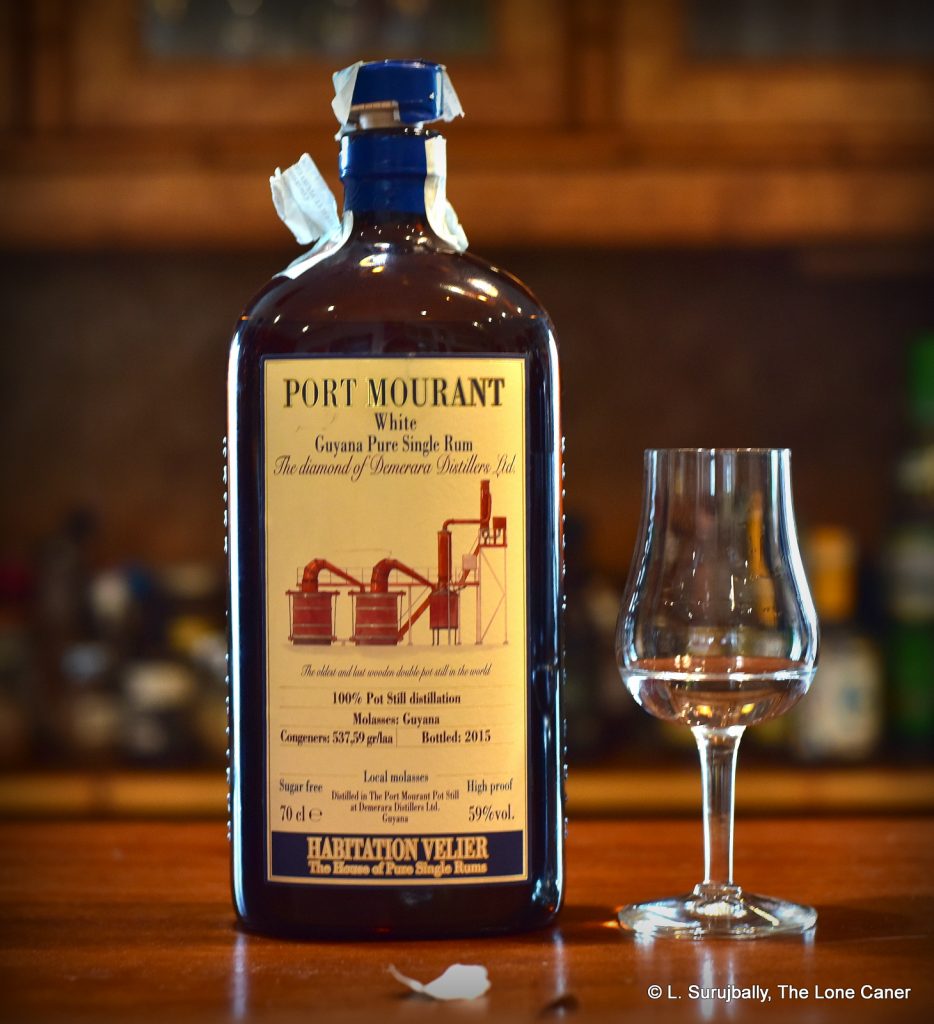 The question of why Velier would want to issue a well-endowed, claw-equipped high-test like this, is, on the surface, somewhat unclear.  Because my own opinion is that this is not a product for the general marketplace. It’s not aimed at beginners, 40% strength lovers or those with a sweet tooth who have two of every edition of the Ron Zacapa ever made. It’s an utterly unaged cask strength white with serious strength one point short of 60%, to which is bolted a massive 537.59 g/laa of esters…that puts in the realm of the Rum Fire Jamaican white, and that one packed quite a bit of gelignite in its jock, remember? Aside from serious rum-junkies, ester-loving deep-dive geeks and Demerara-rum fanboys (I’m all of these in one), I wonder who would buy the thing when there are so many great independent offerings of an aged Demerara out there (many of which are Port Mourant still rums themselves).

Let’s see if the tasting notes can provide some insight. At 59% ABV, I was careful with it, letting it open for a while, and was rewarded with quite an impressive and complex series of aromas: rubber and plasticene, nail polish remover, followed by a combination of sugar water, brine, watermelon, pears, roasted nuts, plus a firm, crisp-yet-light fruitiness which the strength did not eviscerate.  That’s always something of a risk with high proof rums, whose intensity can obliterate subtler nuances of flavour on nose or palate. 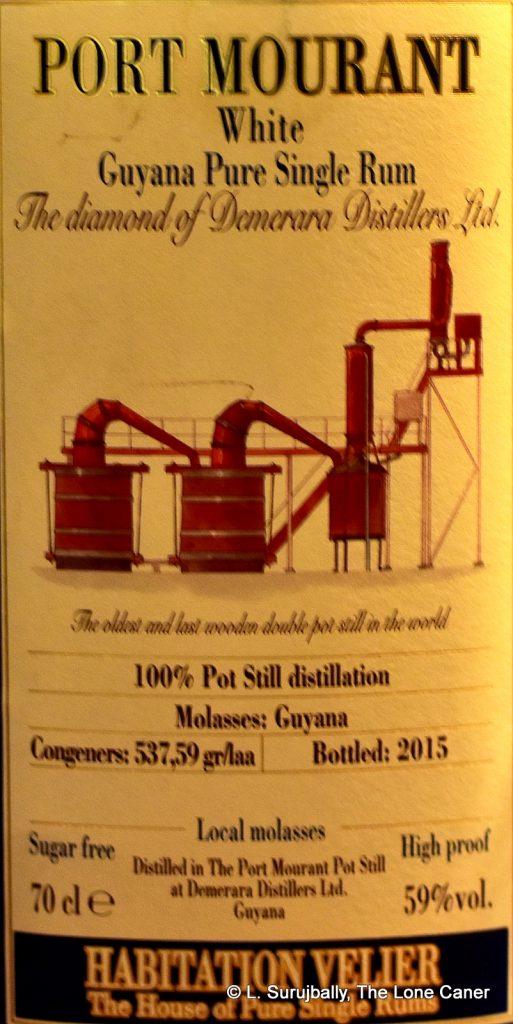 Unaged rums take some getting used to because they are raw from the barrel and therefore the rounding out and mellowing of the profile which ageing imparts, is not a factor.  That means all the jagged edges, dirt, warts and everything, remain. Here that was evident after a single sip: it was sharp and fierce, with the licorice notes subsumed into dirtier flavours of salt beef, brine, olives and garlic pork (seriously!). It took some time for other aspects to come forward – gherkins, leather, flowers and varnish – and even then it was not until another half hour had elapsed that crisper acidic notes like unripe apples and thai lime leaves (I get those to buy in the local market), were noticeable. Plus some vanilla – where on earth did that come from?  It all led to a long, duty, dry finish that provided yet more: sweet, sugary, sweet-and-salt soy sauce in a clear soup. Damn but this was a heady, complex piece of work. I liked it a lot, really.

Reading those tasting note and looking at the stats of the rum, I think you’d agree this is not your standard table rum; maybe even one that only a madman or a visionary would try to make money from, when it’s so obviously stuffed with sleeping leopards. Who on earth would make this kind of thing; and then, having been made, who is addled enough to buy it? Drink it?  And why?

To answer those questions, it’s useful to look at the man behind the rum.  Luca Gargano, whose Five Principles are now the source of equal parts merriment and respect, doesn’t often say it in as many words, but obeys another: I call it the Sixth Rum Principle, and it suggests that Luca believes that rum should be made pure, fresh, organic, without additives of any kind from cane through to still.  If he had a choice, I’m sure he’s prefer to have wild yeast do the fermentation of a wash gathered in the bark of trees hollowed out by the latest hurricane.

But a codicil to the Principle is simply that a rum need not necessarily be aged to be good…even fabulous. Now for a man who selected and popularized the extraordinary Port Mourant series of aged rums, that seems like bizarre thing to say, but look no further than the clairins from Haiti which have made such a splash in the rumiverse over the last four years, or any of the unaged French Island whites, and you’ll see that may really be on to something.

And that leads to the intersection of the Port Mourants and the Principle. I’m sure Luca was perfectly aware of the quality and reputation of the PM 1972, PM 1974 and PM 1975….to say nothing of the later editions. “What I wanted to do,” he told me recently in that utterly sure, subtly evangelic voice he uses in rum festivals around the world, “Is demonstrate how the rum everyone likes and appreciates – the Port Mourants, Foursquares, Jamaicans – started life.  Okay, they’re not for everyone. But for those who really know the profiles of the islands’ rums blind, they can now see what such rums were before any ageing or any kind of cask influence.”

Drinking this rum shows what results from applying that principle. There’s a whole raft of these whites out in the market right now, distinguished by lovely drawings of the stills from which they originate. I’m not sure how they sell, or who’s buying them, or even if they are making a splash in the perceptions of the larger rum world.  All I know is it’s an amazing rum that one should try at least once, even if it’s just to appreciate for the one time how the raging cataracts of a Port Mourant distillate started out, before the torrent of taste calmed down, evened out…and flowed into the ocean of all the other great PMs we have learnt to know and appreciate over the years.