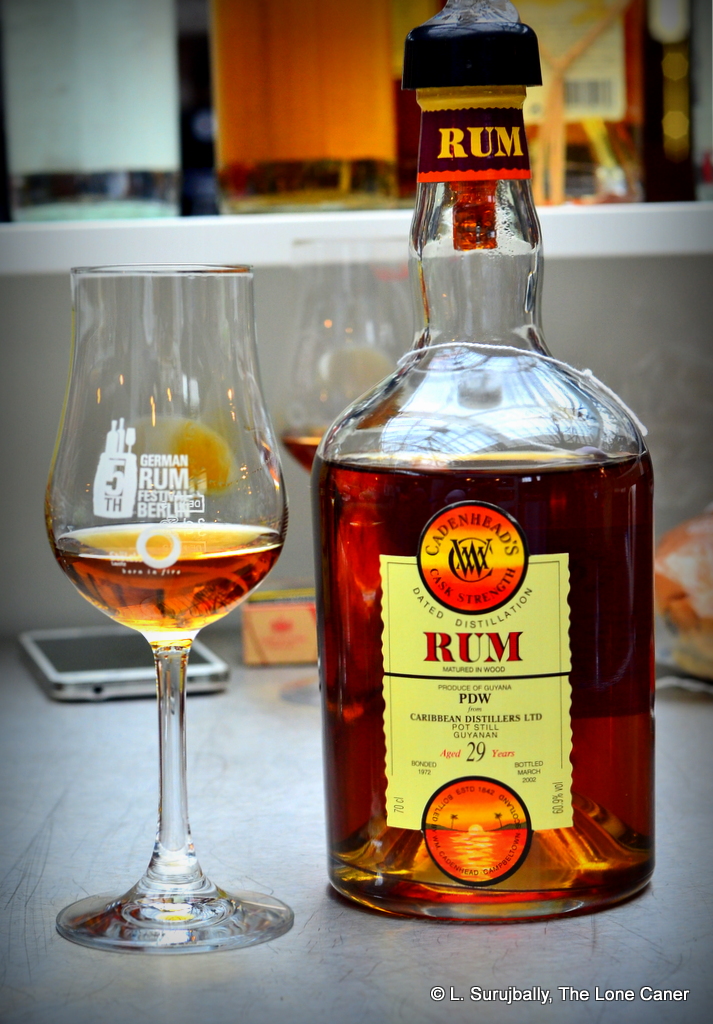 I spent days trolling around trying to find out what those initials meant and came up dry. I was left thinking that if Cadenhead doesn’t get its act together, it’s going to be a running joke that they’re clueless as to how to name their rums, and maybe I’ll solicit lottery entries for best guess what these initials represent.

But that’s just me and somewhat irrelevant, so let’s just rewind to the beginning. Caribbean Distillers Limited was and is not a distillery of any kind, merely a now-dormant subsidiary of DDL (Yesu Persaud and Komal Samaroo were/are its officers), incorporated in the UK in 1986 with £100 share capital. It seems reasonable to assume it was the distribution arm for DDL in Europe, or a vehicle for financial transactions which would have been difficult to carry out from Guyana, where extremely stringent exchange controls existed at that time. So by the time Cadenhead bought their barrel(s) it was from this company which in turn had access to all of DDL’s exported aged rums. 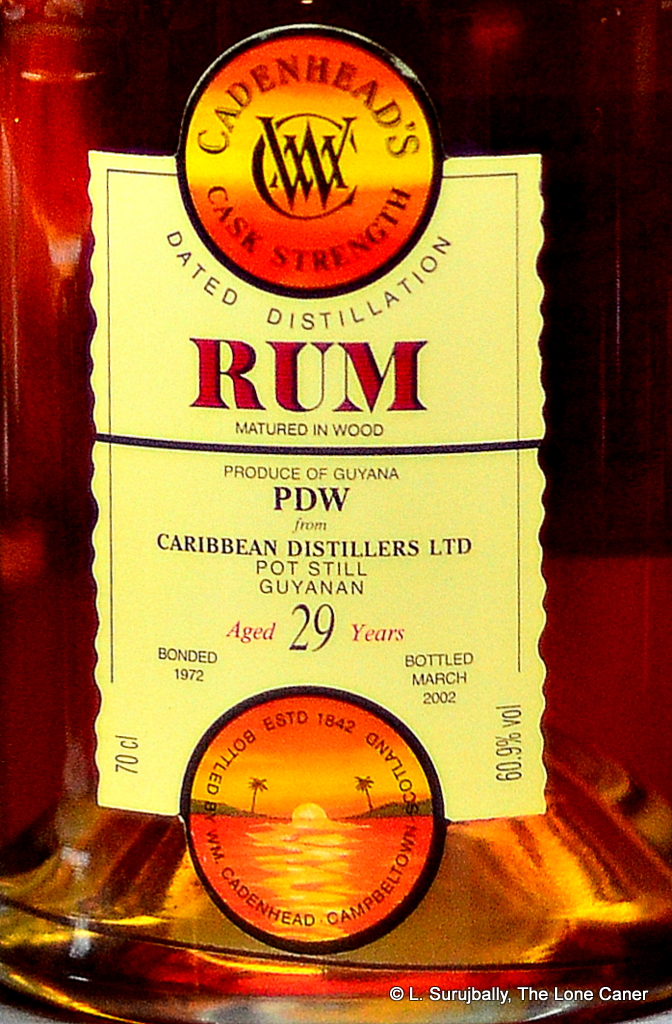 The most common geriatrics one can still find (and, perhaps, afford) are those from the 1970s made in limited runs by the whisky makers – we’re not all like Uncle Serge, who just reviewed the Samaroli 1948 Longpond the other day. And, yes, of course even older ones do exist — the Saint James 1885 proves that — but they’re usually far too pricey and in many cases just made in some far away time, and are not normally thirty or forty years old. So it was with some appreciation that I sprung some of my hard earned cash to buy a sample of this hoary 29 year old Cadenhead, dating back from 1972, and bottled at a whopping 60.9%. You gotta love those Scots – as far back as 2002, way before us writers were even out of rum-diapers and we all and only loved living room strength, they were out there pushing fullproof mastodons.

Is it worth it, if one can find it? I suggest yes, and for those of you who are shrugging (“Ahh, it’s just another strong rum”), well, I’ll just dive straight into the tasting notes and maybe that’ll hold your waning attention. Certainly nothing else would express my appreciation quite as well. Starting with the nose, it was aggressive and spicy but without any serious damage-inducing sharpness redolent of massive pot still crazy – in fact, it presented almost creamily, with coconut shavings, vanilla, exotic baked fruit in a cream pie (think a steroid infused lemon meringue), and the vague delicacy of flowers rounding out the backend. With water it opened up spectacularly: it went all citrusy, tartly creamy, very fruity, tacking on some licorice – I was left looking wonderingly at the amber liquid in the glass, wondering what on earth this really was: a Port Mourant? Emore? John Dore? For my money it’s the single wooden pot still (VSG marque), because it lacks some of the depth of the PM and I had enough Enmores to believe it wasn’t that. But that’s only a guess really, since nobody knows what the PDW stands for.

Anyway, I was equally pleased (enthused might be a better word) with the taste, which was, quite frankly, an edged weapon of dark rum magic. Everything I liked in a Demerara rum was here, and in great balance without excess anywhere. First there were prunes and other dark fruits – raisins, blackberries, blackcurrants. To this was added licorice, slightly bitter-and-salty burnt sugar and caramel. Oakiness was kept way back – it was a breath, not a shout. These core flavours were circled by sharper citrus notes, as well as some of that lemon meringue again; faint green grapes, some apples, and a pear or two, nothing serious, just enough unobtrusive small flavours tucked away in the corner to garner appreciation for the rum as a whole. And while forceful, the 60.9% was really well handled, leading to a heated finish redolent of much of the above (and nothing markedly different, or new) that went on for so long I nearly feel asleep waiting for it to stop. In short, this was a magnificently aged rum. Maybe I should be genuflecting.

So far, just about all rums from the disco decade I’ve tried have been very old ones (not necessarily very good ones in all cases), aged two decades or more, bottled at the beginning of the rum renaissance in the 2000s. There’s Velier’s PM 1974 and Skeldon 1973, Norse Cask 1975, Cadenhead’s own Green Label 1975 Demerara, and a few others here or there….and now this one. The PDW is a big, growly, deep, tasty rum, and if you’re tired of Veliers, go see if you can find it. It’s a triumph of the maker’s imagination and the difficulties of ageing that long. It couldn’t have been easy to make, or decide when to stop, but Cadenhead seems to have kept at it and at it, and waited to bottle the thing only when they were sure, really sure, they had it absolutely right. And they did.