“Aguacana” is as good a term for this cachaça as any other, denoting as it does “water of the cane” There are few titles more appropriate, because at 37.5% you’re really not getting very much out of the Brazilian drink, and even in a mix I sort of wonder what the point is and how well something this frail would fare in a caipirinha. I’m aware that it’s somewhat snobby, but seriously, 37.5% is edging out of spirits territory altogether and into some kind of never-never land of “please don’t hurt me” for the timid, and my preferences don’t run that way. Note the label by the way – it says “The Original for a Caipirinha,” which I think every such drink under the sun claims to be

Background information is as skimpy as the taste profile. The rum is made under the auspices of Bardinet, a French spirits company founded back in the 1850s by Paul Bardinet who worked on blending and taming sugar cane alcohol that was shipped to France. These days the name Bardinet (with respect to rums) is probably better associated with the Negrita and Old Nick brands, but since 1993 they have been the La Martiniquaise-Bardinet Group and control Dillon, Depaz and Sainte-Marie on Martinique, as well as Distillerie de Marie Galante and SIS in Guadeloupe. So certainly their lineup has real heft in it. As for the Aguacana, it’s one of the many brands within the group and that’s about all I could dig up – I don’t even know where specifically in Brazil it’s made. From the paucity of the information and lack of any kind of serious marketing, I get the impression it’s an afterthought meant to round out the portfolio rather than a serious attempt to make a commercial statement or break the Brazilian market. 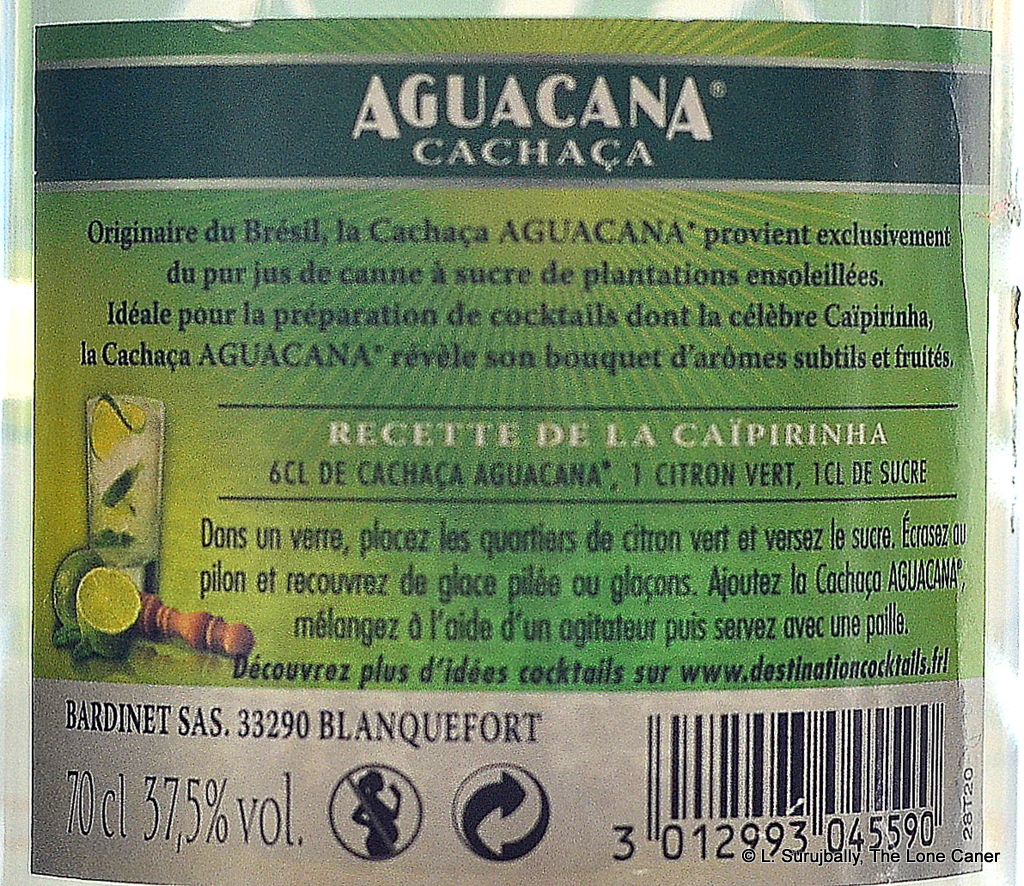 Slight improvement on the palate. It presented a clean and spicy-sharp alcohol taste, quite dry, and was weak and near ghost-like at everything else – one senses there’s something there, but never entirely comes to grips with anything. So I let it rest, came back to it over a period of hours and noted tastes of iodine, watermelon, cucumbers in vinegar, flowers, and the ever-present sweet sugar water that so far has been a characteristic of every cachaça I’ve ever tried. Overall it was watery in the extreme, and even though sometimes ageing in oddly-named Brazilian woods imparts some off-base flavours to the profile, here there was none of that at all. “Slightly flavoured water” is what I remember grumbling to myself, before also noting that the finish was “inconsequential, with no aspects of profile worth mentioning that haven’t already been sunk by the mildness” (yes, my notes really do read like that).

Perhaps it’s unfair to judge a drink that is not meant to be anything but a cocktail ingredient as a neat sipping spirit, and you’d be within your rights to make the criticism. Still, you have to know what it’s like on its own before you go making a mix, right? How else are you going to know what to add? In fine, the Aguacana is a meek and inoffensive and ineffective cachaça, which does the job of making a shy caipirinha easy enough since just about anything added to the glass would alter the profile to what is desired (which may be the point). The relaxation and the buzz will arrive eventually, but if you really want a sense of what the rum is like by itself, you’ll spend a long time waiting for any kind of flavour to chug into the station. And as for me, I’ve got better rums to try, so I’ll pass on this in the future unless Mrs. Caner feels generous enough to whip up a drink for me.