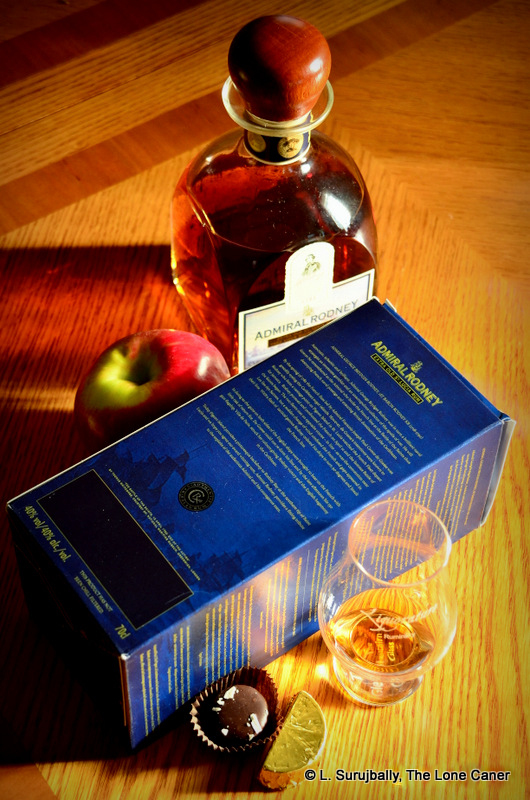 Soft, smooth, tasty. I’d rank it as a mid range sipping-quality rum. You won’t regret the purchase if what you’re after is something that lacks the relative spiciness of a Cuban or Jamaican product and trends more to the softer Bajan style.

St Lucia Distillers is the only remaining distiller remaining in St Lucia after the closures of many other companies on the island in the last hundred years, and a consolidation of the last two — Barnard and Geest — in 1972. It is now owned by CLICO’s parent company CL Financial out of Trinidad 1, which has had its share of financial problems in the last years, and also owns a majority stake in Appleton Estates, the Jamaican rum maker, as well as Angostura in Trinidad itself. In the spirits world I guess you could say they are a bit like a small Diageo of the Caribbean. 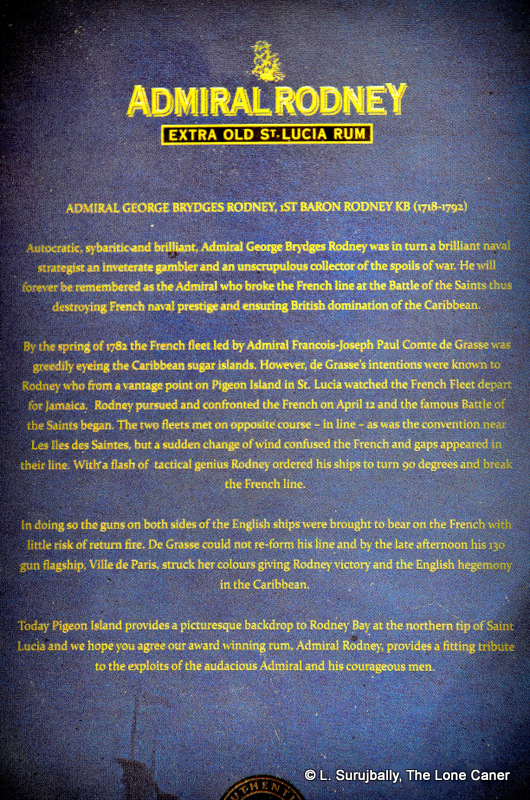 St Lucia Distillers source molasses out of Guyana to make their excellent series of top-end rums, primarily this one and the 1931 – I choose not to accept that the decent (but not superlative) Chairman’s Reserve Forgotten Casks is a true premium rum. The Admiral Rodney rum is named after the British Naval officer who was victorious in the Battle of the Saintes in 1782, which ended the French threat to Jamaica and asserted British predominance in the Caribbean thereafter. (Given that he was “vain, selfish and unscrupulous” and was often accused of nepotism and having an obsession with prize money, this might strike some as surprising, but never mind – I guess it’s the battle that’s important).

Made from a blend of rums aged eight to twelve years, somewhat navy in character (though not as much as some other darker and more in-your-face rums that tout the fact front and center), Admiral Rodney rum is aged in oak casks once used for bourbon, and unchill filtered (always a good thing). The Admiral presented himself in a round shouldered square bottle with a cool wooden-tipped cork as big as W.C Fields’s nose (though not as red). What distinguished the dark amber rum inside was its overall softness. A gentle, warm and light-smoky nose redolent of light flowers, orange peel and vanilla wafted up from the glass, and I was pleased to be able to pick up cinnamon, coriander and mild caramel notes, without any of them actually dominating the other. Usually in lesser offerings, the burnt sugar and butterscotch-caramel flavours dominate and let you know in no uncertain terms that here is a man’s rum (or so they believe)…this one was serenely confident in its own rum-ness, and disdained such crass embellishment. 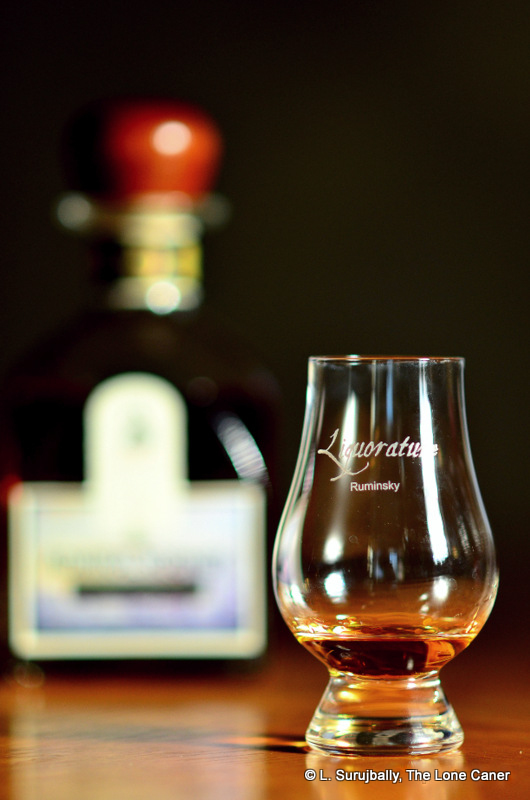 I liked the taste and mouthfeel as well. It was a little heavier than medium, and a shade more spicy than the 1931 bottled at 43% and about the same as the 46% Renegade St Lucia 1999. Which I must admit, is odd for a forty percenter. Still, once it settled down it evinced notes of honey and mild tropical fruit – papaya, guavas, ripe mangos – and gradually turned a shade dry. It was on balance sweeter and richer than the Forgotten Casks, and quite smooth, with the taste of burnt brown sugar and caramel being quite muted. It was, when I thought about it, remarkably unaggressive, and seemed to aim for some of the let’s-please-everyone nature of a Honda Civic (which is both a good and a bad thing). The medium long finish reminded me of a decent wine, something like a pinot grigot, or a chenin blanc, with closing tastes of those same soft fruits, and white flowers on the exit. All in all, a very pleasant sipping rum with very little attitude or aggro.

What’s this rum good for? Well, as a sipping spirit in its own right, I think it’s not shabby at all. Great bouquet, good palate and finish, excellent on many levels. As the Forgotten Casks rum was, it’s a better than decent introduction to sipping rums for those on a budget (I paid around sixty bucks for it), and its overall softness makes the intro a gentle one instead of something more elemental that rapes your gullet. It may not convince a whisky drinker to take the plunge into the dark side, but a wine dabbler? Oh yes.