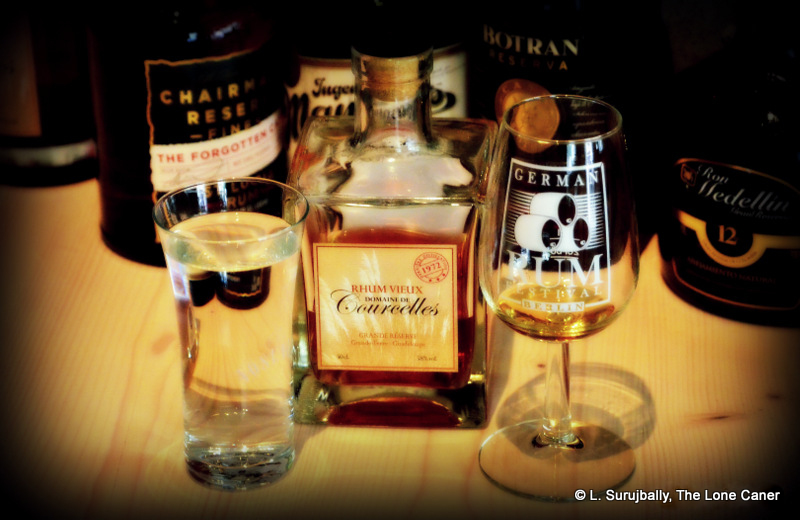 I’m not an avowed fanboy of agricoles: yet this one may be the best I’ve ever tried, and certainly among the top tier of rums made anywhere, by any method. Rare, old, powerful, excellent, pricey and, well … yeah it’s worth it.

Holy sweet mother of God, where has this rum been sitting? A snarling, awesome 58% beefcake of an agricole (I have my suspicions about this, see below), aged 37 years and one of the best of its kind I’ve ever tasted. This is where I get up on my soapbox and demand that rum makers start going stronger, higher, more powerful, and move off from the self-imposed limit of 40% ABV. Just tasting this one would tell you how much more intense everything is when you dial it up a few notches.

On my last day in Berlin in August 2012, I popped over to the Rum Depot and asked for whatever they had that was old, unique and preferably rare (this was on top of the eight rums I had already bought that were exceptional in their own way and unavailable in Canada). The co-manager (whose name I have regrettably not written down and have now forgotten, my apologies to the gentleman) trotted out this 500ml bottle from Guadeloupe from his personal stash, and purely on the strength of the tasting, I immediately bought the 47% version, which is the same age, but packing a shade less oomph in its trousers.

The Rhum Vieux Domaine de Courcelles Grande Reserve was distilled in 1972 on the French Caribbean island of Guadeloupe (home of Karukera) and bottled in 2009, and let me tell you, it’s phenomenal. It did not have any AOC or terroire marked on the bottle – Guadeloupe has never been quite as intense as Martinique in getting the designation – but frankly, after a careful nosing and even more careful sip (or four), I didn’t give a damn. The amazingly strong (yet soft) nose billowed out at me without fuss or complaint, as assertive and friendly as an insistent St. Bernard coming to you over the snow to provide a well-needed dram. Scents of cinnamon, marzipan, breakfast spices and brown sugar melting in the tropical heat argued genteelly for attention, none dominant, none rough, none out of balance with any other. Indeed, I spent an inordinate amount of time simply nosing the thing, and even among all the other tastings I did that day, this was the one to which I continually returned. 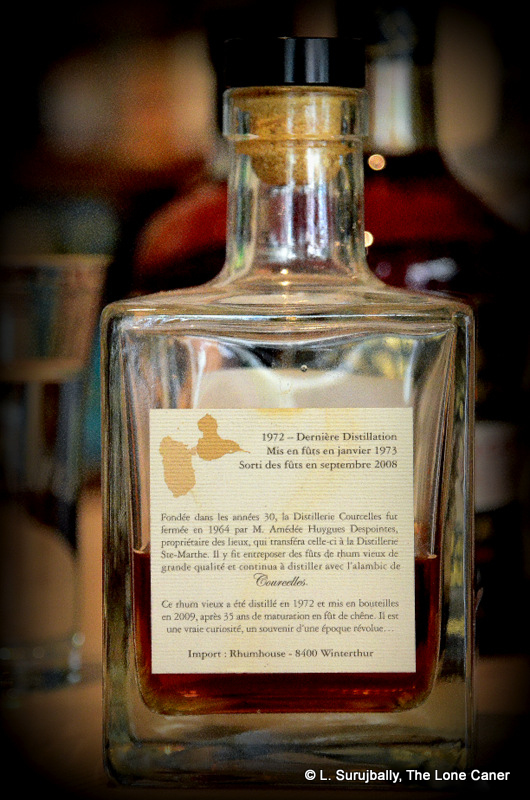 All these scents and more carried over to the palate of the medium bodied, straw-coloured rum. The marzipan almost mischievously flirted with turning into a minty flavor (but not quite, otherwise I might have been sourly muttering about toothpaste the way my Dad, the Hippie or the Maltmonster would), the cinnamon added nutmeg, brown sugar, honey and floral notes and for a 58% strength rum, the Grande Reserve was unbelievably deep and even a bit smooth – not without a little sting, mind, yet not raw or uncouth, not the bitchy scratch of rum-claws that made you hunt for your tonsils in Albania, more like the dark heat of strong, well-brewed tea. To call it glorious is to undersell it. It barks. It gurgles. It snarls. It loves you. It makes you shake your head and smile and thank whoever it was for inventing rums because this, by God, is what a rum should taste like. And the finish was nothing short of exceptional – long, lasting and mellow, with closing notes of warm ground after a fresh rain, a shade dry and with a last exclamation point of leather and pipe tobacco.

The Courcelles distillery in Grande Terre (one of the two “wings” of Guadeloupe island) which was established in the 1930s when rum was in its heydey, closed way back in 1964 when the then owner, M. Despointes, transferred the inventory and equipment to another distillery, that of Ste Marthe. They continued using Courcelles’s pot still and distilled this rum in 1972 as noted above. What a shame there is so little of it to go around. Note my suspicion that this is not an agricole: even taking into account the pot still origin, it seems a little too heavy and flavourful to come from cane juice, and since Guadeloupe has a history of using rather more molasses than juice to make rum (unlike Martinique where the opposite is true), I feel my take is reasonable…feel free to point me right if you have evidence the the contrary, though.

Premium or true vintage rums are a secondary enterprise for those who make them. Rums live and die at the mid-range and low-end, places and price-points that have never been welcoming to either old-timers or eccentrics. The hoi-polloi sneer at the past and don’t bother about the future, aimlessly seeking pleasure only in the amorphous now. Great and well-known legends in other genres have an easier go of it (like whiskies do), and gradually some older rums are finally getting their due. But no matter how reviewers like me flog the alternative, aged, unusual stuff, we know in our hearts that they will always represent a niche market, and be unappreciated by most – and if you doubt me, look no further than dusty Renegade rums gathering spiders webs of neglect in the liquor stores of Alberta.

A rum like this shows up the weakness of that one-size fits all mentality, because if you think about it, rums made for “everybody” (and which sell by the truckload precisely because of that) are actually made for nobody in particular. On the other hand, rums about specific styles, with a complex palate done to exacting standards, with great blending, great artistry and (dare I say it?) great love … these are magical; they make no attempt to seduce us; they are serenely, happily themselves. When you try the Rhum Vieux Domaine de Courcelles Grande Reserve 58% with its amazing profile, you’ll understand why it’s important we should agitate for more of such exceptionalism, even if it is just for the few remaining barrels of some long-defunct distillery that none but us rum lovers now recall.