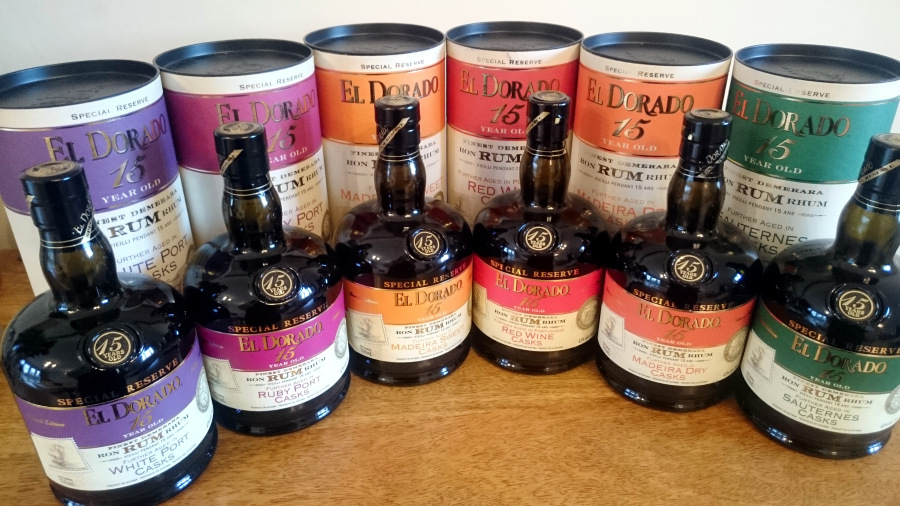 Over the years, there has developed a sort of clear understanding of what the El Dorado 15 YO is, deriving from the wooden stills that make up its core profile – that tastes are well known, consistently made and the rum is famed for that specific reason. Therefore, the reasoning for expanding the range in 2016 to include a series of finished versions of the 15YO remains unclear.  DDL may have felt they might capitalize on the fashion to have multiple finishes of beloved rums, or dipping their toes into the waters already colonized by others with double or multiple maturations. On the other hand, maybe they just had a bunch of Portuguese wine barrels kicking around gathering dust and wanted to use them for something more than decorations and carved chairs.

Few people – including us scriveners –  will ever have the opportunity or desire to try the entire Finished line of rums together, unless they are those who attend DDL’s marketing seminars, go to Diamond in Guyana, belong to a rum collective, have deep pockets or see these things at a rum festival.  The price point makes buying them simply unfeasible, and indeed, only two writers have ever taken them apart in toto – the boys in Quebec, and the Rum Shop Boy (their words are an excellent supplement to what I’ve done here).

Here are the results in brief (somewhat more detail is in the linked reviews):

Lightly sweet with licorice, toffee and fruity notes on the nose. Cherries, plums, raisins and watermelon on the palate, all staying quiet and being rather dominated by salt caramel and molasses.

Opens with acetones and light medicinal aromas, then develops into a dry nose redolent of peanut butter, salt caramel, fruits, raisins, breakfast spices and some brine. The taste was rather watery – pears, watermelons, caramel, toffee, anise and cognac filled chocolates.

Marginally my favourite overall: noses relatively darker and richer and fruitier than just about all the others except the “Dry” – delicate nose of peaches, raisins, cinnamon, cloves, caramel, peanut butter, cherries in syrup, candied oranges, bitter chocolate. Soft palate, quite dry, oak is more forward here, plus raisins, cloves and cinnamon carrying on from the nose, and the fruitiness of peaches in syrup, cherries, plus toffee, salt caramel.

Subtly different from the others. Nose of aromatic tobacco, white almond-stuffed chocolate and nail polish, then retreats to salty caramel, molasses, vanilla, cherries, raisins, lemon peel and oak, quite a bit of oak, all rather sere. Palate retains the  tobacco, then vanilla, chocolate, coffee, molasses and quite a bit more dried dark fruit notes of raisins, plums, dates, and a quick hint of anise. The oak is quite noticeable, and the rum as a whole is quite dry.

Unsurprisingly, there are variations among those who’ve looked at them, and everyone will have favourites and less-liked ones among these rums — I liked the Sweet Madeira the best, while one Facebook commentator loved the Ruby Port, Simon much preferred the White Port Finish and Les Quebecois put their money on the Dry Madeira.  This variation makes it a success, I’d say, because there’s something to please most palates.

The Finished range of rums also make a pleasing counterpoint to the “Basic” El Dorado 15 Year Old…something for everyone.  But taken as a whole, I wonder – my overall impression is that the woodsy, musky, dark profile of the Port Mourant double wooden pot still, which is the dominant element of the ED 15, is affected — but not entirely enhanced — by the addition of sprightly, light wine finishes: the two are disparate enough to make the marriage an uneasy one.  That it works at all is a testament to the master blender’s skill, and some judicious and gentler-than-usual additions to smoothen things out – the Standard ED-15 clocks in at around 20 g/L of additives (caramel or sugar), but these are substantially less. Which is a good thing – it proves, as if it ever needed to be proved at all, that DDL can forego sweetening or caramel additions after the fact, with no concomitant loss of quality or custom (why do I have the feeling they’re watching Foursquare’s double matured Exceptional Cask series like a hawk?).

What the series does make clear is that DDL is both courageous enough to try something new (the finishing concept), while at the same time remaining conservative (or nervous?) enough to maintain the continuing (if minimal) addition of adulterants. DDL of course never told anyone how popular the Finished Series are, or how the sales went, or even if the principle will remain in force for many years.  Perhaps it was successful enough for them, in early 2018, to issue the 12 year old rum with a similar series of finishes.

All the preceding remarks sum up my own appreciation for and problems with the range. None of them eclipse the 15 year old standard model (to me – that is entirely a personal opinion); they coexist, but uneasily. There are too many of them, which confuses – it’s hard to put your money on any one of them when there are six to chose from (“the paradox of choice”, it’s called).  Their exclusivity is not a given since the outturn is unknown. The unnecessary dosage, however minimal, remains. And that price! In what universe do rums that don’t differ that much from their better known brother, and are merely labelled but not proved to be “Limited,” have an asking of price of more than twice as much?  That alone makes them a tough sell. (Note – the 12 year old Finished editions which emerged in 2018 without any real fanfare, also had prices that were simply unconscionable for what they were). The people who buy rums at that kind of price know their countries, estates and stills and don’t muck around with cheap plonk or standard proofed rums. They may have money to burn — but with that comes experience because wasteage of cash on substandard rums is not part of their programme.  They are unlikely to buy these. The people who will fork out for the Finished series (one or all) are those who want a once-in-a-while special purchase… but that doesn’t exactly guarantee a rabid fanbase of Foursquare-level we’ll-buy-them-blind crazies, now, does it?

My personal opinion is that what El Dorado should have done is issue them as a truly limited series of numbered bottles, stated as 16-17 years old instead of the standard 15, and a few proof points higher.  Had they done that, these things might have become true collector’s items, the way the 1997 single still editions have become. In linking the rums to the core 15 year old while making them no stronger, not explosively more special, and at that price, they may have diluted the 15YO brand to no great effect and even limited their sales.  But at least the rums themselves aren’t crash-and-burn failures, and are pretty good in their own way. We have to give them points for that.