A recent post on the reddit rum forum – perhaps the only real Q&A alternative to FB rum clubs on the net – remarked on the discovery by one person of Japanese rum, using the Ryoma 7 year old as an example. Having written about that particular product – I thought it an interesting essay in the craft, having a profile both similar to and at odds with, more traditional rums with which we are more familiar — I remembered this other one by Ogasawara which I bought in Paris last year, and decided to jump it to the front of the queue.

I have to confess that the initial sensations on the nose were absolutely not my cup of tea (my notes read “shudderingly weird”), right up to the point where through some magical transformation the whole thing did an ugly duckling on me and (somewhat amazingly, from my perspective), turned into quite a credible swan. It started off with light oil and petrol, and was really briny, like a martini with five olives in it, leaving me wondering whether it was a pot still product (I never did find out). In its own way it seemed to channel a cachaca, or unaged juice straight from the still, except that it was too unbalanced for that. There was white pepper, masala, sugar water, cinnamon, a flirt of watermelon and pears, and a bouillon with too many maggi-cubes (I’m not making this up, honestly). Somehow, don’t ask me how, after ten minutes or so, it actually worked, though it’ll never be my favourite white rum to smell. 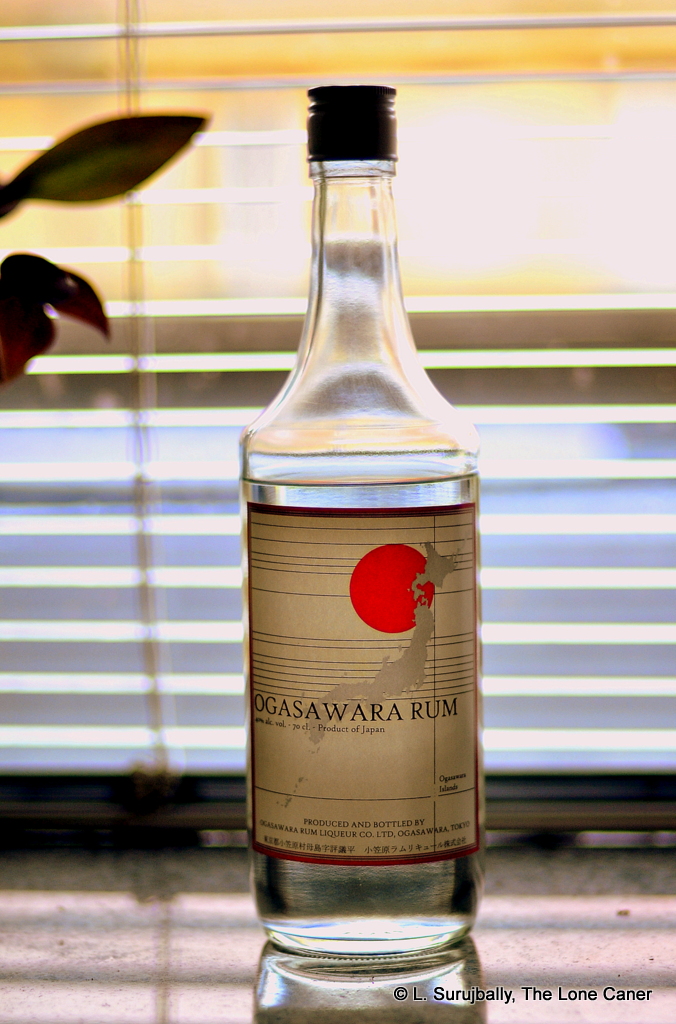 Fortunately the Ogasawara settled down and got down to rum business on the palate, which was very pleasant to taste. The 40% helped here, lending a sort of gentling down of the experience. It presented as reasonably warm and smooth, the salt disappeared, leaving a light and sweet sugar water and watermelon tastes flavoured with cardamom, mint and dill, with traces of vanilla and caramel. Water brought out more – very brief and very faint notes of olives, fusel oil and delicate flowers which gave some much-needed balance and character to the experience. Although it was a molasses based product, it seemed to channel elements of an agricole spirit as well, in an interesting amalgam of both — something like a Guadeloupe white rhum, just not as good. But if one were looking for a true molasses rum redolent of the Caribbean, forget it – that wasn’t happening here: it was too individual for that. The finish was probably the weakest point of the whole affair, here one moment, gone the next, warm, light, clear, but hardly remarkable aside from a quick taste of cinnamon, cardamom, and sweet rice pudding.

The Ogasawara islands are also known as the Bonin (or “uninhabited”) Islands and are part of an archipelago of that name. The first Europeans are said to have come in in 1543 (supposedly a Spanish explorer, Bernardo de la Torre); one of the islands, Hahajima was originally called Coffin Island or Hillsborough Island and settled by a few Americans and Europeans and other pacific islanders around 1830. One of them, an American called Nathaniel Savory, traded bathtub-style hooch (I suppose they could be called rums) made from locally planted cane with whaling ships. By 1880 they became administratively a part of the Tokyo prefecture, and the commercial cultivation of sugar cane and sugar manufacture dates from this period. Rice based alcohols are of course a tradition in Japan but rums in the modern sense of the word have only existed since 1940 or so – however, most are classified as shochu for tax reasons (rum is taxed more heavily). Placed under American control after the end of World War II, the Islands returned to Japan in 1968, and after many years of efforts to reinvigorate the culture of sugar cane which existed on the island before, Ogasawara Rum Liqueur Company was founded and its first put rum on sale in 1992. They still don’t produce much of a range.

Not much info on the rum itself is available. I was informed via a Japanese friend of mine that it’s double-distilled in a stainless steel pot still. There are stories about how it was aged for under a year on the sea bed by the source islands, but I’m not clear whether it’s this rum, or a rum made on Ogasawara and where the title is used as an adjective. Plus, if it was aged that way, it had to have been filtered, again without confirmation of any kind. So this turned into one of those occasions where I really did taste it blind, and what you’re getting is an unvarnished opinion of a rum about which very little is known aside from strength and basic source.

As a person who has had rums from all over the world, I am a firm believer that terroire and culture both impact on the rums various regions make, which is why you’ll never confuse a Bajan with a Jamaican, or either with a Martinique rhum, for example (or with a Guyanese wooden still product). Japan’s small and venerable producers, to my mind, benefit from their unique Okinawan cane (much as Dzama rhums on Madagascar do with theirs) as well as being somewhat limited by their predilection for sake and shochu, which are quite different from western spirits and impart their own taste profiles that define and please local palates.

Given its vibrant whiskey industry and lack of attention to our tipple of choice, it’s clear Japan still has some catching up to do if it wants to make a splash and win real acceptance in the wider rum world as a producer of a unique variant of rum. Nine Leaves is already making strides in this direction, and it remains to be seen whether other small (or large) producers will edge into the market as well. If they do, it’s going to be interesting to see how they approach the making of their rums, the marketing, and the disclosure.