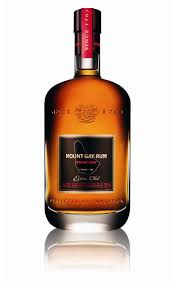 You’re not looking at two images here by accident: both of these are Extra Old. The one on the right is the new design, and what I bought was the one on the left. There’s some confusion in the literature as to what you’re getting: the one on the right is supposedly 15 year old blends, while the one on the left is stated on some websites to be 7, 8 and 10 years old blended together…what the hell? However, after having contacted Mount Gay’s customer service (in France, because Rémy Cointreau has owned the brand since 1989), I can now tell you that both blends are exactly the same – a combination of 8-15 year old rums – and the bottle on the right is merely a newer, more “premium” design, which is in line with my observation that rums are now moving upscale in both blending and design (see the [e]8 review if you doubt me).

Mount Gay is the rum from Barbados that essentially – after tourism, I guess – makes the island’s name. Not everyone has heard of Doorly’s, or Mahiki’s or St. Nicholas Abbey, and though Cockspur is pretty familiar to any West Indian (it’s had sniggering rights for decades) it’s not so well known outside the Islands: but you’d be hard pressed to find someone who hasn’t at least heard of Mount Gay. It is the Bacardi of Barbados, you could say.

Maltmonster made the remark the other day that he likes to do his tasting in vertical rankings, because you get a better idea how the rums (well, he said whiskies, but I chose to think he misspoke himself in an unfortunate faux pas which he now sincerely regrets and will one day beg my forgiveness for) improve or develop as one goes up the price chain. The problem with that admittedly laudable theory here in Cowtown, is that while well-suited for the elephantine selection of single malts one can find in even the meanest mon-and-pop establishment, it utterly fails for the anorexic pickings of the cane around here. One is therefore left with the dubious methodology of simply comparing rums on age and price and hoping you can draw some reasonable conclusions from that.

Anyway. The oldest continuously operating commercial distillery in the western hemisphere is not in Scotland, it’s not in the American continents – it is this one, and it has the papers to prove it: in fact, legend has it that Mount Gay was distilling rum since the mid 1600s, which would bring it in a shade behind Bushmills, in Ireland (so look it up). The signature of their lines is banana and almond, the way citrus is for Appleton, and the premium offering is the Mount Gay 1703 Old Cask: what we had for the July 2010 selection was a few rungs lower – the Extra Old, a mixture of rums eight to fifteen years old (a note here: the kind of the bottle I review is the picture on he left: this is gradually being replaced with the sleeker new design on the right).

On the nose it’s caramel candy, with that taste of banana. A bit strong, burning gently but not offensively. Swirling in the glass shows the thin legs of a model from Milan, but nothing special to my mind (I don’t attribute much to the legs unless they are really running off the reservation). On the palate, this supposedly premium sipping rum does not, unfortunately, impress: while it shows off a medium brown colour, tastes of the usual molasses and brown sugar, and hints of pecan, the blend is somehow not assertive, not intriguingly complex…it is, to but it bluntly, a tad bland. Behind, stiffening it up, is the aforementioned banana and a slight note of citrus that almost disappears in the mouth. The finish, I’m gonna have to tell you straight out, is short and bitchy and bitter, like a Reno divorce, and about as pleasant. I kind of just looked at the glass on my second go ’round with it. What just happened to this thing? Did they not try to tone down the woodiness imparted by the Jack Daniels barrels, in some misguided effort to give it street cred?

No matter what my personal feelings about the Bajans (and my disappointing experience with the Doorly’s XO should have been a shot across the bows), I had really gone in prepared to like this one. Hell, I forked over sixty-plus bucks for the bottle, can you blame me for expecting more? Extra Old rum of any kind has this cachet of age and care and love about it – online reviews are almost uniformly positive and fawn over the rum as if it could hold them till the Rapture – and while I had wanted to stroke Mount Gay like a favourite cat, you’d think my prior encounters with other pretentiously named XOs would have educated me out of this delusion: as it turned out, I had forgotten my lesson, and simply got scratched for my trouble.

So it fails as a sipper for sure, in my opinion. It’s okay – nay, excellent – as a mixer and a cocktail base, but then, if I wanted okay and a mere ingredient for fancy-named drinks, I could have gone with the Coruba, and not blown my budget for the week with this thing.

I think one day I’ll fork out three figures for the 1703 Cask edition from Mount Gay, if some kind purchasing agent for a liquor shop ever gets around to bringing it over to this city of malts: by that time, I’m just hoping that I’ll have put this rather disappointing experience behind me, so I don’t treat the premium offering of a four hundred year old distillery with the same sort of indifference that this slightly less exalted bottle treated me.