First posted 2nd November 2010 on Liquorature. For an update, naming this rum one of the Key Rums of the World, see this 2018 review here.

My trip to Toronto last October permitted me to taste rums that never would have made it to Calgary (one or two would never have made it anywhere), and since my circle of friends is admittedly small, and few of those travel to rum producing states, it’s not as if I would have gotten any of the last five subjects of my reviews from them either.  So kudos and thanks one last time to John, who opened his cabinet to my inquiring snoot, and let’s get to the review of the last rum in this decidedly odd series.

Rivers Royale is from the Spice Island, as is the Clarke’s Court, though River Antoine Estate Distillery is in Saint Andrew’s Parish on the Northeast coast of Grenada, while Clarke’s is from the south…apparently there is healthy competition for bragging rights on the island as to which is stronger (both are white overproofs), or simply better. Because I had the “bush” variation of the Clarke’s (which was, by the way, quite good), and because Antoine’s white lightning has a surpisingly robust flavor profile for an overproof, I’m not going to get in the middle of that particular dispute except to make this observation: Rivers is made the same way as it was way back in 1785 when the place was founded.

On the smaller islands like Grenada, commercial cane production is a thing of the past (partly this is a space issue, partly it’s the economics of world sugar trade), and most distilleries import molasses or raw rum stock from other places with more space available for economical cane cultivation (like Guyana)…except for River Antoine. These local lads don’t muck about.  They cultivate their own cane, reap it, process it and make the rum like they always made it, crushing the cane with a press whose motive power is drawn from an old waterwheel, concentrating the juice in open vats (John, who’s been there, noted rather sourly that it’s not impossible for bat guano to be a part of the mix, but I digress) then boiling it down in cast iron pots over an open fire fed by the cane remnants. 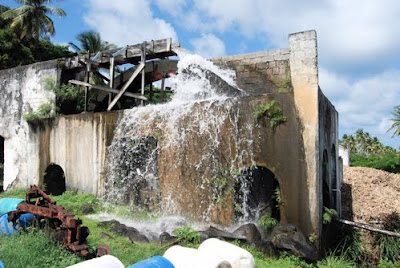 After fermentation, the resultant is distilled in an ancient copper pot still (copper supposedly imparts better (and subtler) flavours to the distillate than stainless steel)…the entire process takes abut ten days from cane to finished product.

It’s perhaps the only remaining distillery in the Caribbean that can make the boast of using such old fashioned technology, and it’s quite a tourist draw. What you get if you go to the estate-cum-distillery in person (and at factory prices, apparently) is the local version, bottled straight out of the still, at about 75-80% alcohol (stories vary), which is to say 150-160 degrees proof. I won’t swear to it, but I think John had the real McCoy, not the watered down version sold to western homeys so they can get through customs, and I say that because it was an overproof for sure, complete with the deep burn and raw sting of real moonshine…though I gotta tell you, surprisingly robust flavours came through.

The clear liquor I tasted that night had a medium body, with middling legs in my glass. The claws struck at my nose without hesitation, but after my eyes stopped watering and I rolled my medium rare tongue back off the floor, what I got was a rather welcome waft of…well, schnapps. A slightly floral hint.  Salt, brine, olives. As I’ve noted before, I don’t spend too much time trying to taste test an overproof, neat or otherwise, because the spirit burns out anything I might think I’m tasting (or which my imagination conjures up for me as my stomach ties itself up in complex knots and I try to turn myself inside out): on the other hand, I have to say that I don’t know what they did down there in Granada, but if you stick with Rivers Royale, you will taste cherries, fruit, maybe some orange peel.  Quite amazing.  And as for the finish, well, come on…who’re you kidding?  On an overproof?  It’s a potent likker with real power behind dem claws, and it sears deeply, and farts acid, but not in a way that makes you scream: it sure ain’ smooth like a more commercial rum, and that’s the best I can do for you.

There’s something about the overall interaction of all elements of this overproof that works for me, though. I liked the hand drawn, unpretentious label.  I liked the title itself, that air of old time creole French, and the old-fashioned way it was made. I liked the rum. It’s potent likker, and will singe your throat (and eyebrows if you’re not careful). It’s absolutely an island product and I don’t care what anyone says, for me it’s not really a true commercial export product that will one day show up in Calgary (import, strength and quality regulations probably won’t allow it) – I consider it one of those backwoods bashwars you’ll find as you tour the Caribbean, locally made and locally consumed, unpretentious and not giving a damn, rude and cheerful and unsophisticated, and quite simply, one of the best rums you’ve ever tried…one those rums you’ll be happy you’ve had once you’ve had it and will remember with a smile forever.