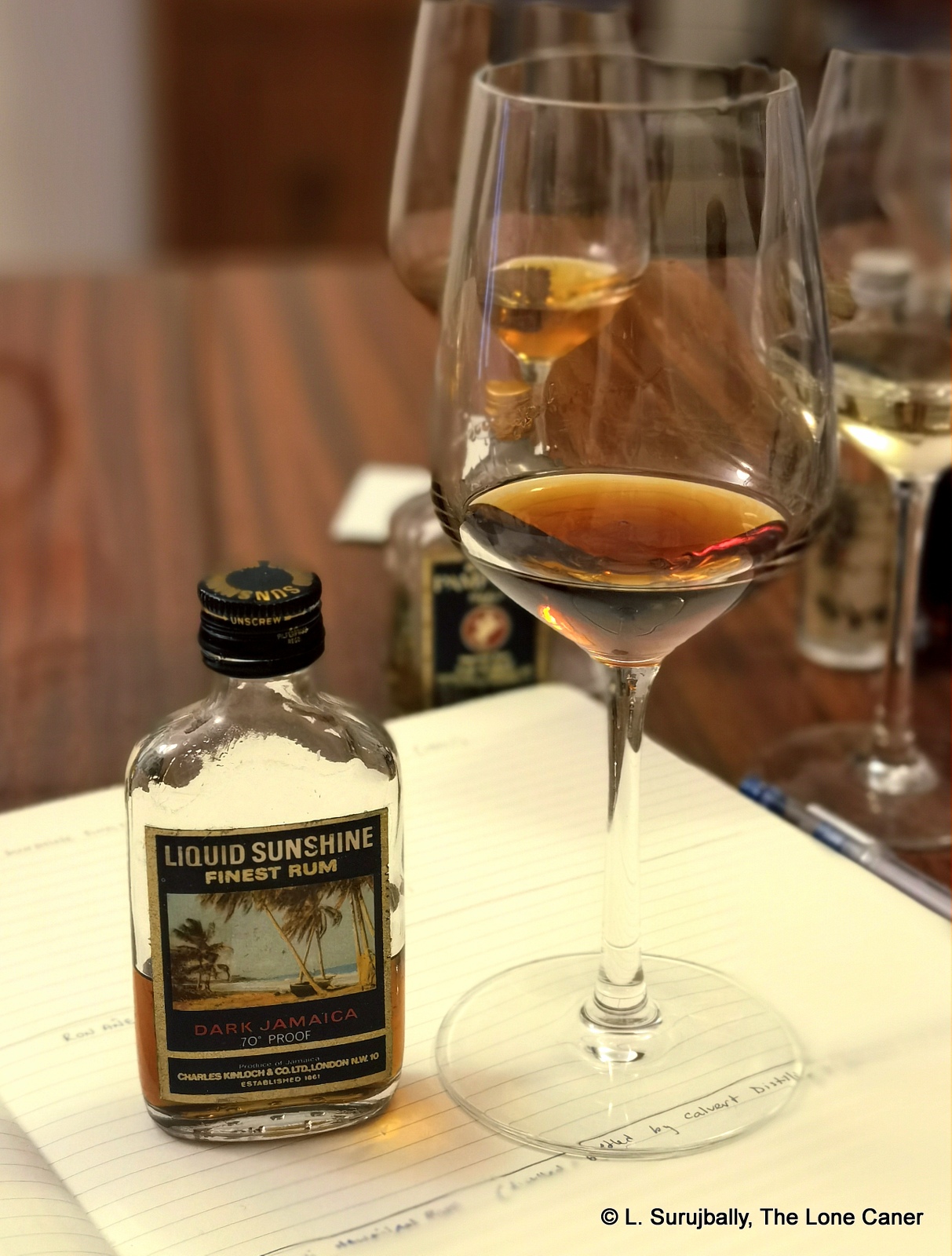 It is becoming a working theory of mine that the heydey of the merchant bottlers and their near-ubiquitous minis of rum must have been in the 1960s and 1970s, bleeding over into the 1980s. Granted this may be because the majority of such rums I find stem from that period, I just don’t think it’s all a coincidence. Air travel and tropical drinks was a thing, hotels had well-loaded minibars, cruise lines stocked them everywhere and while I’ve never found that many merchant-bottler “indie” minis from pre-1960s or post-1990s, the auction sites are rife with little bottles from the era before the oil shocks and mass commercialization changed tourism.  Nowadays wherever you go the small bottles are all global (or hyper-local) brands, not small outfits doing their own thing.

As to this rum, it’s from an unidentified distillery in Jamaica. That is not surprising, since it’s only recently that estates’ names became a selling point, once they began branding their own rums.  But in the seventies it was all bulk rum and merchant sales and nobody cared about stills or estates of origin, merely that it was “Jamaican” (with perhaps only J. Wray / Appleton bucking this trend). The 70º Proof dates it to the pre-metric pre-1980s era.  Beyond that, not a lot more, unfortunately. 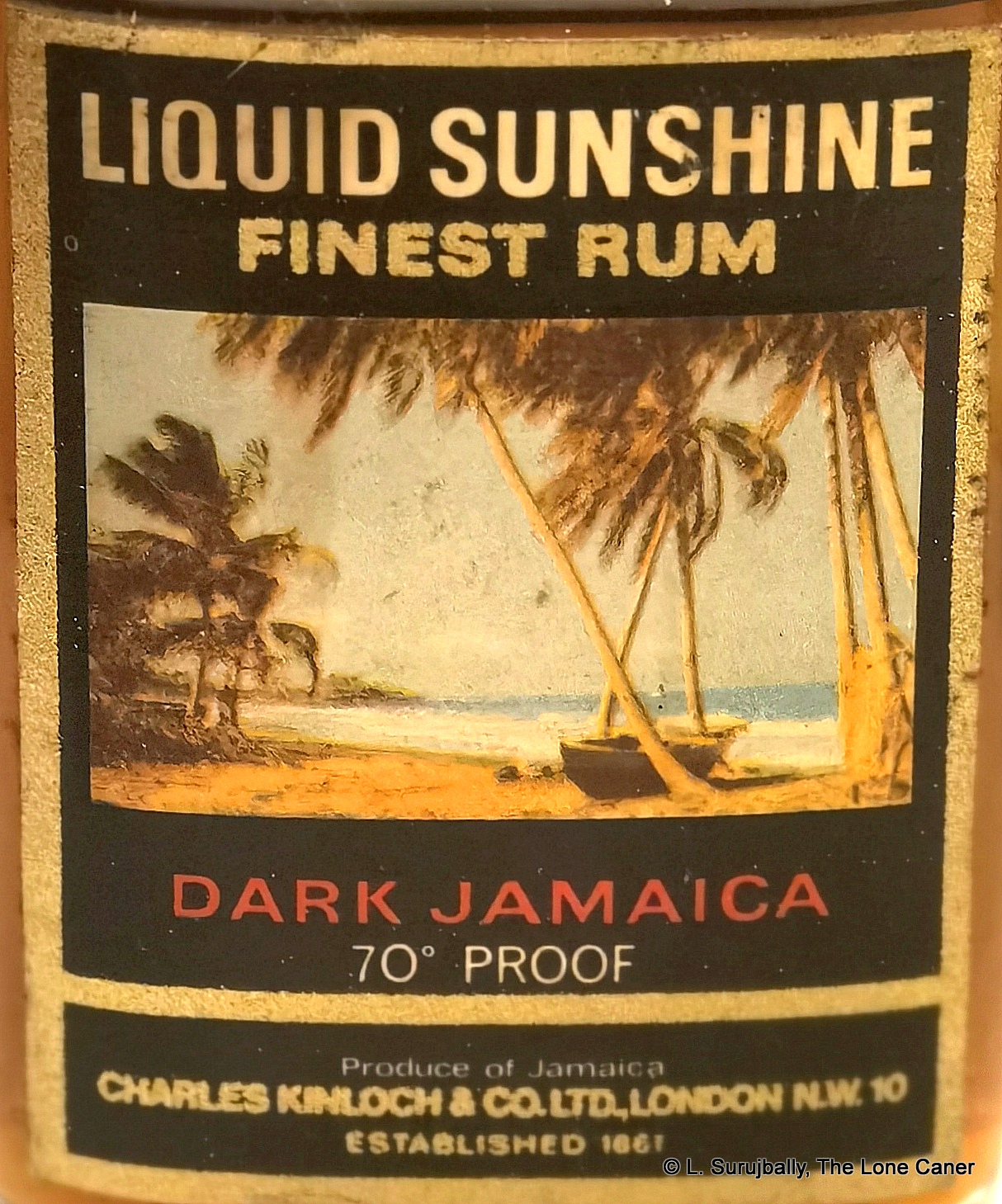 Nose – Hunh?  This is Jamaican?  Doesn’t really smell like it.  Burnt brown sugar, molasses, plums and raisins.  It’s rich and fruity for 40%, feels dusted with a little vanilla, so likely some ageing and a lot of colouring.  An interesting point is the almost total absence of what we would term funk nowadays – the bright, spicy, fruity notes that denote a spruced-up level of congeners.

Thoughts – Simple and quite effective, yet I can’t shake the feeling it trends towards a Demerara. Perhaps it is and Appleton blend of some kind.  Be that as it may, it’s really nice and I happily had a few more glasses that day.

Charles Kinloch & Son were wine and spirits merchants who were in existence since 1861, and formally incorporated as a company in 1891. They eventually joined the Courage Brewery group in 1957 – the Kinloch brand was retained, and they issued several rums from Barbados, Guiana and Jamaica (or blends thereof). Courage itself had been around since 1757 and after many mergers and acquisitions was taken over by the Imperial Tobacco Group in 1972, eventually passing to the Foster’s Group in 1990. In 1995 Scottish & Newcastle bought Courage from Foster’s and it changed hands again in 2007 when Wells & Young’s Brewing company bought all the brands under that umbrella.  By then Navy Neaters had long been out of production, Kinloch was all but forgotten and the company was formally dissolved in 2008 after having been dormant for decades. The current holding company of the Courage brand name is now is more involved in pubs and beers in the UK than in rums of any kind. (As an aside, Kinloch’s building at 84 Back Church Lane E1 1LX, complete with a sign, is still visible on Google Maps’s street view – it was converted to apartments in 1999, but the sign remains).

Note: There is a German wine shop called Schollenberger established in 1996, which created its own line of spirits (starting with gin) and nowadays releases a Charles Kinloch branded blended navy rum, and a Navy Neaters, with a label that has many of the details of the original.  It is unclear whether they acquired the name or are just using it based on the company no longer existing.