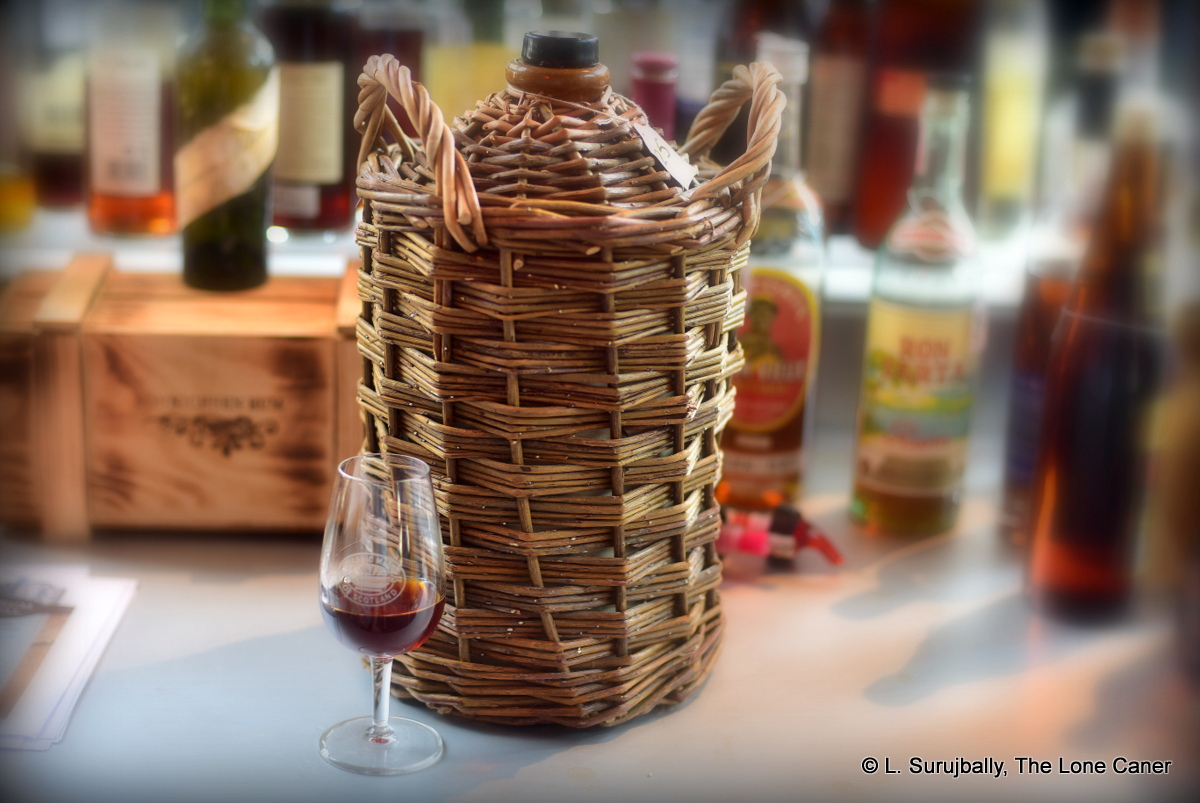 The moniker of Navy Rum is one of the most recognized rum names on the planet, aided and abetted by Pusser’s supposed recreation of the rum after Black Tot Day.  The Black Tot Rum (the old one retailing for a thousand bucks, not the new recreation just released in 2019) certainly helped, and over the years, we have seen the odd old decanter or jug or bottle or what have you, go on sale (the UK government was the seller) – some were actual flagons of Navy stocks that had been left over after 1970s, unlabelled, and found their way into the hands of collectors – this is one such.

This small write up is based on a flagon of Navy Rum bought by Rene Van Hoven in Germany. He has dated it to around 1954 and it’s rated at about 55% ABV, and this is one of those times we’re going to have to take it on faith that he has the backup paperwork to substantiate what he told me. Note that it’s possible that it’s from the same stocks as were bonded in Germany, and which Wes Burgin wrote about in 2016, here.

Nose – This is a PM or Versailles distillate right up front – perhaps not a majority but certainly a good part of the blend. Molasses, pencil shavings, cedar, sawdust, glue, anise, rubber.  It’s very warm and completely solid, but not sharp, eminently drinkable (which may have been the point). Brown sugar, acetones, furniture polish follow, underlain by a sort of rotting fruit note, mixed in with a damp forest and moldy moss-covered logs, tar, burnt sugar, ashes and coffee.  It’s pungent, dusty, musty and quite powerful to nose. There’s a mustiness and dry cereal nuttiness (plus a smorgasbord of dark fruits) to it all, and that elevates this rum, I think, adding a layer of complexity and edge.

Palate – If there’s any Jamaican or Trini here, it’s in the bright fruity notes and the tar and petrol, and they’re all blatted flat by molasses, cedar, sawdust, cereal, nuts and enough pencil shavings to cover Babe the Blue Ox.  Behind that is concentrated black cake like Tanti used to make, with bags of raisins, rum-soaked chopped fruits, prunes, salted caramel, syrup, rich cherries, and plums. There are still some acetones and nail polish and glue and rotting fruit here, but they are like counterpoint, bringing up the rear and don’t distract, just add to the pungency.

Finish – Long, pungent and aromatic. A last flirt of the pencil, molasses, coffee, bitter chocolate and of course the prunes and raisins and caramel ice cream sprinkled with nuts

Thoughts – It reminds me a lot of the overproofed 1970s Lemon Hart Demerara Rum I tried a few days earlier. That said, I don’t know if they simply made blends in different proportions back in the day, or whether the progression to rums today has changed the underlying distillate in some fashion.  All I know is that like the Harewood House 1780 rum, it’s spectacular and remarkably modern. The profile is dense and rich and pungent and were you to taste it blind, you’d think it was made by an old rum house, just last year. It’s one of the tastiest rums I’ve had in ages.