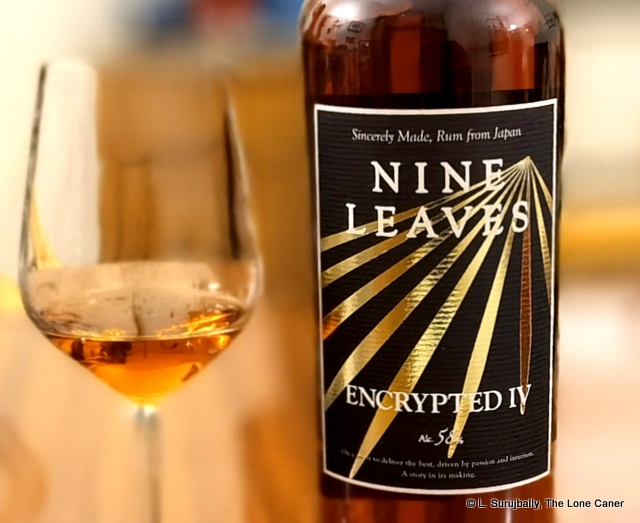 The world shut down for the better part of two years and it’s been almost three since I’ve seen a Nine Leaves rum, but the little one-man Japanese distillery I have written about with such affection since 2014 has continued chugging along, releasing its young rums every six months to a year and somehow managing to make rent.  Several festivals ago I remember Yoshiharu Takeuchi (the owner) telling me that because tax laws in Japan were so obscure, it was not worth his time to age for more than two years – and indeed, many of his initial releases were a mere six months old.  That they retained real quality and became popular and sought after is a testament to his skill as a distiller and as time went on he upped his ageing to two years, with occasional one-offs exported at slightly older.

Something clearly changed in the intervening years, though, because the latest in the premium line, the Encrypted IV, is a five year old rum, and it’s quite a nifty expression to try, if you can get some.  As before it’s a blend of several different bits and pieces aged in different ways but this time I could not get the details of the blend so it surely does deserve its title.  We know it’s a pot still product issued at 58%, released in 2021 and aged five years, that’s about all…yet within those brief statistics is a rum of real quality.

Let’s start with how it smells. It’s rich, nicely so, yet not too heavy – sweet plum wine, heavy and sulky, giving up its charm, with reluctance. Orange rind (I kept thinking of Cointreau or Pyrat’s), unsweetened high quality chocolate, caramel and molasses, balanced by fresh green tea, apples and green grapes. Some brine and olives, cereals and flowers, and it reminds me of a well done sherry-aged Glendronach at times.

Tasting it reveals a dry, pungently plush rum whose fruitiness bent towards dark: black grapes, plums, prunes, and a blue-and-blackberry slushie. It’s not overly sweet, which allows muskier notes of salt caramel ice cream, vanilla, and molasses to come forward. Plus, oh, some citrus, cloves, polished old leather satchels, a touch of brine.  These all help give it some oomph, but I tell you, this thing is as seriously astringent as my mother-in-law’s sense of humour. It closes with a really nice dark red wine filip – a Bordeaux, perhaps – and finishes dry, fruity, salty, with reminders of miso soup and a good quality sweet soya.

The rum is really quite something: every time I go back to the glass I get a little more, something a little different. It starts off solid but ends up so clear and clean it could almost be an aged agricole. The darker molasses and caramel elements are held back, allowing other aspects of the construction to shine, and this bends the taste away from a mere copy of better-known Caribbean fare, and into its own unique ecosystem. The Encrypted IV never strays too far from real rum roots (I’ve commented before about the way aspects of shochu and awamori sometimes infuse other Japanese rums) yet carves out a niche all its own, and this is to its — and our — benefit.

Yoshi-san is a fun and quirky guy, with a great sense of humour. I’ve known him for many years, met him many times, and he is always looking for new and interesting ways to make his rums, never regressing or backsliding.  Either he stays at one level of quality, or he gets a little better, and loses no skill. Here he has made a rum that is so well assembled, goes down so easy, that we hardly realise how traditional it is underneath…maybe that’s why it’s only afterwards that we respond to it with familiarity. It’s an essay in contrasting yet complementary tastes, with that distinct structure which one always senses with Nine Leaves’ rums. It takes us for a ride and we never know how much we are getting, and in that way it’s like a small but powerful locomotive pulling a helluva long train.