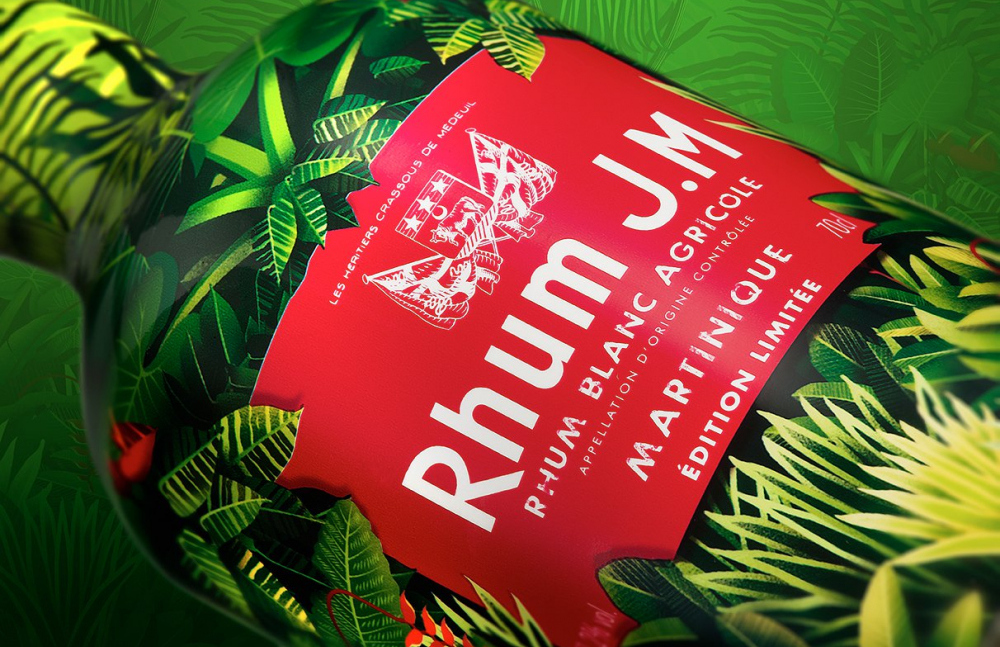 These days I rarely comment any longer on a bottle’s appearance – there was a time when I actually scored it as part of the review, though common sense suggested that it cease after the pointlessness of the practice became self-evident – but here I really must remark on the striking distinctiveness of the design. In colour and form it reminds me of Henri Rousseau’s savagely childish yet iconic jungle scenes. You sure won’t pass this bottle on a shelf if you see it.

But what is it? The Martinique distillery of J.M. is of course not an unknown quantity – I’ve looked at several of their rhums in the past and in “other notes” below I repeat some of their background.  Still, the rhums for which they are known are mostly aged agricoles, many of which are single cask or special editions. Surprisingly enough, this is the first of their whites I’ve taken the time to look at and it is not their regular workhorse blanc issued at 50º but a limited edition at 51.2% – what exactly makes it deserving of a special rollout and naming is somewhat nebulous. It may be something as simple as the distiller and cellar master, Nazair Canatous, coming up with a “blend of cuvées”1 which possessed a powerful set of aromatic profiles. How many bottles make it “limited” is not mentioned anywhere.

Since its introduction, the rhum has been rebranded: the simply-named “Jungle” is the first and only edition of that name, released in 2017 and then replaced the very next year by the retitled “Joyau Macouba” under which it continued to be marketed through to 2021 — but aside from some minor variations in strength, the two seem to be identical. They are also not really expensive, less than €10 pricier than the standard blanc which Excellence Rhum stocks at under thirty euros.

And that makes it, I think, somewhat of a bargain since there are five year old agricoles that cost more and taste less. The nose of the “Jungle” is really lovely – delicately sweet herbal sugar water…with mint and lime juice (not lemon). It displays notes of brine mixed with and soda pop, something like a salty 7-Up. Fruity smells are always hovering around –  passion fruits, tart red currants, fine and faint lemon peel — and there are also some muskier notes of cereals and freshly baked bread lurking in the shadows, and they stay there for the most part.

If I had to chose, I think I’d go for the palate over the nose on this one: it’s just a shade better, richer (usually the reverse is the case).  It tastes like a salty, creamy lemon meringue pie topped with caramel and a clove or two; the core of it is a solidly-sweet, crisp, citrus-y firm taste, with enough of an edge to not make it a cream soda milquetoast. Around that swirl the herbs: thyme, cumin, dill, rosemary and cardamom, plus the grassiness of fresh green tea with touches of mint. Olives and brine kept in the background and always seem to be on the verge of disappearing, but they’re definitely there. This all concludes with a medium long finish that coats the palate without drying it out – sweet, delicately fruity and floral, and with the spices and herbs gradually fading out to nothingness. 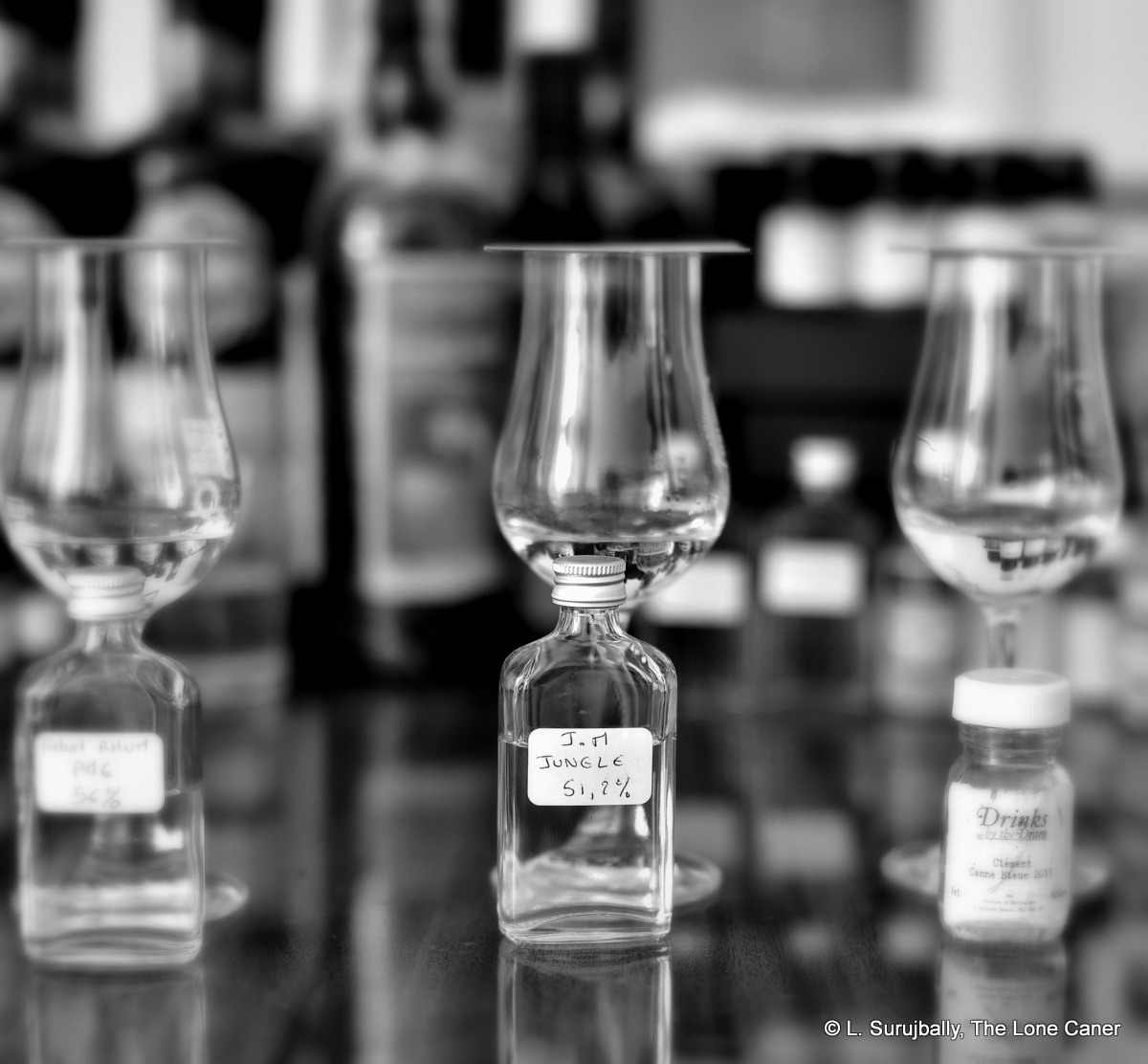 Overall, this is a good white rhum, and I liked it, yet the question remains: what makes it special enough to warrant the limited treatment? The tastes are fine and the overall experience is a little less intense than some of those 50º standards all the agricole makers have as part of their portfolio…perhaps that’s what was considered the point of distinction, since here it was tamed a bit more, while remaining equally complex.

Be that as it may, for a rested-then-blended rhum agricole blanc, it holds up very well.  It is tart, tasty and tamed, and, within its limits, original.  Strictly speaking, there’s absolutely no reason to buy it when there are so many other white agricoles of comparable quality out there (some of which are cheaper).  But you know, we can’t always find relevance, catharsis or world-changing rhums every time we try one, and sometimes it’s simply a relief to find a bit-better-than-average product that eschews extreme sensory overload and simply aims for a little romance, and pleases at a price we can afford. That the “Jungle” manages to achieve that is something we should appreciate when we come across it.

Situated in the north of Martinique in Bellevue, J.M. began life with Pére Labat, who was credited with commercializing and proliferating the sugar industry in the French West Indies during the 18th century.   He operated a sugar refinery at his property on the Roche Rover, and sold the estate to Antoine Leroux-Préville in 1790 – it was then renamed Habitation Fonds-Préville.  In 1845, his daughters sold the property again, this time to a merchant from Saint-Pierre names Jean-Marie Martin.

With the decline in sugar production but with the concomitant rise in sales of distilled spirits, Jean-Marie recognized an opportunity, and built a small distillery on the estate, and switched the focus away from sugar and towards rum, which he aged in oak barrels branded with his initials “JM”.  In 1914 Gustave Crassous de Médeuil bought the plantation from his brother Ernest (I was unable to establish whether Ernest was a descendant or relative of Jean-Marie), and merged it with his already existing estate of Maison Bellevue.  The resulting company has been family owned, and making rhum, ever since and was among the last of the independent single domaine plantations on Martinique until the Groupe Bernard Hayot, a Martinique-based and owned family conglomerate, bought it in 2002. Nowadays it (along with Clement and St. Lucia Distillers) is marketed by GBH’s spirit division, Spiribam.