Black Tot day came and went at the end of July with all the usual articles and reviews and happy pictures of people drinking their Navy Rum wannabes. Although it’s become more popular of late (a practice I’m sure rum-selling emporia are happy to encourage), I tend not to pay too much attention to it, since several other countries’ navies discontinued the practice on other days and in other years, so to me it’s just another date. And anyway, seriously, do I really need an excuse to try another rum? Hardly.

However, with the recent release of yet another ‘Tot variant (the 50th Anniversary Rum from the Whisky Exchange) to add to the ever-growing stable of Navy Rums purporting to be the Real Thing (or said Real Thing’s legit inheritors) and all the excited discussions and “Look what I got!” posts usually attendant upon the date, let’s look at Pusser’s Gunpowder Proof which is an update of the older Blue Label rum, jacked up to a higher strength.

Sorry to repeat what most probably already know by now, but the antecedents of the rum must be noted: the name derives from the (probably apocryphal but really interesting) story of how the navy tested for proof alcohol by checking it against whether it supported the combustion of a sample of gunpowder: the weakest strength that would do that was deemed 100 proof, and more accurate tests later showed this to be 57.15% ABV.  However, as Matt Pietrek has informed us, real navy rums were always issued at a few degrees less than that and the true Navy Strength is 54.5%.  Which this rum is, hence the subtitle of “Original Admiralty Strength”. Beyond that, there’s not much to go on (see below). 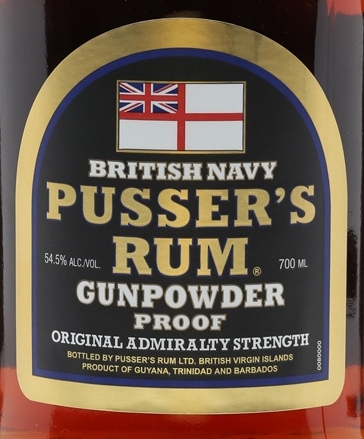 That provided, let’s get right into it then, nose forward.  It’s warm but indistinct, which is to say, it’s a blended melange of several things — molasses, coffee (like Dictador, in a way), flambeed bananas, creme brulee, caramel, cereals.  Some brown sugar, and nice spices like cinnamon, vanilla and ginger cookies.  Also a bit of muskiness and brine, vegetables and fruits starting to go bad, dark and not entirely unpleasant.

The blended nature of the flavours I smelled do not translate well onto the palate, unfortunately, and taste muffled, even muddled.  It’s warm to try and has is points – molasses, brown sugar, truffles, caramel, toffee – but secondary components (with water, say) are another story.  It’s more caramel and brown sugar, vanilla and nuts — and seems somehow overthick, tamped down in some fashion, nearly cloying…even messed with. Even the subtle notes of citrus, bitter chocolate, black tea, dates, and a bite of oakiness and tannins at the medium-long back end don’t entirely rescue this, though I’ll admit it’s decent enough, and some additional final faint hints of ginger and cumin aren’t half bad.

The problem is, I really don’t know what this thing really is. I’ve said it’s just the older Blue Label 42% made stronger, and these days the majority of the blend is supposedly Guyanese, with the label describing it as a “product of Guyana, Trinidad and Barbados”. But I dunno – do these tasting notes describe a bit of any Versailles, Port Mourant or Enmore profile you’ve had of late?  In fact, it reminds me more of a stronger DDL 12 or 15 year old, minus the licorice and pencil shavings, or some anonymous WIRD / Angostura combination . Because the blend changed over time and there’s no identifying date on the bottle, it’s hard to know what the assembly is, and for me to parrot “Guyana, Trinidad and Barbados” is hardly Pulitzer-prize winning research. And, annoyingly, there is also no age statement on the black label, and no distillation information at all — even Pusser’s own website doesn’t tell you anything about that. Seriously?  We have to be satisfied with just this?

Anyway, let’s wrap up with the opinion on how it presents: short version, it’s a good ‘nuff rum and you’ll like it in either a mix or by itself. I was more or less okay with its discombobulated panoply of tastes, and the strength worked well.  Still, I found it oddly dry, even thin at times (for all the sweet and thick background), and given that Wes rated it at 7g/L of something-or-other, I have a suspicion that the rum itself was merely blah, and has then been added to, probably because it was just young  distillate from wherever that needed correction. The brand seems to have become quite different since its introduction and early halcyon days, before Tobias passed it on — and paradoxically, the marketing push around all these new variations makes me less eager to go forward, and much more curious to try some of the older ones.