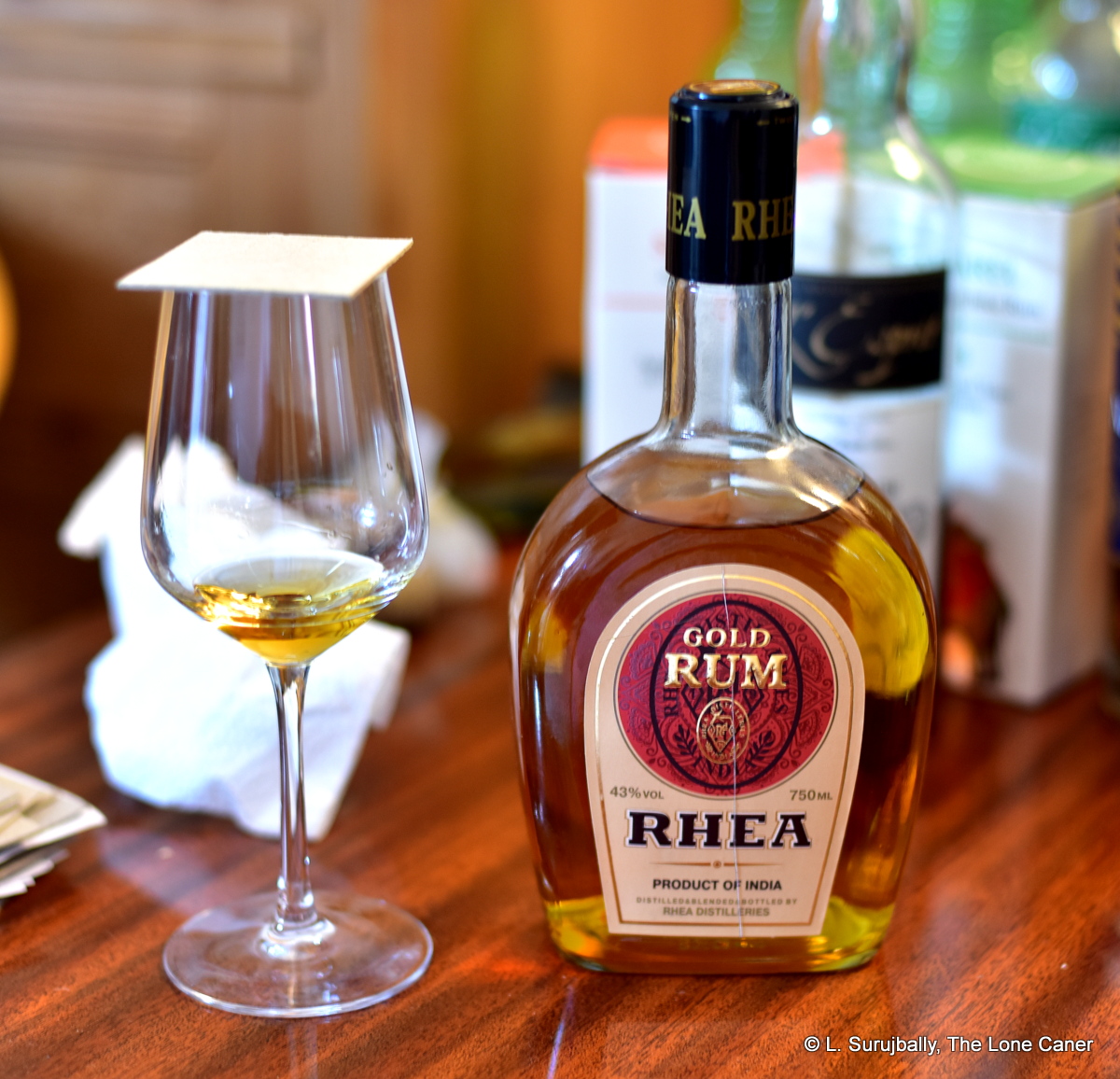 India is one of these countries that makes a lot of rum but is not reknowned for it — and if you doubt that, name five Indian rums, quick.  Aside from a few global brands like Amrut (who are more into whiskies but also dabbled in rum with the Old Port Deluxe and the Two Indies rums) rum makers from there seem, for the moment, quite happy to sell into their internal or regional markets and eschew going abroad, and are equally indifferent to the foreign rum festival circuit where perhaps they could get more exposure or distribution deals. Perhaps being located in the most populous region of the earth, they don’t need to. The market is literally right there for them.

One such product from India came across my radar the other day: named Rhea Gold Rum, it’s made in Goa on the west coast of the subcontinent, and I can truthfully say I knew nothing about it when I tried it, so for reasons that will become clear, let me run you straight past through the tasting notes before going on. 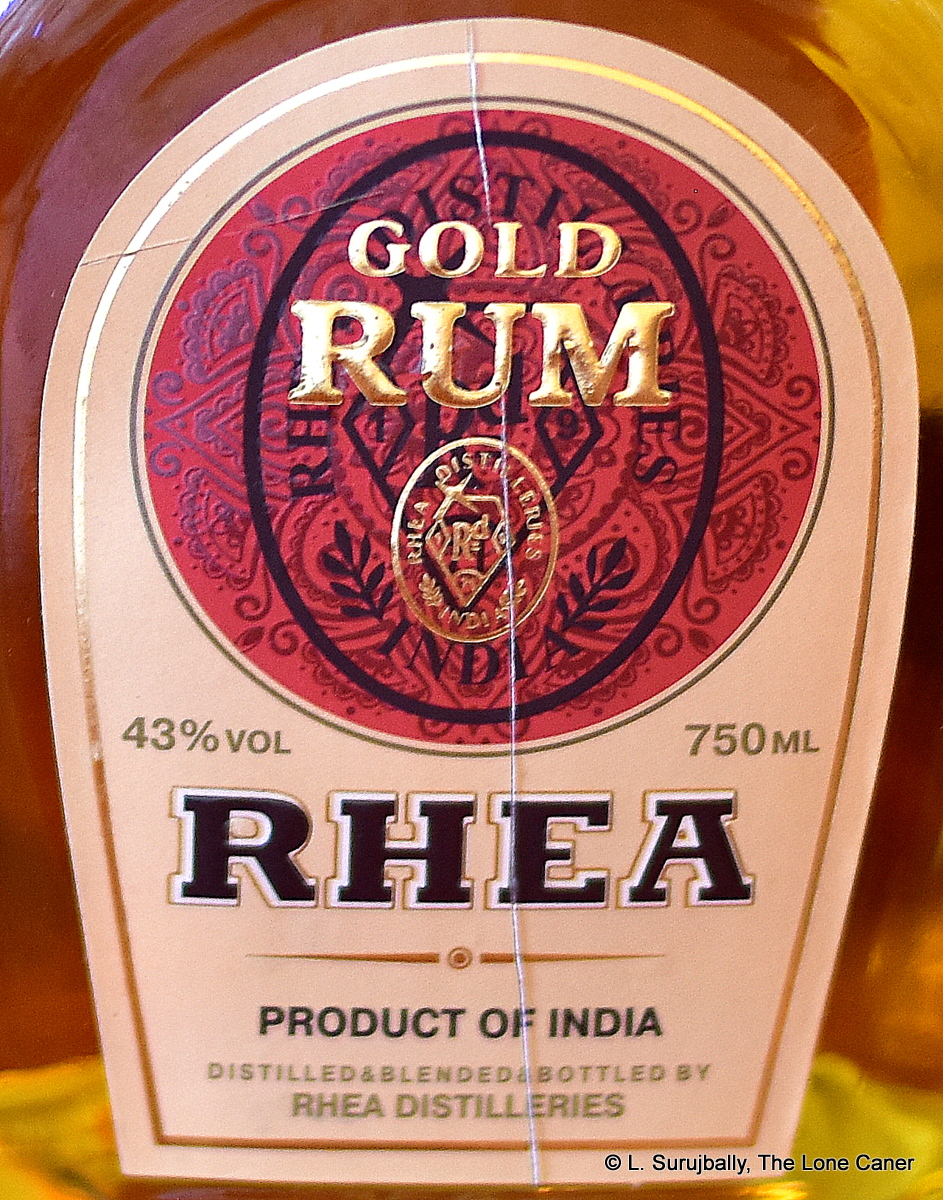 Light amber in colour and bottled at 43%, it certainly did not nose like your favoured Caribbean rum.  It smelled initially of congealed honey and beeswax left to rest in an old unaired cupboard for six months – that same dusty, semi-sweet waxy and plastic odour was the most evident thing about it. Letting it rest produced additional aromas of brine, olives and ripe mangoes in a pepper sauce.  Faint vanilla and caramel – was this perhaps made from jaggery, or added to after the fact? Salty cashew nuts, fruit loops cereal and that was most or less it – a fairly heavy, dusky scent, darkly sweet.

The palate continued that deep profile of rich and nearly overripe mangoes — big, soft, yellow and juicy, just on the edge of turning mushy.  Some tastes of pears, papayas, peaches, but not as sweet, accompanied by vanilla and nuttiness…but overall, the cloying thickness of overripe fruits became gradually dominating, even at that relatively tame strength, almost overpowering all others. There was no subtlety here, just a pillow fight. Finish was too faint and syrupy (in taste not in texture) to be interesting in any meaningful way.  It has some fruit, some salt caramel, it finishes and that’s pretty much it.

In my original written notes I opined that this is a spiced or added-to rum — such things are, after all, not unknown in India.  But in point of fact, it reminded me more strongly of the guava-based “rum” from Cuba called the Guyabita del Pinar, with which it seems to share kinship from half a world away, without being quite as good.

As it turns out, that wasn’t far off the mark. The company that makes it – Rhea Distillers – is much more famous (especially in Goa) for making variations of the local spiced alcoholic spirit based on cashews, or sometimes, coconut milk.  Called feni, it is the most popular tipple in the region, a softer, easier cousin to clairins, somewhat akin to grogues though made from fruit, not came — and is, as an aside, subject to a GI in its own right.

The Gold Rum was made from sugar cane juice according to the site and that makes it a  “real” rum – still, bearing in mind the priorities and main products of the company, the question of why it tastes so much of cashews is not hard to guess (nothing is written anywhere on the web page about production methods, except that cane spirit is the base).  Moreover, in those competitions where it was entered (ISWC 2018 and World Rum Awards 2018), it won prizes in the ‘flavoured’ or ‘spiced’ categories – not that of a straight product.

What else? Well, the front label wasn’t very helpful; the back label says, among other things, that it is aged in oak barrels without subsequent filtration for about three years and consists of “rum distillate”, water, E150a colouring, and without additional aromatics or artificial additives (the rest is health advisories, distribution and manufacturer data, shelf life and storage instructions). Well, I don’t know: it may not have any artificial additives, but it sure had something – maybe it was natural additives, like actual cashew fruit or macerate.

The website of the company also lacked any serious data, on either the product or the company background, but whatever the case and however they made it, this is definitely a spiced rum, and for me, not a very good one – perhaps a native of Goa who is used to the local drinks and buys the ubiquitous feni on the street would like it more than I did. Rhea  might be serving a captive market of millions but that’s hardly an endorsement of intrinsic quality or unique production style – or, in this case, of taste.  I found the Rhea unsatisfactory as a sipper, dominated by too few strong and oversweet tastes, and not a drink I could mix easily into any standard cocktail to showcase what aspects of it were more successful.  In short, not my thing.

Full disclosure: I’m not really a fan of spiced rums, believing there’s more than enough good and unspiced stuff out there for me not to bother with rums that are so single mindedly flavoured to the point of drowning out subtler nuances of ageing and terroire…the “real” rum taste, which I prefer. So in a way it was good that I tasted it without knowing what it was. You really did get my unvarnished opinion on the rum, and that was also why I wrote the review that way.