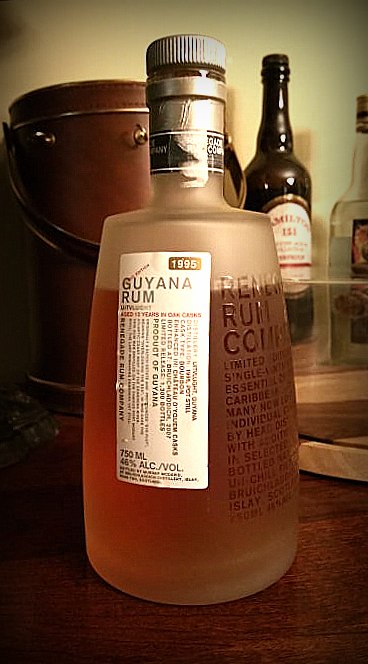 In 2019, a “mere” seven years after the company dissolved, finding one of those distinctive bottles is something of a challenge.  They very occasionally turn up on auction sites and sample exchanges, but my own feeling is that they’re almost all gone after so many years, and those that aren’t empty are being hoarded. Which is hardly surprising for bottles with such a pedigree, and a rarity conferred by not being available for so long.  This one, for example, is a 1300-bottle outturn from the Port Mourant wooden double pot still when it was located at Uitvlugt (hence the name), aged 12 years in ex-bourbon barrels, and then finished in French oak Château d’Yquem casks.

As with all such finished Guyanese rums, the two questions one always asks are “Is it representative of the source still?” and “What kind of impact did the finishing have?” I can report that with respect to the first, the answer is an unequivocal “yes.” Even without knowing it was a PM distillate, the nose presented wooden pot still action right away, with a deeper, darker, muskier profile than the somewhat more elegant Enmore or Uitvlugt columnar stills might have provided.  It smelled of fresh wet sawdust, a little glue, and both meat and fruit beginning to go off. There was a subtly sweet background aromas, which was likely the wine casks’ influence, but too faint to derail the more powerful influence of ripe peaches, mangoes, apricots, raisins. What I particularly liked was the occasional whiffs of brine, olives, saltfish, dill and avocados which was integrated really well with all the others.

Tastewise the rum did something of an about turn, and initially the sweeter elements took a back seat.  Not too sharp, a bit salty, started off with brine, olives and herbs (dill and rosemary). It developed with fruity flavours – stoned yellow fruit for the most part – gradually asserting their presence, to be joined by salt caramel ice cream, dates in honey and figs, and a touch of molasses and anise rounding things out.  Finish was somewhat indeterminate, mostly caramel, licorice, brine, raisins, none too long, which one could expect from the strength. 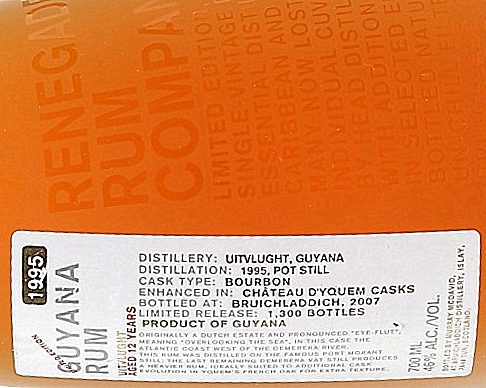 Certainly the wooden still component was there; the wine finish was a little less noticeable, quite subtle, and it had the sense to stay back and let the major flavours “tek front” and carry the show, enhancing them but staying well out of the limelight.  I liked the rum quite a bit, though overall it suggested the whisky-making ethos of its makers more than it did that of rum itself. I suggest that they were still experimenting at this stage, and the coherent quality of the rums issued in 2008 and 2009 was still to be locked in, but for all its whisky character, it succeeded well on its own terms

Renegade’s rums in the range were always a bit hit or miss to me: some were better than others and the finishes sometimes worked as enhancers, at others as distractions (in my opinion, anyway).  Here it was all pretty good, and while I would have preferred something a bit stronger, deeper and more voluptuous as a whole – the sort of dark full-proof PM profile I enjoy – there’s no denying that the Uitvlugt 1995, for those who manage to get one, is likely to please devotees of the malt world, as well as lovers of rum who like to see how things could be made when the gears and levers are tweaked a bit, and the rum takes a gander at the dark side without actually staying there.