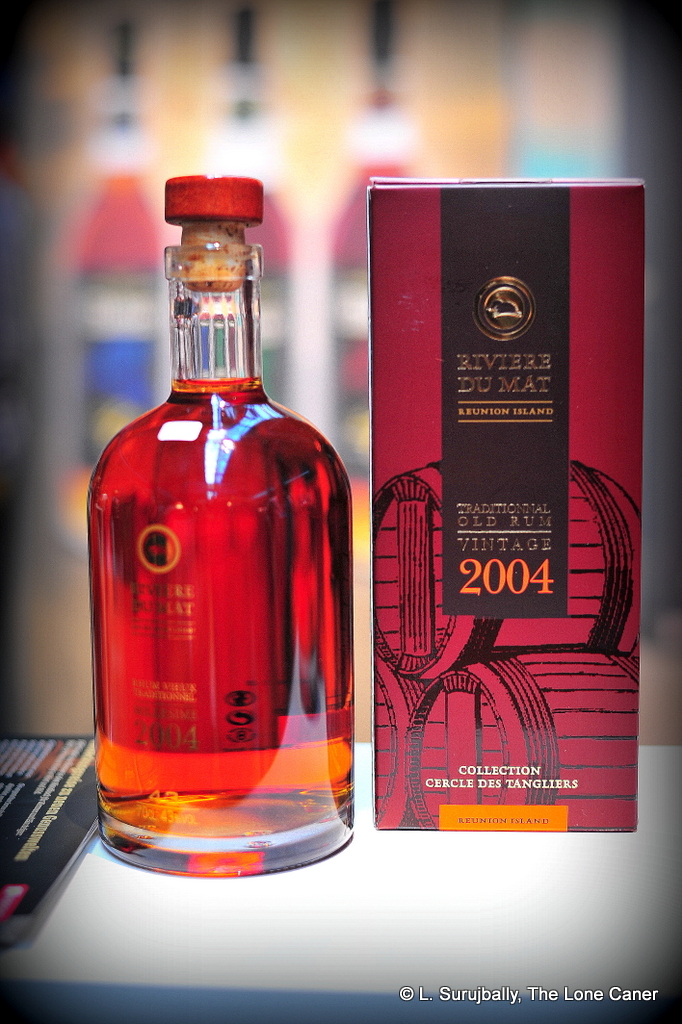 The XO is more expensive, and slightly older, yet I feel this one is better in every way that counts: I’m going to take a deep breath, go out on a limb…and say I think this is among the best rums Rivière du Mât have yet created.

Full of beans and enthusiasm after the frothing delight that was the Rivière du Mât XO, I decided to dump the previous subject of my 200th review, and go immediately to the Millésime 2004, which is close to the top of their range, and one of the better rums I had in 2014. For a rum that is less than ten years old, that says a lot for its quality and the ability of the dude who put it together.

It’s a queer thing that there is not really much to distinguish this rum were you to see it on a shelf next to its siblings, the Grand Reserve, or the XO. Indeed, with its maroon-brown box and similar bottle shape, it almost fades into obscurity next to the fire-engine red of the XO and the black of the Reserve (which may be good for the patient hunter of high-end rums, not so good for those who just pick a rum ‘cause, y’know, it looks real cool).

The XO had an average age of just over eight years, and this was eight years flat. Both rums were aged in limousin oak, but with two crucial differences: all of the Millésime stock came from 2004 distillate selected as exceptional by the master blender, and 30% of it was aged in casks that previously held port before being married at the back end.

Perhaps this was where the extra fillip of quality derived, because I’ll tell you, it started right from the nose, which was remarkably smooth and quite soft, easygoing without displaying that delicacy which so often makes a mockery of any attempts to dissect the profile. I remarked on precisely such a fragile profile in the Reserve yet in both these rums (both of which derive from molasses, not cane juice so they’re not agricoles), there was a clean and clear set of tastes: they stated with a melange of crackers and cream cheese, whipped cream, strawberries, cherries and slightly overripe apricots; this then developed on opening into notes of vanilla, ginger and nutmeg with a little coffee, rich and sensuous to smell. It suggested good future experiences to the drinker, like a girl in the red dress at the bar who’s tipping you a wink and a smile (well, we can all hope, can’t we?).

I find in quite a few rums, that while the nose promises, the taste doesn’t always deliver. Not here. It was, quite frankly, remarkably sumptuous. The Millesime 2004 was medium bodied and toffee brown, and had an immediate taste of honey and dried flowers to get things rolling, and then more fruits came crowding onto the palate, tobacco and a little aromatic smoke, coffee, ginger, breakfast spices, some of the buttery smoothness of over-soaked french bread. I loved it. It was smooth and warm and yet distinct and luxurious, like a Louis Vuitton handbag my wife keeps bugging me to buy. And it faded well, again with warmth and friendliness, no spite, leaving behind the faint backend notes of caramel and coffee and toffee, and a hint of dried flower petals. 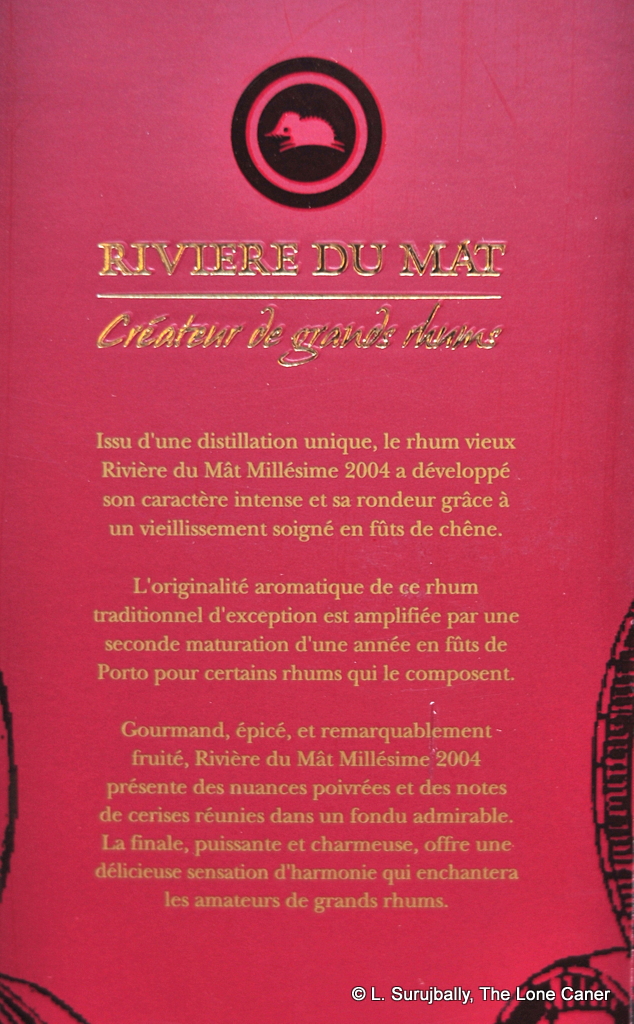 This is a rum I have no problems recommending. It demonstrates why a lower-costing, lesser-aged rum always wins over a five hundred dollar thirty-year-old. That pricey, geriatric gentleman on your sideboard can never truly go beyond what you thought it would be (though of course it can fall short)…so it’ll not exceed your sense of, well, entitlement. It’s supposed to be phenomenal – that’s why you grandly forked over the cash your wife was hoarding for that handbag: you’ve coughed up for quality, so that thing had better put out. With a rum like the 2004 Millésime — which, for around €60 can be considered relatively affordable in comparison — you won’t go in expecting a whole lot, it being an 8-year-old and all…and when it over-delivers like it does, it feels like God loves you. And that you’ve made a discovery you can’t help but share.