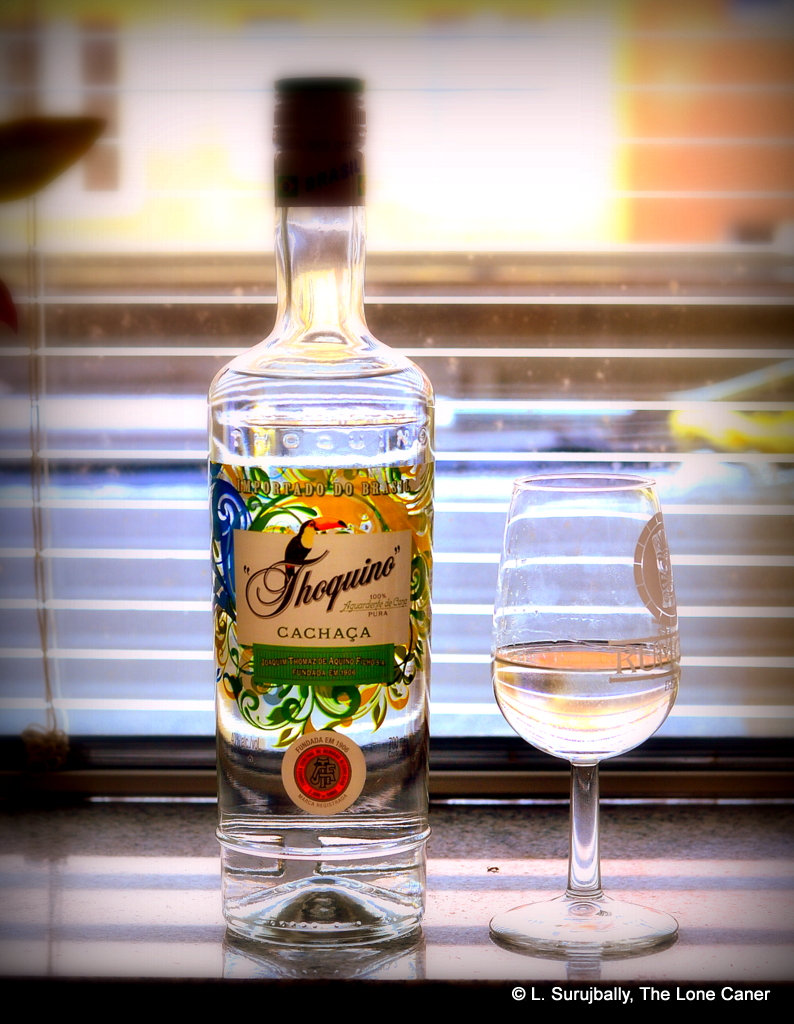 Cachaças are, as any rum pundit is aware, those cane juice based rums that are not called agricoles because they are made in Brazil rather than the French Caribbean islands. Geography aside, they have two major points of difference – one, they are often age in Brazilian woods of one kind or another, and two, those that are available outside Brazil are almost all made to be mixed in a caipirinha, not to be had neat. I’ve heard that over a thousand varieties made domestically, and the best of them are sold only there, and many top end aged variations exist… unfortunately few, if any, are ever exported, which creates the illusion that they are low end rums as a whole, and to this day they take second place to aged agricoles. Which is a shame, really, for it denies the rum world of potentially world beating products. 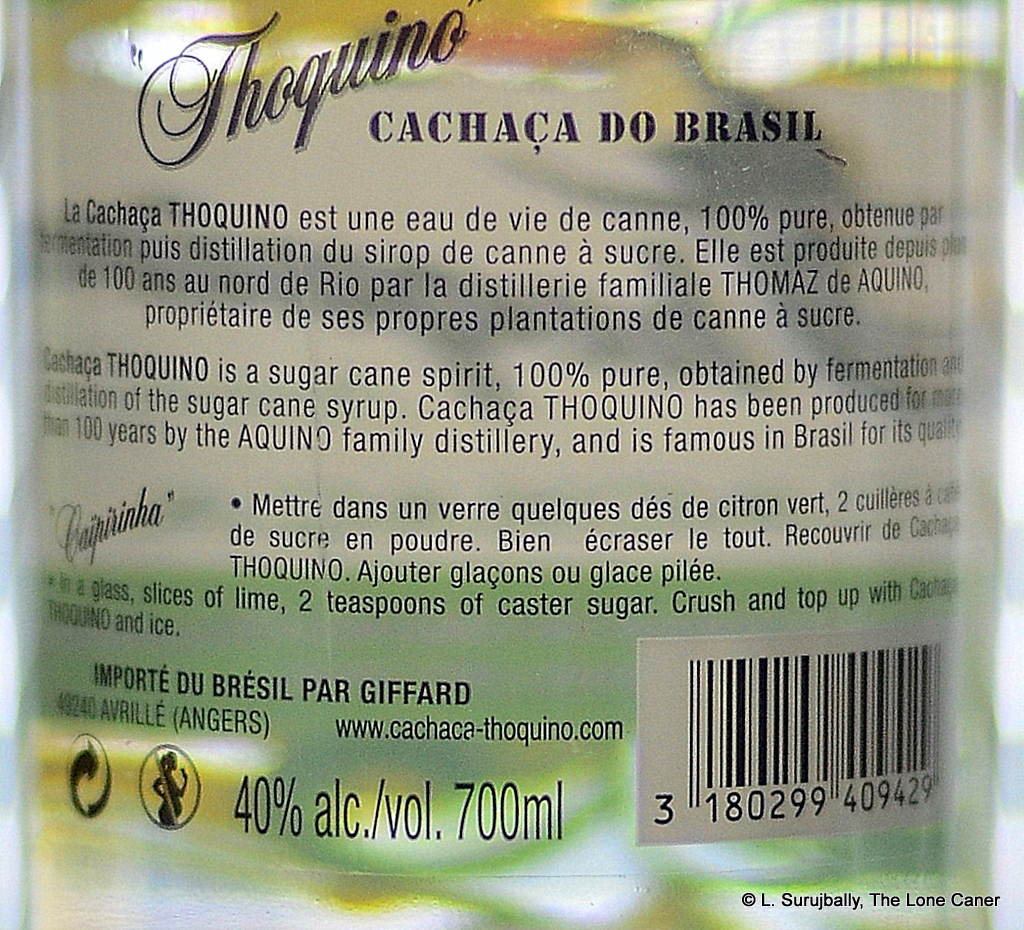 Thoquino is a company formed in 1906 by Thomaz de Aquino, and is located in Sao Joao de Barra, the Campos area just north of Rio de Janeiro, where sugar cane cultivation goes back to the earliest colonization of Brazil in the 16th century and which is considered the “traditional” area from which the best cachaças originate. The company has its own sugar cane fields, which apparently is somewhat unusual for a Brazilian distilling company, and which allows it to control and integrate the entire process from cultivation to the final product, in-house. The spirit derives from fresh pressed cane juice which is fermented for an unusually long eight days, and then double distilled (I suspected it is filtered as well); there is no information available on any ageing, and since normally both age and the wood in the barrels is proudly trumpeted to the heavens, I’d suggest this is a zero year old. No information on stills is available.

Having written all the above, how’s the rum? Well, nosing the clear 40% spirit made it clear that it stemmed from the same family tree as the Haitian clairins and the Capo Verde grog, if not quite as raw or brutal aggressive; and I formed the sneaking (if entirely personal and unconfirmed) suspicion that it hailed from a creole coffey still. It smelled sweet, yes, with black pepper, oil and brine in there somewhere (sort of tequila-like but with less salt), sharp and uncompromising as a zealot’s hot glare. Over time it turned vegetal, with more pronounced aromas of sugar water, citrus and (get this!) cinnamon rolls hot from the oven.

The taste was initially quite lovely, rolling light and sweet and (relatively) smooth across the tongue. It wasn’t complex in any way, but it was pleasing in its own understated fashion. There were some flowers and fleshy fruits — pineapple, bananas — in an uneasy mix with sharper pepper and citrus rind, sort of held together by the vegetal sugar water, and in the background there lurked the toned-down notes of olives and brine, held under tight control, leading to a short, sweet, light and overall unexceptional fade.

As tasting notes went, the cachaça more or less confirmed its antecedents without trying to break the mould. Since it was advertised and marketed specifically as a caipirinha agent, perhaps it would be churlish expect a top end spirit here, and indeed, the company does make an aged version (aged in Jetiquiba wood) which I have not tried. So all in all, a straightforward mixing agent then.

Still, maybe it’s time for some enterprising rum maker to take a plunge and start promoting the best of the cachaças in the western markets. Not the good quality young stuff, but the really amazing rums which only Brazilians are aware and which remain unknown to the majority. Bert Ostermann of the German company Delicana has tried with limited success to do so, some independent bottlers like L’Espirit have issued the occasional aged bottle, and we need more. Although the Thoquino and others I’ve tried may not quite be there (yet), we should keep an eye on Brazil in the years to come, for their rums point the way to another facet of the ever changing rumiverse. If Luca ever decides to go there, watch out. 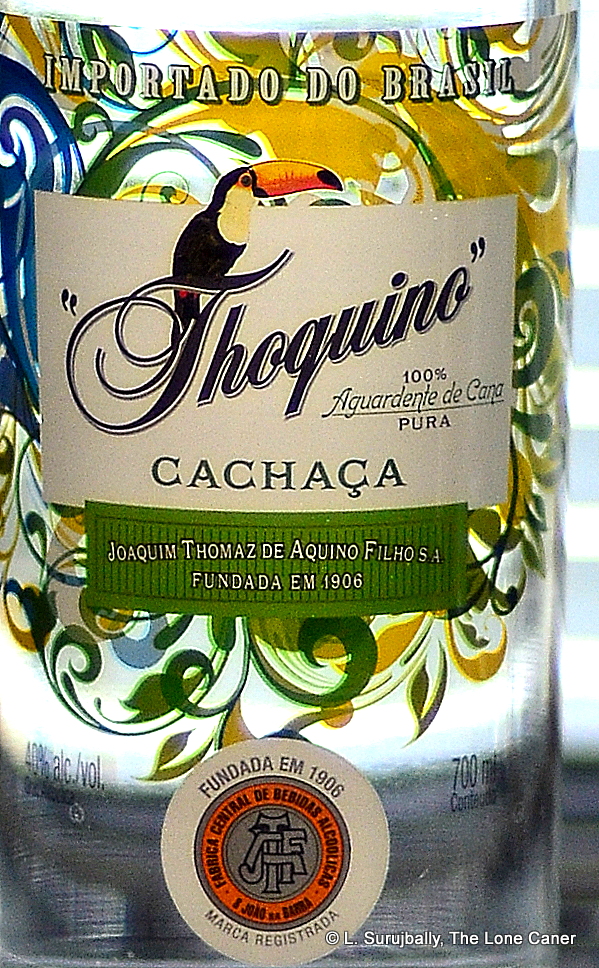