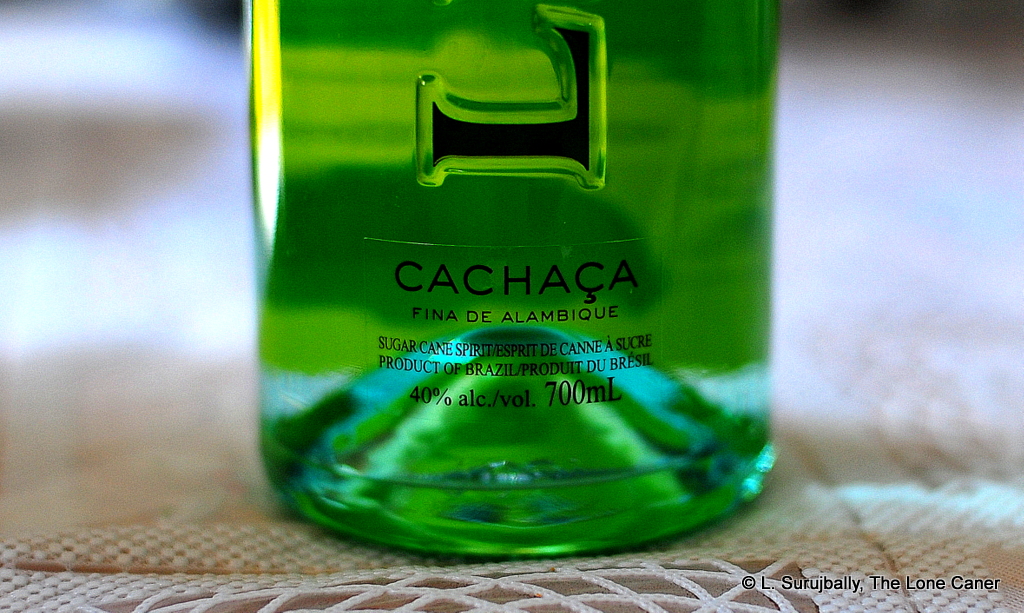 Cachaças, the rhums of Brazil, remain among the most unrepresented rums in the world, both from a perspective of being written about in reviews or info-blogs, or of actual knowledge of their incredible variety outside their place of origin. And yet supposedly some 1500 or so such rums exist (one writer says it’s 5000), far eclipsing the other cane juice minority of the agricoles, which get much more attention. Amazingly, a mere 2% of these rums ever get exported to the rum swilling public (most of them unaged whites), which makes Brazil the next great undiscovered country.

Leblon is a cachaça produced off a French-style copper pot still at the Destilaria Maison Leblon in the Minas Gerias region of Brazil (it’s the huge territory north of Rio, and supposedly the premier region for the spirit in the country). The label speaks of light ageing, and the website says it’s in French oak barrels that once held XO cognac. Although not mentioned I’d suggest “light” means less than six months because the brownish tint to the rhum is well-nigh imperceptible and it just doesn’t taste like anything left to rest for an extended period.

Like with most cachaças, the idea is not to drink it neat (though this was the basis of the review) but to mix it in the Brazilian national cocktail, the caipirinha, where, with their sunny optimism, the Brazilians usually remark “The worse the cachaça, the better the caipirinha.” Well, by that standard, this one must make a killer drink, because of the various cachaças I tried that day, this one came in picking up footprints. In 2009. a writer from WineCompass said “We have tasted several excellent cachaças over the past two years and Leblon is easily the best,” but I guess he and his fellows were looking for different things than I was.

This was partly because of the excessive woodinesss of the nose. Cachaças may be aged in local timbers (and the Delicana rums, you will recall, indulged themselves in aging in some very peculiar woods indeed). This one was not just woody, but excessively so – it was like I just bumped into Treebeard’s backside. Yet, this is a cane juice pot still rhum, which is then filtered three times, so obviously that was a deliberate choice to have the woodiness so initially dominant. Anyway, pungent wax and resins and tree sap were the first scents I noted, a quick, sharp explosion of them…and then they were gone. Sugar water, extremely light fruity notes (a melange rather than anything clearly individualized) and bright green grasses after a rain. The smells got a little heavier over time developing an almost creamy heft of breadfruit and pumpkins and it was all a rather sharp, short experience, if intense for a 40% rhum.

Unlike the Jamel and the Sagatiba cachaças which I tried together with this one (I’m going in ascending order of my scores), the sugar water taste of swank was mostly absent when I tasted it. It was again creamy warm solidity rather than light effervescence, medium bodied, hardly sweet at all (though I tasted something of a watermelon rind with some pink still clinging to it, and a lemon pip or two), and trended more towards a toned down tequila mixed up in an olive-based fruit salad from which most of the fruit had been removed. I should note that the woody tastes that started off the party were not evident on the palate…but came back to a raucous goodbye on the fade, lots of tree bark and the slight acidic bitterness of sap, mixed up with sugar water and fresh fallen rain on hot wooden planks.

Summing up, all the markers of an agricole are here in this cachaça (although let me hasten to say I am not rating the Leblon against the white French island rhums) — the cane juice origin, pot still distillation; the spicy, sugar-water and watermelon tastes, but with that creamy taste which rubs up the wrong way against the lighter tartness of the barely perceptible fruit; and it demonstrates a peculiar Brazilian distinctiveness that marks it out as “not French.” In fairness, all sources are adamant that this is a rum to mix, not drink as a sipping juice, and I’d recommend it that way as well. It’s by no means a rhum you should try neat as your first sojourn into the spirit. If you’re into French island rhums, and younger, rawer, more untamed spirits, and love your cocktails, well, sooner or later you’ll come to cachaças, yes. But not necessarily this one.