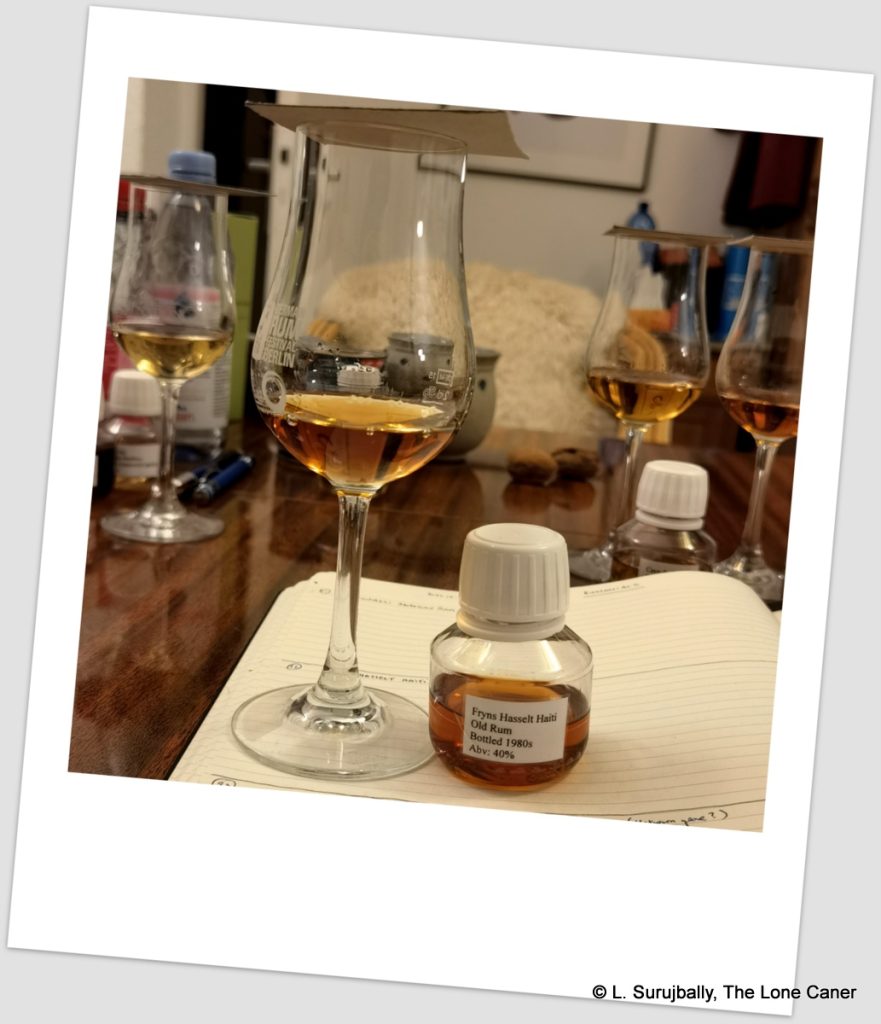 All sorts of little mysteries attend this rum.  First of all, what we know: a Haitian rhum bottled by a Belgian outfit named Fryns Hasselt in the 1980s, at 40%. What we don’t know: cane juice or molasses, type of still, which estate or brand, where it was aged and in what kind of barrels – though I think it’s a fair bet it’s Barbancourt, it came from a column still, and the ageing was around five years, likely in Europe. A bottle – perhaps even the same one flipped several times –  appeared on Whisky.Auction in February, March, April and May 2019 (which is, coincidentally, just around the time I scored the sample). It seems to be the only one ever released by the little company (see below for a short bio).

Nose – Not much going on here.  Very very light.  Grapes, green apples, a touch of vanilla and evidence of heavier fruit sensed but not really tasted.  Bananas, whipped cream on top of a caramel macchiato.  Takes some time to come to grips with this rum, and it opens up to strengthen the vanilla and caramel component, and add a sort of weak fruit salad vibe.

Palate – Actually quite a bit better than the nose leads one to believe, although conversely, it’s more a matter of intensity than anything new. Caramel, vanilla, nutty fudge, a hint of flambeed bananas, stewed apples and somewhere behind all that is a suggestion of very hot loose-leaf strong black tea cut with evaporated milk, plus just a whiff of citrus zest.

Overall, for all its wispy nature, it was serviceable, and I found little beyond its weakness to dislike: but when this much time and effort is required for a sniff and a snort, it’s hardly worth the trouble. It’s simple, it’s near weightless and reasonably effective at saying it’s a light rum but beyond that, it’s thin pickings and not something that showcases itself effectively enough for a real recommendation. As for it being an actual Haitian rum, well, we’ll have to take that one on trust.

So who is Fryns Hasselt? An interesting little company, all in all, and they demonstrate that the French and Brits and Italians weren’t the only ones with liquor merchants who had a rep in the late 1800s and that there were small towns not called Flensburg that had several distilleries and bottlers that dabbled in rum.

Gin (or jenever) at that point was a cheap liquor for the masses made from sugar-beet molasses, but there is no record I was able to find that suggests rum was ever physically made in Hasselt. Belgium’s colonial adventures at that time were more in Africa than in the Caribbean, specifically the Belgian Congo. As the Brits found out in India, gin was known to be useful in that it disguised the bitter taste of the anti-malarial drug quinine – which may have accounted for its expanded production, quite aside from keeping the huddled masses toped up and out of mischievous activities like revolutions or communism or questioning the divine right of the king to have huge private properties in Africa while many Belgians of the time lived in misery.

The small town of Hasselt has an interesting history which I’ll leave you to discover for yourself: the key point is that for centuries it was known for its gin distilleries, to the extent that there is a now a jenever museum in the town, and an annual Jenever Fest to celebrate the spirit. In the 19th century, gin production was the most important industrial industry in the area, and most of the involved distilleries were located in Hasselt itself.

Fryns was a family company established in 1887 by the family patriarch Guillaume Fryns: he opened a distillery in a building called “In the Cloverleaf”, situated in a shopping street in downtown Hasselt, and indeed, the cloverleaf has become a logo for Fryns ever since (they trademarked it in 1908). The company passed to Guillaume’s sons Guillaume Jr. and Jules after his death in 1909, and they expanded production by adding a malt house and an ice factory to the premises, more branches in other cities and a fleet of trucks to service them all. They also spruced up the packaging and branched out into liqueurs, which were fashionable in the Roaring Twenties.

The WW2 years saw them shut down for lack of cooperation with the occupying forces so they started the rebuilding with the third generation of Fryns in 1945 and kept a steady business running; however, financial and familial problems forced a sale to external investors in 1979.  The name and branding was kept, and in 1988 another large Hasselt-based distillery called Bruggeman bought it (along with a second company called Smeets). In 1995 Bruggeman moved the whole operation to Ghent, and so the involvement of Fryns in Hasselt came to a close.

This was not the end, however, because  2018 Michel Fryns (a fourth-generation scion of the family) reacquired the company and distillery from Bruggeman and promptly moved it back to Hasselt, where it remains to this day, making gins, liqueurs and pre-mixed drinks.

That’s all gin production and corporate history. With respect to rum, as far as I was able to discover, the company never actually made any. My informed supposition is simply that the the new owners post-1979 cast around for other sources of revenue and somehow got their hand on a few other distilled spirits. The only rum Fryns ever released was the old Haitian rum, and one can only suggest that it was an experiment that went nowhere, because aside from the (gin) distiller Smeets, who produced two rums called “Blacky” and “Castelgy” of uncertain provenance (they may have been verschnitts) and the Distillerie Theunissen who put out a single Jamaican rum, there is no record of any other rum ever made (which is to say, bottled) in the town. Certainly Bruggeman never appeared to have released any rums while they owned the company and the brand.

Logistics and a lack of interest probably defeated them, as there were better rums coming out of France, Britain, Italy and northern Germany. So they focused on their core competency and let the idea of branching out into rum wither on the vine, so to speak.  That’s a fair bit of supposing and maybes and guesswork, but I think the chain of logic is reasonable.