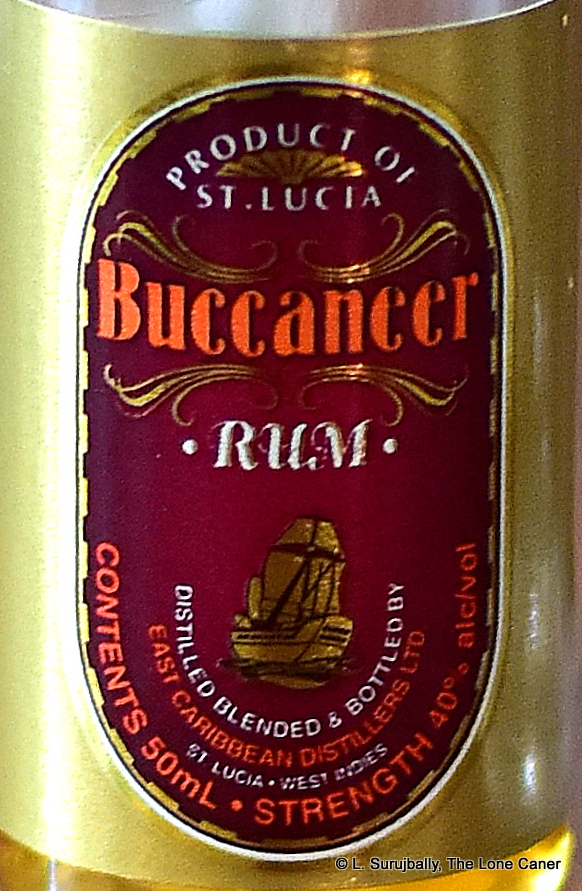 Ed Hamilton, in his 1995 book Rums of the Eastern Caribbean, made mention of the Buccaneer rum as a regular part of the St. Lucia Distillers lineup, but nowadays the rum is no longer in production – the last reference to it was an award given to it in the 2003 Rum Fest (which fest it was is somewhat open to conjecture), and a notation that it was discontinued, later confirmed by Mike Speakman that it was in the same year.  So we can assume that the Buccaneer I tasted is at best an early 2000s rum, no later, and probably earlier. An interesting point is that Hamilton wrote of it as being 43%, but both the label photo in his book and my sample came in at 40%.  It’s likely that both variations existed, depending on the market in which it sold (i.e., US versus Europe) – DDL did the same with its El Dorados, for example. Also, Eastern Caribbean Distillers (as per the fine print on the label) is a subsidiary of St. Lucia Distillers set up in 1987, but I can find no reference as to when the name ceased to be used.

[As an aside, Buccaneer is a title used by several rums over the decades: I found references to a Buccaneer Superior White, a blend of Bajan and Guyanese rum (Buccaneer Vintners, UK); another from Maryland USA (Majestic Distilling) that touted its origin as Virgin Island rum; and a Buccaneer matured rum from Ghana, made by Gihoc Distilleries in Accra, but the background of which is too lengthy to go into here.]

Nose – Honey, molasses, brine, olives, and the richness of ripe prunes, very arm and smooth.  It’s a little sharp to begin with (it settles after five minutes or so), and has some interesting background aromas of gherkins, cucumbers, pears and a sort of salt-sour tang that’s difficult to pin down precisely but is by no means unpleasant.

Palate – Oily, salty and sweet all at once.  Tastes a little rougher than the nose suggested it might be, but is also quite warm after one adjusts. Pineapple, cherries, mangoes, followed on by dates, molasses, honey and brown sugar, and a touch of vanilla.

Finish – Medium long, and here the molasses and burnt brown sugar notes really come into their own.  Also some light fruitiness, aromatic tobacco and vanilla, but these are buried under the molasses, really.

Thoughts – Certainly a rum from yesteryear.  Nowadays the big guns from St. Lucia Distilleries are the 1931 series, the Admiral Rodney, the Chairman’s Reserve (and its offshoot the “Forgotten Casks”) and some of the cask strength offerings of the Independents (including Ed Hamilton himself). The writing had been on the wall for the wide variety and range of the distillery’s rums even back in the 1990s as they focused on core competencies, consolidation and better-selling brands.  It’s kind of a shame, because this rum was quite a decent dram – but I like to think that all they learned in all the decades since they made them, has now been incorporated into the excellent series of standard proofed rums they make now.  In that sense, the Buccaneer still lives on.