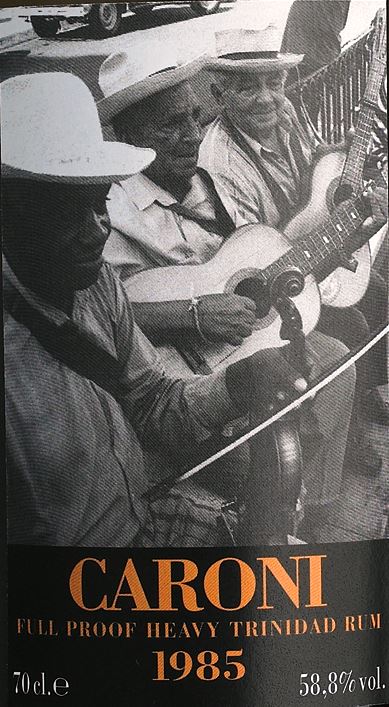 Two more Veliers to go before we move onto other old rums, this is the “younger” one, bottled in 2006, from that Port Ellen of the rumworld, Caroni.  Here in 2004, legend has it, Luca was (as usual) talking rum, chewing sugar cane and taking pictures, when he literally tripped over (not into) a warehouse of stored casks, probably forgotten, all of  which he eventually bought.  Talk about a coup de maître – they should make a film about him: Indiana Gargano and the Lost Warehouse, know what I mean? No one in the rumworld, before or since, ever came close to uncovering this kind of treasure.  And to his credit, he didn’t blend the lot, but issued them in no less (and probably more) than 31 separate bottlings, which is good for us as buyers, even if we get threatened with divorce quite often when we fork over our pieces of eight.

Nose – Damn, Caronis get better every time I try them, and this one gets better with every snooting (had enough for three passes at the thing). Beats out the Albion 1986, actually. Wooden tannins and vanilla, tarry and deep and hot, with some of that funkiness of the Jamaicans sneaking around in the background. Vague promises of fruits and licorice were being made, just enough to keep me enthused.

Palate – Dry, furiously oaky and sharp.  Some brine and olives, more vanillas, ripe red cherries, a flirt of caramel, and then a barrage of dark fruit, esters and licorice lands on you with the solidity of an Egyptian pyramid block. Gotta be honest though, even with all the fruity stuff, that oak is more dominant than usual here. Water helps, and mutes that oak knife, allowing more tars and some floor wax to take their usual central role.

Finish – Long, pungent, hot. Some coffee, licorice, sweeter fruits, more tannins (better controlled than on the tongue). Not entirely dry, but not lusciously damp either.

Thoughts – Kinda conflicted on this one.  Started out great then got hijacked in mid-palate by tenacious oaken flavours which, however tamed, still were too obvious. Not one of the worst Caronis, but not one of the best either. No matter, I still enjoyed what I got.