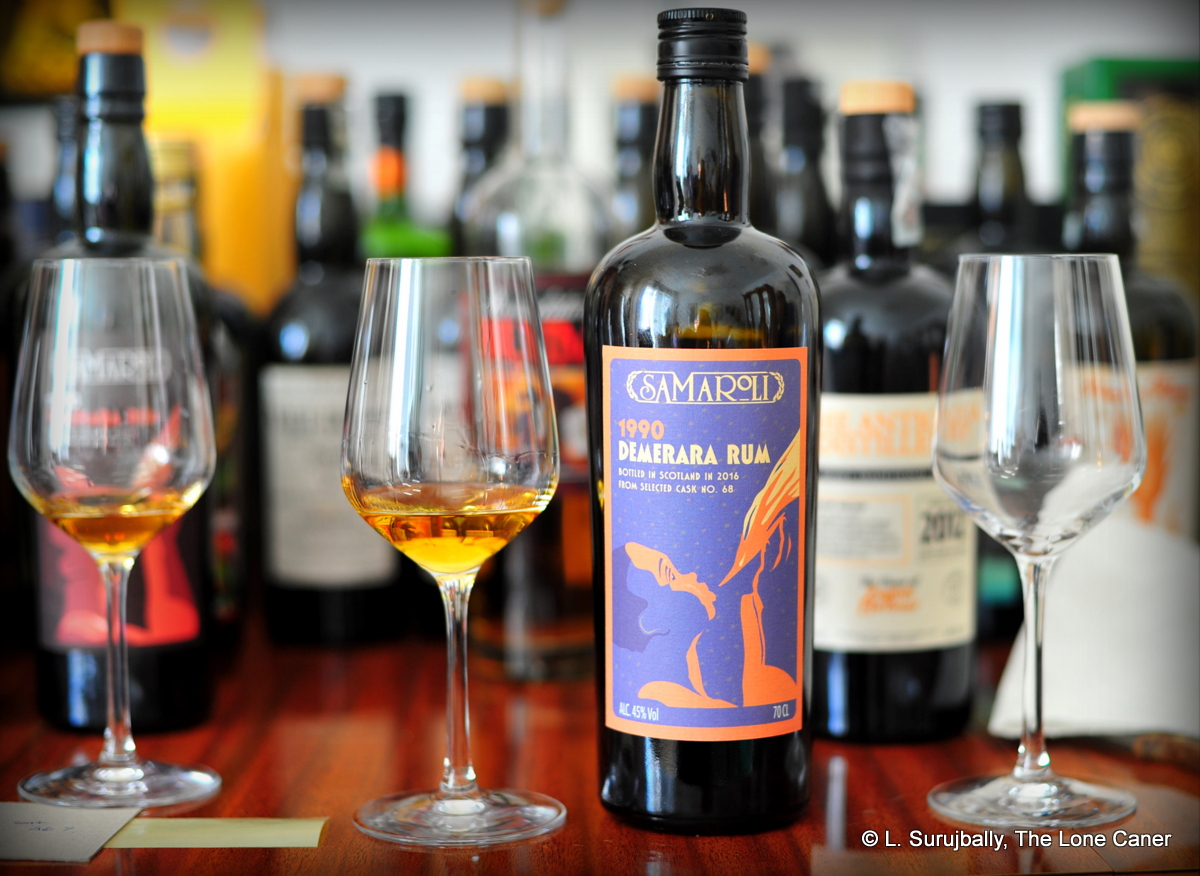 Samaroli was one of the first of the modern Italian independents, and focused primarily on whiskies, which remains the core of its indie bottling business to this day. The reputation of the company began in 1968 when Sylvano Samaroli began bottling for the Italian market — the first non-UK bottler to deal seriously in that obscure Scottish tipple — and eventually started issuing rums as well. The most famous of all his rum selections, and reputedly his own favourite, was probably also the first: the 1991-bottled unicorn rum of the West Indies Dark Rum from 1948. The next rum bottlings were done around 1998 and there were a few sporadic non-too-regular releases here and there until 2010…and in that year it’s like the hound was let off the leash and releases have come thick and fast ever since.  Not just the usual single cask expressions, but blends and NAS rums, and the ship shows no signs of slowing down any time soon. 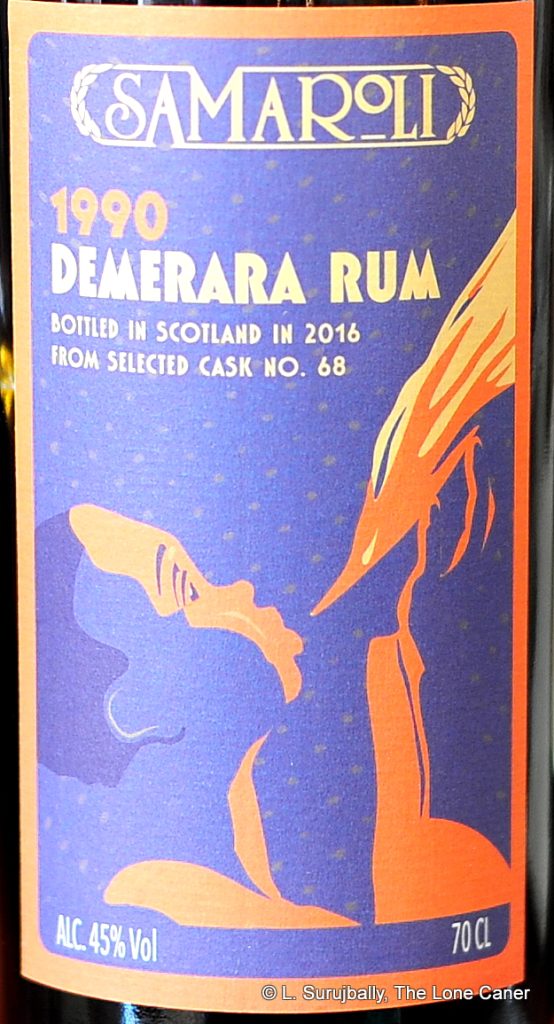 The rum we’re looking at today is a Guyanese from 1990, bottled 26 years later in 2016 at a reasonable 45% (though admittedly, that’s rather mild for single cask releases) and from a single cask (#68) which decanted 240 bottles. Curiously, the still of origin is never mentioned. Samaroli may have been an early bellwether and trendsetter of the rum scene (as Renegade was in another context), but disclosure was never as big a thing for them as it was for Velier, though far better than Moon Imports, say. The 1990 Guyana vintage, as an aside, seemed to be a favoured year for Samaroli, as they released several expressions from it, in 2007 (two, a PM and a VSG), 2014, 2015, 2016, and 2017 (also a PM). With a few exceptions, almost none disclosed the still, so clearly this was deliberate; and since by 2016 that was surely a thing for connoisseurs of Demerara rums, one can only assume they did not consider it important for some obscure reason, or that the rum was blended in the barrel from several sources.

So we have to guess, which is always fun with Demeraras, and that all goes to the profile.  Which starts, as always, with the nose: here it’s woody, with early notes of licorice and caramel, wet sawdust and dark fruits like prunes, raisins, plums, black grapes. It stays that way for a bit, before one senses soft flowers (lilies, just a touch of lavender), pencil shavings and an odd aroma of freshly baked bread dipped into a mixture of red wine, balsamic vinegar and olive oil (it’s not unpleasant, just unusual), with additional tannins, leather and polished wood bringing up the rear. The fruits are kept secondary for the most part, and stay noticeable, but in the background.

How it tastes is not significantly different, although less satisfying.  All the same hits are playing but out of order: caramel, sawdust, licorice, dark grapes, raisins, and dates bitten into and devoured by the bitterness of sawdust, lumber, sharp licorice and gingersnaps. It gets somewhat better over time, just not spectacular, one the fruits – plums and cherries and prunes for the most part – take on more weight.  Then the rum starts to taste more robust, and even creamy: one gets yoghurt and sour cream sprinkled over with cinnamon, cloves and cardamom, with the heavier notes of toffee and caramel holding the high ground throughout.  Finish is nice, sweetish and muscular, long lasting (for 45% that’s impressive), channelling final notes of prunes, nuts, thyme, blancmange … and even a touch tomatoes on hot bread reminiscent of pizza! 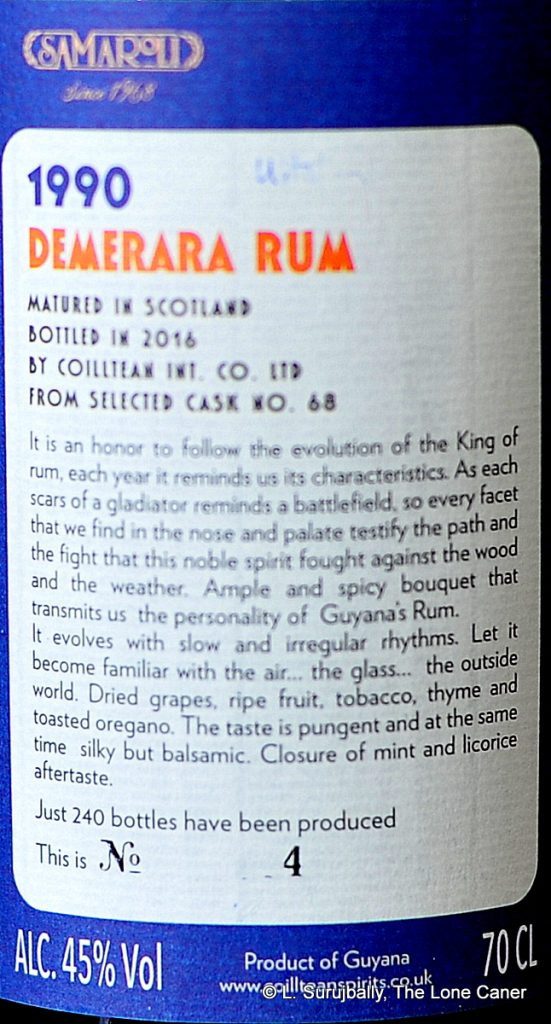 When I think of Samaroli, it always seems like it’s the grand old man of the indie rum scene; admittedly it has only few really phenomenal, well-known must-have unicorns in the pantheon, and the field has gotten way more crowded with new entrants…yet somehow, it has always seemed to be Samaroli that others aspired to beat. Perhaps it’s because in the 1980s and 1990s and even 2000s, Sylvano influenced a whole raft of young up and coming European rum and whisky people – distillers, collectors, distributors, simple anoraks – who went to him for advice or to see how he did things and paid him homage in their subsequent writings. I have my own favourite Samaroli rums, but given that he up and stepped away from the company in 2008 while retaining some influence in selections, it’s hard to know for sure which bear his fingerprints and which don’t.

Circling back: my first guess on the still is that it’s the Enmore wooden coffey — it lacks the slight roughness of the VSG, and doesn’t have the depth of the PM — but for all anyone knows, it could be a blend as well. It’s difficult to classify precisely, because there are so many odd, even discordant, notes at play here, which means it never gels into something one can really appreciate. And while obviously a “real” rum, it’s also something of an odd duck, what with those balsamic and tomato notes I observed: which lead to amusing mental connections, but also some level of confusion. Gregers Nielsen, who was shamelessly (and all-too-generously) pilfering from my bottle in Berlin the day we were trying this thing, opined that the finish was great, which it was, but alas, that was not enough to save the overall experience being somewhat flat and muddled — and at the end, my opinion is simply that it’s rather more miss than hit.