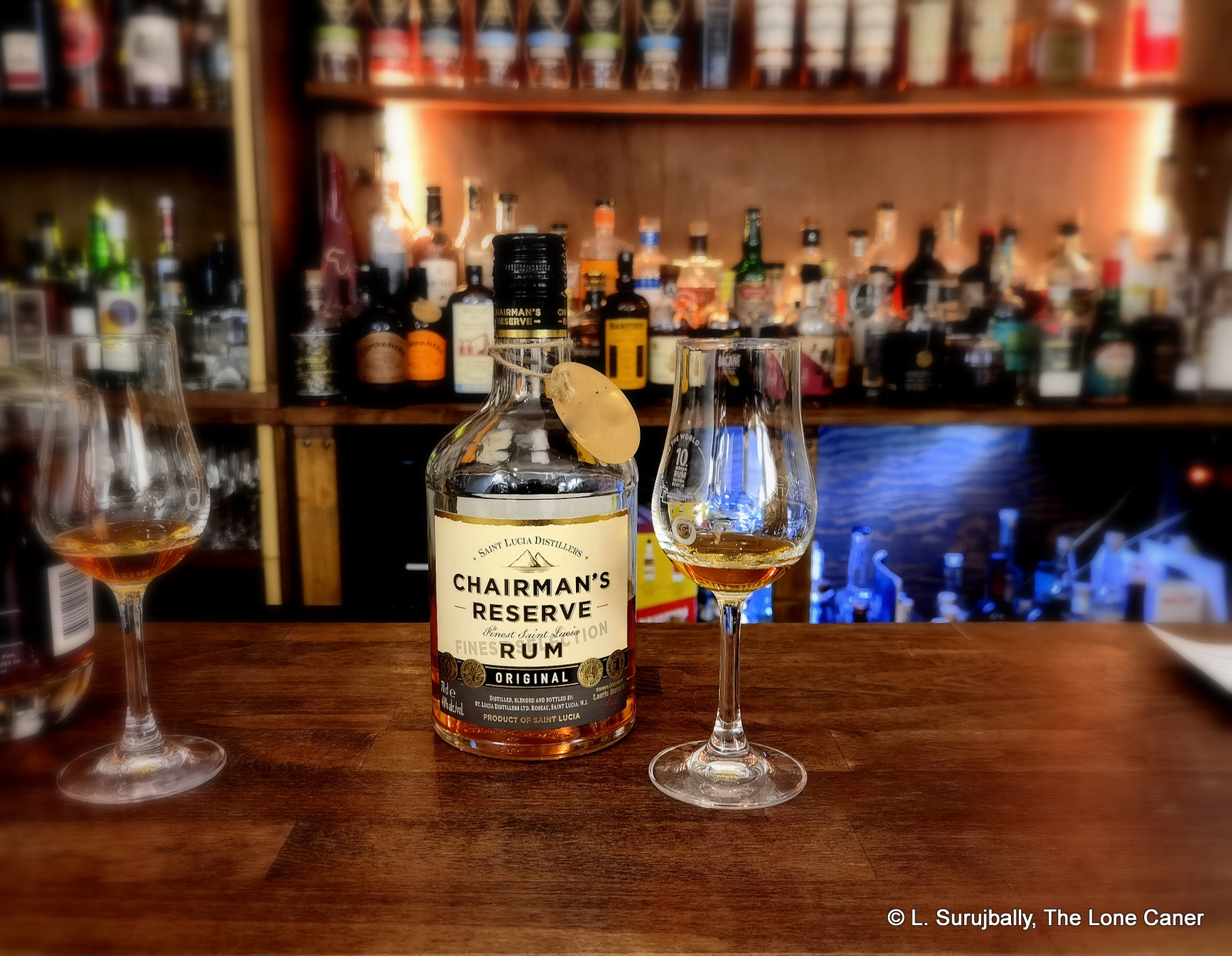 Of all the rums that St Lucia Distillers makes, perhaps the best known and most widely drunk is the line of Chairman’s Reserve. It was already well regarded when I started this gig in 2009, and it remains a workhorse brand of the company today, more than twenty years after its debut. The Bounty brand is below it, the Admiral Rodney was once above it (in perception if nothing else) but the Chairman’s Reserve always held a cachet all its own, even when it was represented by just that single expression that started the cart rolling.

Made as a blend of pot and column still distillate with around five years ageing, the Chairman’s Reserve aims at a middling sort of profile that eschews the extremes of either light Latin ease or hard-edged funky uniqueness.  The rum was created in the late 1990s when Laurie Bernard (the Chairman himself) felt it was time to create a premium rum that would showcase what the island had to offer – more than just bulk rum shipped elsewhere, more than merely the local or tourist trade island rums like Bounty and Denros…something a bit more upscale. I don’t doubt that some inspiration was taken from the enormous success of the 1992 release of the El Dorado 15 year old and Mount Gay’s own experiments with premiumization, but what was created was so good and remained so popular, that even two decades in, the rum has not lost its lustre.

Which is not to say the rum stayed the same, or that others did not come along that changed the marketing. In 2011 the Chairman’s Reserve “Forgotten Casks” rum was released; the Admiral Rodney and the annually reformulated “1931” limited editions were trotted out at roughly the same time, all aimed at taking the distillery brand more upscale. This process continued — perhaps even accelerated — in 2017 when SLD was acquired by GBH (Spiribam) and a game of musical rums began. They expanded and switched around the Admiral Rodney rums, from being a single rum positioned between the Bounty and the Chairman’s Reserve, to several older and named “ship” expressions at the top end. The yearly 1931 series was discontinued entirely (No. 6 was the last one), the profile was locked into a single stable “1931” (it’s got about 9% cane juice, I’ve heard), and was moved to the top of the premium line with the words “Chairman’s Reserve” added to the labelling.

Now, Chairman’s Reserve – that one single special rum they had started with – had to that point been seen as the premium face of SLD, the recognized face of the brand’s exports, right back from the time of its introduction in 1999.  However, when the portfolio was being rationalised, it was likely felt that it was a little too staid, maybe no longer top-tier…and so it was decided to expand it, a lot. The Reserve became a whole range in its own right, a series varying in both quality and price – when last I checked there were nine separate rums bearing the imprimatur of Chairman’s Reserve: the Original, Forgotten Casks, “2005”, “2009”, “Lewellyn Xavier,“ “White Label”, Legacy” “1931” and the “Masters Selection.” They range from about twenty pounds for the Original, to over a hundred for the Master’s Selection, and only one (the Master’s) exceeds 46%.

With all that competition and expansion and premiumisation, the Original seems to have faded to the back, but I submit to you that this should not be the case. It remains enormously affordable and one of the few of the St Lucia Distiller’s stable one can find just about anywhere; it is widely commented on, and almost every reviewer still standing has, at some point, taken a crack at the rum (or one of its descendants). It was the first St. Lucia rum the Fat Rum Pirate tried in 2014, and he loved it; so did the Rum Shop Boy, six years later, as well as The Rum Howler; the boys at Rumcast mentioned the CR series in their 2020 roundup (Episode #17 at 0:24:50), John Go in the Philippines came to it more indifferently in 2021, but if Rum Ratings and reddit are anything to go by, people have been encouraged to go for the other variations in the Chairman’s line precisely because the original colonised our mental mindspace so comprehensively…even if they have forgotten the first one from which all others descend. 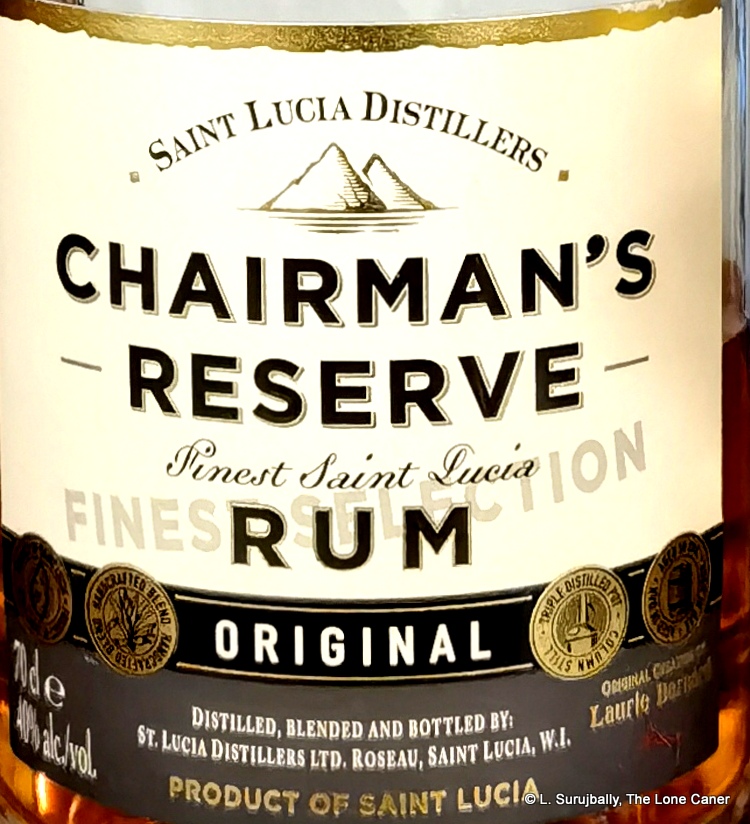 And when I went at it again in 2021, I came to understand something of its enduring appeal, because even at 40% ABV, even with its great familiarity (I’ve tried it many times, though only in social settings that precluded taking detailed notes upon which to base a review), it held up its end really really well.  Granted it was standard strength, and that doesn’t always work: but the nose it started out with was quietly impressive.  It was creamy, buttery, slightly sweet (but not sweetened) and smelled deliciously of toffee, Danish cookies, salted caramel ice cream, vanilla, honey and a touch of brine. Not a whole lot of sharp fruits presented themselves, and apricots and banana and ripe cherries were pretty much all, so no sharper citrus notes were there to start a riot. There were hints of herbs like rosemary, and spices like cinnamon to round things off.

Taste wise too, it was assembled with self-evident care and skill. Here it was saltier than the nose had suggested it would be – more salted caramel, more saline, a hint of olives, butter – to which were added lemon meringue pie drizzled with brown sugar and a tawny, rich honey, leading to a fully respectable finish that summed up all the preceding points – musky caramel, toffee, molasses, bon bons, vanilla, brine, honey and a good mocha, with a little sharpness added to round things off.

This is a rum that would never be mistaken for a Guyanese, Jamaican, Brazilian, Cuban, or French island rhum, ever, and in fact, my thought was that the closest it came to was actually a slightly more pot-still-driven Barbados pot-column blended rum like Doorly’s or the Real McCoy. The overall profile was not so much uber-complex as completely and solidly precise, each note coming into its own, distinctly and clearly, then being replaced by another one.  Never too many, never too few, nothing too demanding, always just enough to make for a seriously sippable drink that broke neither palate nor wallet.

Indeed, my feeling about this rum has always been that it wouldn’t scare anyone off the boat and would actually entice quite a few to come on board, not just to rums in general, but St. Lucia in particular. Because by all the measures of price, availability, brand recognition, overall taste, and approachability, the original Chairman’s Reserve just nails it. It’s a fair bet that most people wanting to dip their toes into St Lucia territory will start not with the Bounty rums, or the Admiral Rodneys (that premium cachet, rightly or wrongly, is not conducive to starter efforts), but with one of the Chairman’s Reserve expressions and they can all, every one of them, trace their ancestry back to this one original, the progenitor of the line. It’s a perennial classic for beginners or experts, for sippers, swillers or mixers, a mainstay of rum collections old and new, and it continues to call upon us to heed and hearken to its siren song. Few who do so walk away disappointed.